Hobbies are great! They give us the chance to explore our creative side, form friendships, travel, and get away from the stresses of daily life. Sometimes hobbies can even lead to better and more satisfying careers. This month celebrate your hobby! Throw a party for others who share your passion, consider signing up with an online site to sell your wares, or join a group of like-minded people. It’s also a wonderful time to share your talents with others—like the protagonist of today’s story!

Out in the pasture swatting flies with her tail and lumbering along with the rest of the herd, “Prudence looked like a full-time cow.” But when she had a little time off from her bovine duties, Prudence “was a part-time cow.” While being milked she was a scientist, reading a book on the milking process that she found “udderly amazing.” The salt licks were perfect blocks for architect Prudence’s wondrous structures. And engineer Prudence experimented with automatic lighting, even if the results in the water trough were a bit electrifying.

The other cows didn’t like it. They wanted Prudence to be more like them. She would never fit into the herd, they whispered to each other. Prudence fretted. She wanted to have friends and fit in, so “she decided to try to be like the others.” Dutifully, she went down to the pond with the rest of the herd for a little refreshment and was doing fine until… “she calculated the water temperature and wind speed. ‘Sixty-eight degrees and four miles per hour.’”

The other cows were miffed, especially Bessie, who said “‘Cows don’t calculate,’” while carefully counting her calves as she called them from the pond. Another day as the herd lazed under a tree, Prudence joined them, leaving only once to create a hat from an old wagon wheel, scrap of cloth, and piece of rope she found nearby. The other cows snorted. “‘Cows don’t create,’ said Patty as she jostled to find some shade.”

Even sleeping the same way as the others was difficult for Prudence. When she had a brainstorm in the middle of the night she just had to explore it—no matter how noise she made. The herd had given up. Alone and sad, Prudence thought and thought of ways to make the others like her. Then it hit her! “‘Cow Power!’” That night the barn rang with the sounds of her idea. But it wasn’t only one idea! When the herd woke and saw yet another contraption, they rolled their eyes and said “‘Not again, Prudence! What is this mess?’” Until…

Bessie saw the “cow-culator” Prudence had made to help her keep track of her calves. Patty was thrilled with the “portable shade tree” made from an umbrella, a saddle, and some dangly adornments. And Spotz thought his new guitar made from a shovel and fishing line was “gnarly.” Prudence was suddenly pretty popular! Even though “she knew she would always be a part-time cow,” she was happy to feel like a “full-time member of the herd.”

Jody Jensen Shaffer’s moooving and funny story of a cow with a scientific bent will delight kids. Little ones who think differently will empathize with Prudence’s wish to be herself while also fitting in with the herd. As the cows stand around in a pond and huddle under a tree, Shaffer offers a wink to the crowd mentality and peer pressure that can foster inaction and clone-like behavior. Prudence makes a gentle, but determined role model as a thinker who won’t be cowed by others’ opinions.

Stephanie Laberis’s cartoon-inspired illustrations of a herd of very distinct cows are a perfect accompaniment to this humorous story with a meaningful message. Prudence, with her fluff of pink hair, is happiest when fulfilling her creative visions. As the other cows disparage her efforts and isolate her from the herd, Prudence’s sad eyes and droopy tail and ears make the effect of their words obvious. Each page offers an opportunity for readers to discuss diversity, individuality, and what it means to be a friend.

Prudence the Part-Time Cow would be a wonderful addition to school and classroom libraries as well as to home bookshelves.

Find out all about Jody Jensen Shaffer and her books and magazine writing for children on her website!

Discover a gallery of illustration and craft work by Stephanie Laberis on her website!

Milk—regular or chocolate!—will taste so much better in a Mooo Mug  you make yourself! 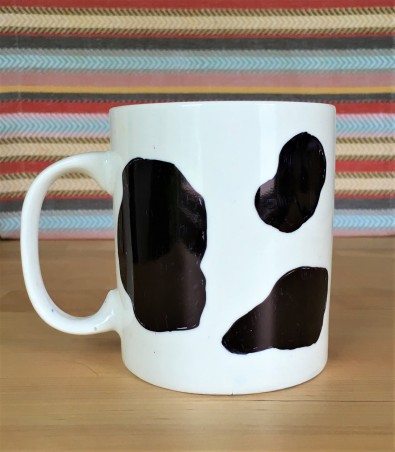