If you like to take a break from the routine or pressures of the work day and sew, garden, or read, play music, dance, or draw, or if you’ve always wanted to learn a new skill or develop a talent, then this month is for you! During National Hobby Month take some time to research a skill, art, or discipline that strikes your fancy and get started!

A Hat for Mrs. Goldman: A Story about Knitting and Love

One of the first gifts Sophia received when she was a baby was a knitted hat from her neighbor Mrs. Goldman. Now that Sophia is more grown up, she helps Mrs. Goldman make pom-poms for the hats she knits for other babies, friends, and neighbors. “‘Keeping keppies warm is our mitzvah,’ says Mrs. Goldman, kissing the top of Sophia’s head. ‘This is your keppie, and a mitzvah is a good deed.’”

One day in late autumn Sophia and Mrs. Goldman walk Mrs. Goldman’s dog Fifi. While Fifi is kept warm in a dinosaur sweater and Sophia is cozy in the fuzzy kitten hat and mittens that Mrs. Goldman made them, Mrs. Goldman’s head and ears are unprotected in the icy wind. When Sophia asks her friend why she doesn’t have a hat, Mrs. Goldman tells her “‘I gave it to Mrs. Chen.’”

Sophia begins to worry about Mrs. Goldman. Who will knit a hat for her? “Not Mrs. Goldman. She’s too busy knitting for everyone else.’” Last year Mrs. Goldman had tried to teach Sophia to knit, but it was too hard and took too long, so she decided to stick with making pom-poms. But Sophia thinks maybe it’s time to try again. She goes to her knitting bag and pulls out the hat they had started together. “The stiches are straight and even. The soft wool smells like Mrs. Goldman’s chicken soup.”

Holding the needles, Sophia thinks about what she was taught. Even though she drops stitches, she continues to knit. “She wants to make Mrs. Goldman the most special hat in the world.” The next day snow falls on Mrs. Goldman’s head as they walk Fifi. Sophia frets, and at home she begins knitting morning, noon, and night to finish her hat. Winter has set in and one day when the pair walk Fifi, “Mrs. Goldman wraps Mr. Goldman’s scarf around her head like she’s a mummy.” But the wind grabs it and rips it away. Sophia catches it, but shivers at the thought of how cold Mrs. Goldman must be.

At home Sophia knits in a frenzy, adding row after row of stitches until the hat is finished. When Sophia looks at it, though, she finds holes where they shouldn’t be and lumpy and bumpy areas. She thinks what she has made looks more like a monster than a hat. Sophia takes out the box containing all the hats Mrs. Goldman has made for her, but they are much too small for Mrs. Goldman to wear. While Sophia’s mama and papa have hats made by Mrs. Goldman, she knows she can’t give those away.

Sophia imagines all the hats she makes with her neighbor and how Mrs. Goldman always tells her that her pom-poms add beauty, and that “‘that’s a mitzvah too.’” Sophia’s heart swells. She finds red yarn—Mrs. Goldman’s favorite color—and her pom-pom making supplies and goes to work. When she is finished and the pom-poms are attached, “Mrs. Goldman’s hat is the most special hat in the world.” 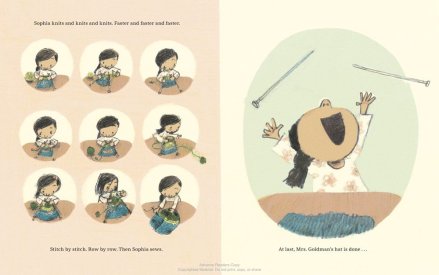 Sophia runs next door and surprises Mrs. Goldman with her gift. Mrs. Goldman hugs Sophia and tears come to her eyes. “‘Don’t you like it?’” Sophia asks, but she needn’t worry. “‘I more than like it, I love it,’ declares Mrs. Goldman. ‘Gorgeous. Like Mr. Goldman’s rosebushes. And you know how I love his roses.’” With a kiss for Sophia, Mrs. Goldman begins counting the twenty pom-poms on her hat—“each one made with love.” Mrs. Goldman slips the hat on her head. Now when she and Sophia take Fifi for a walk, Fifi wears her dinosaur sweater, Sophia wears her kitty hat and mittens, and “Mrs. Goldman wears her Sophia hat. Her keppie is toasty warm. And that’s a mitzvah.”

Michelle Edwards’ heartwarming story of a little girl who sees that her friend is in need and determines to help draws on children’s natural generosity and shows readers that their efforts are recognized and appreciated. Edward’s gentle and well-paced storytelling allows readers to understand the events and thoughts that bring Sophia to once again attempt knitting. Sophia’s solution to use the pom-poms she knows she makes well (and with love) to cover the holes demonstrates not only the ingenious creativity of kids, but also the idea that love can fill the voids in life.

Brian Karas imbues the story of Sophia and Mrs. Goldman with a magical wonder that floats from page to page like the fluffy snowflakes that are the catalyst for Sophia’s mitzvah. A combination of full-page illustrations and snapshot images show days spent with Mrs. Goldman as well as the moments, hours, and days that adorable Sophia spends knitting her special hat. Sophia, tongue sticking out in determination, wields her knitting needs; she ponders her holey hat while imagining a frightened Fifi; and scraps of red yarn dot the floor and even sit atop Sophia’s head as she creates pom-pom after pom-pom. When Mrs. Goldman pulls the hat over her own head, kids will feel cheered, while adults may feel a small lump in their throat.

A Hat for Mrs. Goldman is a gem. Its tender portrayal of kindness, love, and close personal relationships makes it an outstanding choice for any child’s home library.

Discover more about Michelle Edwards and her books, plus activities, recipes, and information on knitting on her website!

Enter a gallery of books, sketches, blog essays, and more by G. Brian Karas on his website!

These kids have all lost their hats! Can you follow the paths in this printable Winter Hat Match Puzzle to reunite each child with the right hat?