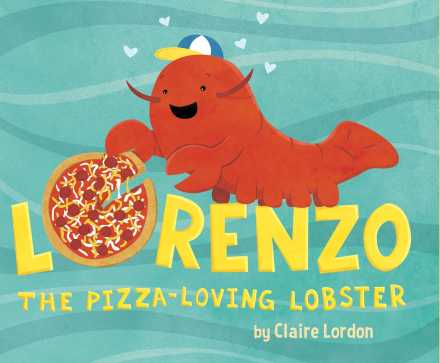 Once considered the food of Italy’s poorer classes who could not afford the prices of meat, cheese pizza has risen in stature to become a favorite of all. While perfect all on its own, cheese pizza is also a delicious beginning to any combination of ingredients—well, maybe not all, as the characters in today’s book discover!

Lorenzo is one adventurous lobster! Not only does he like exploring new places, he loves getting his claws on new foods. One day while at the beach, Lorenzo meets a seagull who has found a tasty slice of pizza to nosh on. “‘What’s that?’” Lorenzo asks, “‘It smells amazing!’” The seagull tells him and invites him to try it. Lorenzo takes a nibble…and then a bigger bite. He loves this pizza thing so much that he eats it all up.

On his way home to tell his friends about his discovery, Lorenzo runs into Kalena, his turtle friend, and tells her all about the triangular food that is “‘crispy and chewy at the same time; salty, tangy, and full of flavor, too!’” Kalena is intrigued and suggests they try to make one themselves. At Lorenzo’s house they begin gathering the ingredients, but when Kalena asks what was in the pizza Lorenzo can’t remember. Kalena looks in the cupboard and pulls out seaweed cake and kelp paste. “‘Perfect!’” agrees Lorenzo. For the “stringy” part, Kalena suggests eelgrass, which also has the benefit of being extra salty. And the “round things on top”? Sand dollars sound delicious!

So the pair bake up their green concoction, and when the timer rings they dig in only to find that it “‘isn’t quite right.’” Not one to give up, Kalena offers a new set of ingredients: “‘kelp dough, squid ink, algae, and coral rings.’” This pizza isn’t right either—in fact, Kalena says, “‘This tastes icky! And the algae is stuck in my teeth!’” Suddenly, Lorenzo has a brainstorm. He remembers that the pizza was made of “‘sponge patties, jellyfish jelly, seaweed noodles, and seashells.’”

Listening to that recipe, Kalena isn’t so sure, but they make it anyway. When this creation comes out of the oven, one small nip convinces Kalena that this one is “‘gross.’” Poor Lorenzo—he so badly wanted to make a delicious pizza with his friend. Kalena leaves Lorenzo’s house with the distinct impression that pizza is terrible. But as she heads up the beach toward home, she smells a delicious aroma. Coming closer she spies a “round food,” and buys one.

With one bite, she’s smitten! This round food is “‘so chewy, and salty, and…wait a minute.’” It dawns on Kalena that this might be the very pizza Lorenzo was talking about. There’s just one thing—why is it a circle? Even though Kalena wants to devour the whole thing, she thinks about how sad Lorenzo was and hurries back to his house with the steaming box. Sure enough, Lorenzo is moping about the afternoon’s debacle.

“‘Hey Lorenzo, look what I found!’” Kalena calls. “‘Holy anchovy!’” Lorenzo exclaims when he tastes it, “‘This is exactly like the pizza I had earlier, but this time it’s big and round!’” They are so excited to dig into their treat, but they carefully study the pizza’s ingredients before eating it all up. One pizza just isn’t enough, so Lorenzo and Kalena make another…and another…and another—and share them with all their friends at a huge pizza party.

Who knew pizza and the ocean had so much in common—the same salty tang, the same appealing aromas, the same recognizable shapes? Claire Lordon, that’s who! In her funny culinary adventure, Lordon captures the enthusiasm children have to share and replicate a new discovery  but also presents the moments of disappointment when reality and memory don’t match. Kids will “ewww…ohhh…yuck…and yuck it up at the alternative pizza ingredients Lorenzo and Kalena combine in their attempts at a “normal” pizza. These two friends are sweetly supportive of each other through kelp paste and pepperoni and know how to share life’s ups and downs.

Lordon’s adorable sea creatures populate very vivid underwater and beach environments that will be as vibrantly familiar to kids as their own homes and playgrounds with an oceanic twist. Images of the alternate ingredients are clever adaptations of the elements of a normal pizza as Lorenzo remembers the shapes but not the names of the fixings.

Lorenzo, the Pizza-Loving Lobster is a delicious ingredient to add to any child’s bookshelf, and kids will no doubt want to build their own pizzas just like Lorenzo—a crustacean who really knows his crust!

Learn more about Claire Lordon and her work on her website!

Play this fun game to build your pizza ingredient by ingredient before the others! For 2 – 8 players.

Q & A with Claire Lordon 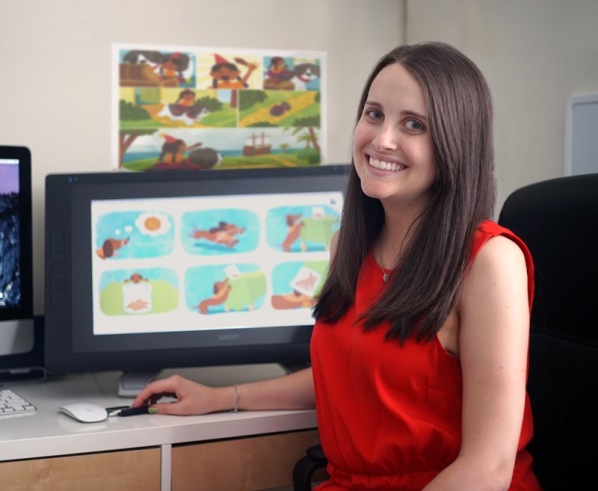 Today I’m thrilled to feature a fun interview with the delightful Claire Lordon in which she discusses her influences, her work, and one special “Rhodie” who turned out to be a very lucky lobster!

What were some of the books you enjoyed most as a child and why?

I had many favorite books growing up!  One of my favorites was The Biggest Pumpkin Ever by Steven Kroll. I think I liked this book so much because it had a competition in it and it was also about Halloween (two things I love!). I also enjoyed The Little Mouse, the Red Ripe Strawberry, and the Big Hungry Bear; Corduroy; Tops and Bottoms; Madeline; Curious George; Clifford the Big Red Dog; the Dr. Seuss books; and SO many more.

Lorenzo the Pizza-Loving Lobster is your debut picture book. What influenced you to write it?

Many people have asked me how I got my inspiration for this unique idea – a pizza-loving lobster! The answer is a bit silly and has a story behind it.

It started when I was back in college and my boyfriend and I were at a gift shop that sells Rhode Island merchandise (we went to school in Rhode Island).  My boyfriend noticed a cute lobster stuffed animal and said how much he liked it because it reminded him of a pet crawfish he had growing up. 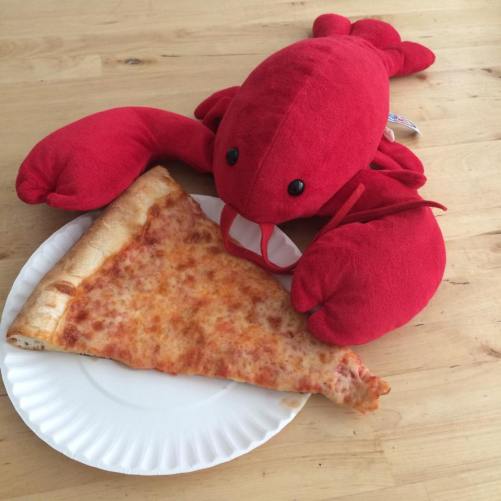 When his birthday came around I decided to give him the stuffed animal lobster that he had admired months earlier.  We chose the name “Rhodie” for the lobster stuffed animal because his backstory is that he is from Rhode Island.  Somehow, one day when we were eating pizza we decided that Rhodie was Italian and loved pizza. It became a joke and I thought how ridiculous it was that a lobster loved pizza!

I thought this would make a great character in a children’s book.  After many revisions and many sketches later Lorenzo, the Pizza-Loving Lobster is now an actual book!

What have you found to be the best part of writing and illustrating a picture book?

The best part, at least recently, has been having others contact me about my book. It could be a simple tweet showing it on the shelves in California or an e-mail saying how much a grandchild loves ‘Lorenzo’. It makes me so happy to know that others love my work too! 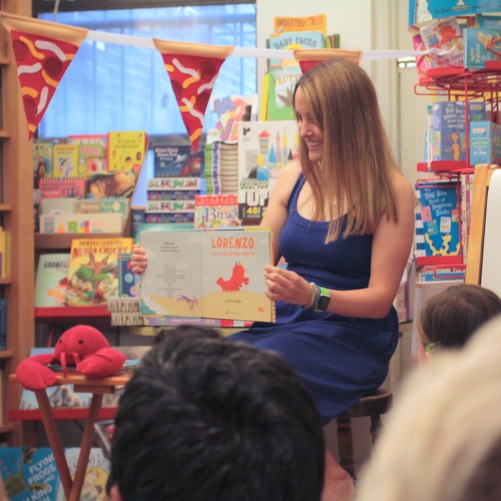 Your slogan is “Made with a Smile.” Can you talk about your philosophy and what influences your illustration work?

I strive to create art that makes me, and others, happy. My hope is that my art brings the viewer joy and even make them laugh. The influences for my work include traveling, being in nature, and reading many children’s books. I like to have my work be bold and fun.

Can you describe your work space a little?

My studio space is in my apartment in Brooklyn. It consists of a computer, a Cintiq monitor, and a desk for drawing and painting. I also have a giant printer and a scanner. 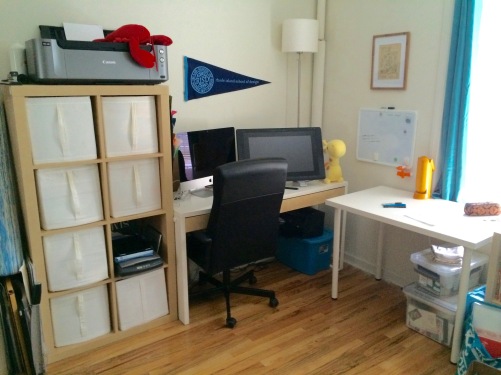 Do you have any other books on the horizon?

At the moment I am ‘shopping’ around a book about a penguin named Bento who is apprehensive about school picture day. I also have two more manuscripts that I’m storyboarding.

Since Celebrate Picture Books is a holiday-themed blog, I can’t let you get away without asking you a few holiday-related questions.

What is your favorite holiday?

My favorite holiday by far is Halloween. I love that it’s during the fall, with all the changing colors of leaves. My favorite parts are dressing up as a fun character as well as decorating and carving pumpkins. I also like to celebrate small holidays that I discover, such as grilled cheese sandwich day!

Growing up I never had a store-bought Halloween costume. I would design my own costume and my mom and I would go to the fabric store to see how we could create the design. Then my mom would work her magic and sew a unique costume for me. I’ve been a candy corn, a Beanie Baby, a fairy, and more!

Has a holiday ever influenced your work?

One of my new manuscripts I’m storyboarding now is about Christmas. My family always had a great collection of Christmas books when I was growing up, and I hope this one can make it into the collection someday!

Thanks, Claire! I wish you all the best with Lorenzo, the Pizza-Loving Lobster and your future books! 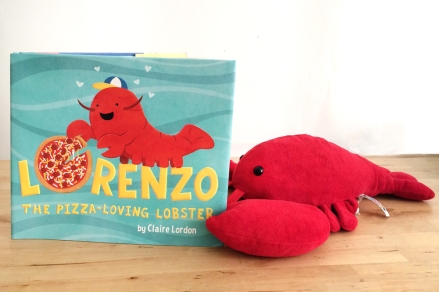 You can find Lorenzo, the Pizza-Loving Lobster at: