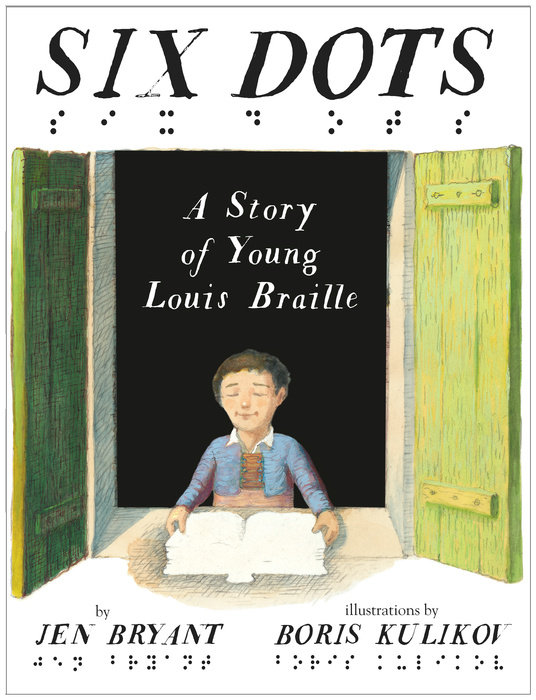 Avid readers, rejoice! Today is your day – a whole 24 hours dedicated to the fine pursuit of perusing an old favorite or a newly discovered book! To celebrate visit a local bookstore or library then find a cozy nook or shady spot and settle in for a good, long read.

When Louis Braille was born he was so small that no one in town expected him to live. But he did! Louis thrived and with his curious eyes took in everything around him. Louis was smart, too, with a prodigious memory for names and stories. His father worked with leather, making harnesses and bridles. Louis wanted to be just like him and often reached for the sharp tools on the workbench, but his father always warned him away.

One terrible day, however, when Louis’ father glanced away, Louis grabbed an awl and tried to work it into the smooth leather, but it slipped. Louis’ damaged eye was bandaged and he was told not to touch it. But when the bandage began to itch, young Louis couldn’t help himself and spread the infection to his other eye. By the age of five, Louis was left in darkness, unable to see the faces of those he loved or the attractions of home.

Louis learned the sounds of the world. He discovered the number of steps around his house, to the outbuildings, and eventually to the shops and businesses in town. His brother taught him how to whistle and use the reverberations to avoid obstacles. He also learned to feel the shapes of letters made of straw, leather, or nailed replicas made by his family. He played dominoes by feeling the dots with his fingers.

While Louis listened to others read to him, he longed to be able to read on his own. Whenever he asked if there were books for blind people, however, the answer was always, “No.” A noblewoman who lived nearby heard of Louis and invited him to study at the Royal School for the Blind in Paris. At the age of 10 he moved to the boarding school.

The Royal School was anything but sumptuous. Louis’ room was crowded, damp, and dark. His uniform itched, and meals were meager and cold. He so wanted to return home, but the promise of books for the blind kept him there. Those books were reserved for the best students, and Louis vowed to be one. Finally, Louis was led to the library. A book thudded onto the table in front of him. “‘Voila! There it is,’” the guide said.

Louis opened the book. To read it he had to feel the raised letters, but the letters were huge and a page only held a few sentences. To make matters worse, the book consisted of only a few pages. “‘Is that all?’” Louis asked. The guide told him there were others but that they were all the same. More than ever Louis wanted to go home. 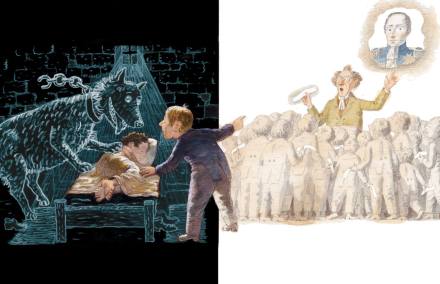 In the morning Louis was shaken awake; the headmaster had an important announcement.  It seemed that a French army captain had devised a secret code read by touch instead of sight. This code could be used at the school, the headmaster said. The code consisted of raised dots set in patterns that represented various sounds. The boys learned the new code then learned how to write it, using an awl-like implement that punched dots into paper.

While the code was a breakthrough, it was hard to learn and all the other boys in the school had given up—but not Louis. Still, reading the code was not like reading a book with letters, words, and sentences. Louis asked the headmaster if the army captain would work with him to improve the code, but when the headmaster asked, the answer was “No.”

Louis knew what he had to do. Night after night he punched dots into paper with the awl-like tool—just as he had watched his father do with leather. He tried “hundreds of ways to simplify the captain’s code.” Three years passed, and Louis turned 15. Finally, he had a workable solution. He asked the headmaster to read to him a book he had never heard. As the headmaster read, Louis copied his words, punching letters onto paper. Louis’ “new code used just six dots, arranged in two columns, like dominoes. Each dot pattern stood for a letter of the alphabet.” 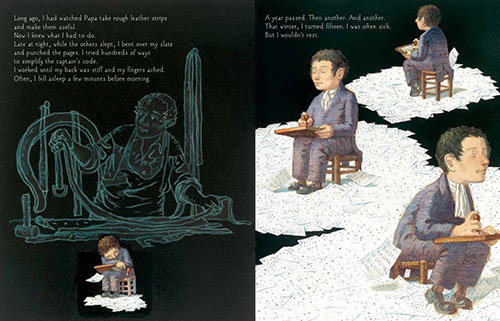 When the headmaster finished reading chapter 1, Louis turned his pages over and “reading by touch, recited the entire chapter.” After that “word spread quickly. The other students rushed to try it. Si facile! ‘So easy!’ Et si vite! ‘And so fast!’ ‘We can read words and write letters like everyone else,’” the other boys exclaimed.

As Louis watched his friends read he remembered watching his “Papa in his shop, bent over rough strips of leather, making them useful. I had become like him, after all,” Louis thought.

An Author’s Note, more fascinating biographical information about Louis Braille’s life and other inventions, resources, and the Braille alphabet follow the text.

In her Author’s Note Jen Bryant says she wanted to express what it felt like to be Louis Braille. In Six Dots she succeeds in bringing the story of this very young inventor and genius to life with details of his accidental blindness, family support, school experiences, and ultimate victory. Told from Louis Braille’s point of view, the story has an immediacy that presents Braille’s frustrations, challenges, and achievements sensitively and honestly. His perseverance against all odds will inspire readers and give them a new perspective on the unique person Braille was, the importance of books for all, and what children not much older than the readers of Six Dots can accomplish.

Boris Kulikov’s mixed media illustrations take readers back to the France of the early 1800s, depicting with soft colors and period details the town, people, and influences in Louis Braille’s life. Braille’s initial accident is treated with thoughtful consideration of the book’s audience, and his blindness and dreams are portrayed with transparent outlines on a black background. Readers will be interested to see how Louis’s family and friends supported and helped him (an unusual occurrence of the time). As Louis grows, readers discover his other talents for music and sewing, and the tools Louis used to produce his Braille pages are clearly shown.

View Jen Bryant’s website for activities, videos, and links related to Six Dots—you’ll also discover more of her books too!

To see a gallery of images by Boris Kulikov for books and other illustration work, visit his website! 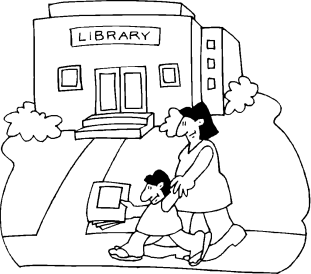 I Love the Library! Coloring Page

Today is a perfect day to visit your library and check out some awesome books! Here’s a printable I Love the Library! Coloring Page for you to enjoy too!