Every day bullying affects children and adults across this country and worldwide. Overt and subtle, in person and online, bullying destroys happiness, taints school and workplace environments, and sows an atmosphere of distrust and discord. Who can help? Each one of us! National Bullying Prevention Month reminds us that by treating others kindly and with empathy, our world can become a friendlier, more harmonious place. Instituted by PACER’s National Bullying Prevention Center in 2006, the holiday encourages people to think about how they treat others and provides assistance for schools and others to make positive change. To learn more about what you can do as well as to find classroom toolkits and other resources and information on Unity Day, celebrated on October 24, visit PACER’s website.

Two Lions sent me a copy of What If Everybody Said That? to check out. All opinions are my own. I’m also happy to be partnering with Two Lions in a giveaway of the book. See details below.

What If Everybody Said That?

At the playground a little girl dressed as a pirate and standing on the prow of her sandbox ship greeted three boys wanting to play with, “‘No boys allowed.’” Their mom overheard her and yelled, “‘What if everybody said that?’” If everybody did say such things would the play tube be off-limits to kids with freckles or the swings forbidden to big kids or the ladder for boys to climb only? That would make some kids pretty mad.

In art class the girl looked at the other kids’ drawings of dogs. She admits she said: “‘Those don’t look like dogs to me,’ and I laughed.”“‘What if EVERYBODY said that?’” her teacher asked. Then most kids would crumple up their work, throw it away, or even decided they would “never draw again.” At sharing time, this little girl threw a fit because she wanted to be first and talk about her new shoes. What happened? “Our teacher frowned at me and said, ‘What if EVERYBODY said that?’” What an uproar that would cause as all the kids clamored to show their special things.

When the girl told a boy in her class that his new glasses made him look funny, the principal called her on it. Imagine how the new girl would feel if she saw the texts between two of her classmates, monstagurl15 and badfish8—“Those braces!” “LOL!!! Metal Mouth” “What’s w/the flowers in her hair?” “W.e.i.r.d.o!” “Tohhhtallly.”—when she thought the flowers looked pretty and there’s nothing you can do about braces. 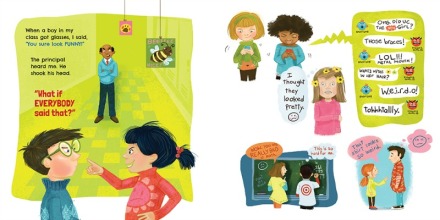 What if no one in the world would share or send others good wishes? What if everyone scared others for a laugh and quit as soon as things didn’t go their way? What kind of world would it be if no one became friends? Finally, the little girl reflects on her attitude toward others and realizes what her life would be like if she was all alone. She has a change of heart, apologizes to the new girl in the neighborhood that she ignored, and invites her to play.

Now she asks readers to imagine what life would be like if everybody said things like “‘Let’s be friends.” “Welcome to the neighborhood!” Oh! Your cat is sooooo pretty!” The world would be an awesome place if everyone invited others along on life’s journey.

Through one girl’s self-described journey to enlightenment, Ellen Javernick powerfully engages readers in thinking about how what they say and do affects others. As the girl relates circumstances in which she snubbed others, put herself first, insulted other kids’ efforts, and was mean in many other ways on the left-hand page while on the right-hand side are several more examples of the results of bullying behavior. Javernick’s examples are realistic and span a wide range of types of bullying from hurtful comments to snarky texts to thinking only of oneself. Each page offers opportunities for discussion, reflection, and learning.

Colleen Madden’s emotion-filled illustrations show  what kind of world we would live in if everybody rejected, ignored, and bullied others. Faces of the children and adults clearly show emotions of smugness, anger, disappointment, and sadness. Sprinkled throughout in thought bubbles and as decorations are emojis that readers will recognize and understand. Madden’s images work hand-in-hand with Javernick’s story to give both kids and adult readers much to think about.

An excellent book to discuss how one person’s words and actions affect others, What If Everybody Said That would be a terrific addition to home, classroom, and library bookshelves.

What If Everybody Said That? Giveaway

To be entered to win, just Follow me on Twitter @CelebratePicBks and Retweet a giveaway tweet during this week, October 17 – 23. Already a follower? Thanks! Just  Retweet for a chance to win.

A winner will be chosen on October 24.

Giveaways open to US addresses only. | Prizing provided by Two Lions Publishing. 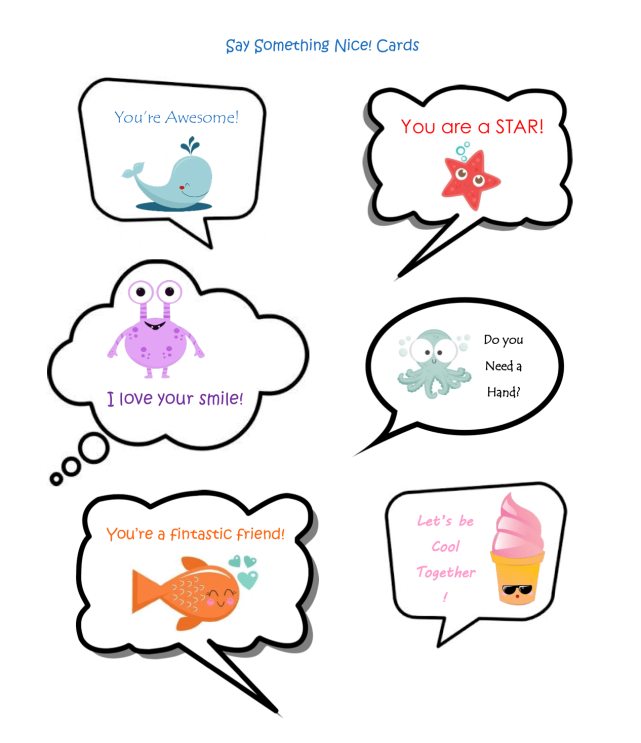 Do you want to give someone a nice surprise? Print out these cards and give one to a friend, to someone you’d like to know, or to anyone who looks like they need a pick-me-up! If you’d like to make your own cards, print out the blank template and write and/or draw your own message! You can also print these on adhesive paper and make your own stickers.

You can find What If Everybody Said That? at these booksellers 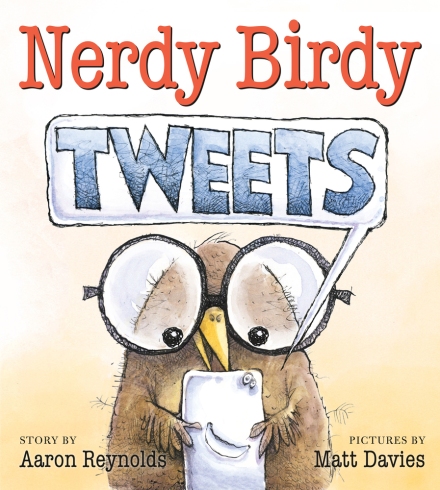 Established in 2010 by Mashable, today’s holiday commemorates all the changes in the way people talk, share, and interact that social media has made possible. Going back to 2002 and the introduction of Friendster, 2003’s MySpace, and 2004’s Facebook, the way in which people share news, photos, serious events, silly moments, and all types of life happenings has exploded. Amidst all the tweets, snapchats, and instagrams, though, it’s good to remember that the best way to spend time with friends is in person, making memories that will last forever.

Nerdy Birdy and Vulture are best friends even if they are a little…well, a lot…different. While Nerdy Birdy’s favorite thing to do is play video games, Vulture spends her time “snacking on dead things.” There are three things, though, that they have fun doing together. They love to “make fun of each other’s lunch, make silly faces, and take goofy pictures of each other.”

One day while Nerdy Birdy was on his phone, he found a new game called Tweetster. The game was fantastic because you could make lots of friends, play games with them, and “tweet messages and pictures for them all to see.” Vulture thought it all sounded pretty boring even though she tried to sound supportive. In an hour Nerdy Birdy already had fifty new friends. Over the next few days he gained hundreds of other friends and discovered that some of them were really neat—like a flamingo, an ostrich he played games with, and a puffin from Iceland.

Vulture tried to remind Nerdy Birdy that she was pretty cool herself and that she was “dying of boredom.” Nerdy Birdy took note—but only partially because he was too busy looking at all the new stuff on his phone. Eventually, Vulture gave up trying to lure Nerdy Birdy back and flew away. It was nighttime before Nerdy Birdy even noticed. The next day Vulture was back with a surprise: she was now on Tweetster too.

“They tweetstered—TOGETHER!—all morning.” Then at lunch they stopped playing and had fun like they used to. But after lunch when they went back to tweetstering, Vulture discovered a shocking picture. Nerdy Birdy had tweeted a pic of Vulture eating an old chicken leg with the caption from @NerdyBirdy that read: “@Vulturegirl is a messy eater. She eats dead things. EWWWWWWW!!” When Vulture showed him her phone, though, Nerdy Birdy was nonchalant. He thought it was funny, that’s all. But Vulture was embarrassed and upset that Nerdy Birdy hadn’t thought about her feelings.

Vulture flew off, and this time she hadn’t return even after a week had passed. Nerdy Birdy didn’t know what to do. He decided to ask all of his new friends for advice. He waited and waited, but no one tweeted back. It took a whole day before anyone answered, and even then he got only three responses. @Puffinstuff wondered what Nerdy Birdy expected him to do about it since he lived in Iceland; @Ostrich49 thought the situation was pretty funny and offered an LOL; and @Pinkflamingo7 suggested Nerdy Birdy was a bird brain.

While these replies were unhelpful in solving Nerdy Birdy’s problem, they were “super-duper helpful” in another way. Nerdy Birdy closed his game and took off. He flew everywhere looking for Vulture and finally found her in an oak tree. He landed on a nearby branch and began to apologize. Vulture listened and then asked, “‘What about your five hundred Tweetster friends?’ Nerdy Birdy shrugged. ‘One real live you is worth a thousand Tweetster friends,’” he said. So now Nerdy Birdy and Vulture are back to being best friends. Some days they do what Nerdy Birdy wants, and some days they do what Vulture wants. “And some days they even get together…and Tweet!” at the top of their lungs. 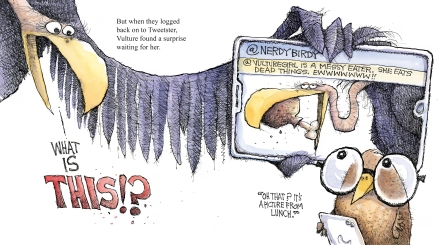 Aaron Reynolds’ sweet Nerdy Birdy is back and just trying to fit in with the Internet crowd on Tweetster. There’s so much fun and so many friends to be had! But when Nerdy Birdy gets caught up in the impersonal world where someone’s joke is another one’s hurt, he learns the true meaning of friendship. Reynolds’ relationship and dialogue between two opposites who happen to be best friends rings true as Vulture finds her friend drifting away but tries to stay supportive and even join in. Reynold’s humor highlights Nerdy Birdy’s obliviousness to Vulture’s feelings, allowing readers to understand that their actions sometimes have far-reaching consequences. The two birds’ agreement to compromise is a wonderful example of true friendship, and children will cheer when Vulture and Nerdy Birdy go back to being besties.

Matt Davies’ dry wit is on full display from the cover—where Nerdy Birdy’s phone has a persona of its own—through to the end where the body of a dead raccoon is discreetly covered up by a text box. In between, Davies’ squiggly lines and crosshatch style draw two of the cutest birds you’ll ever see. While Vulture may be a scavenger, she likes to eat her meals from a Hello Birdy lunchbox, and Nerdy Birdy’s oversized glasses reflect his owlish capacity for wisdom.

When Nerdy Birdy hides behind his phone as he plays game after game with his new friends, the camera and banana logo on the back are transformed into a mask that hints at the changes Nerdy Birdy is undergoing. As Nerdy Birdy collects friends, the pages become wallpapered in more and more Tweetster friend notification announcements to show his growing number of followers. Readers will giggle at the dead snacks here and there and recognize all the references to texting and game playing that make this story a modern cautionary tale.

Nerdy Birdy Tweets is a timely friendship story that entertains while it enlightens, which makes it a book kids will Like on their home bookshelves and in their classrooms.

Discover more about Aaron Reynolds and his books on his website

To learn more about Pulitzer Prize-winning cartoonist Matt Davies and his work, visit his website.

The Internet has added many new words to our language as well as redefining old ones. Search for twenty-two Internet-based words in this printable Trendy Trending Word Search Puzzle. Here’s the Solution!

You can find Nerdy Birdy Tweets at these booksellers