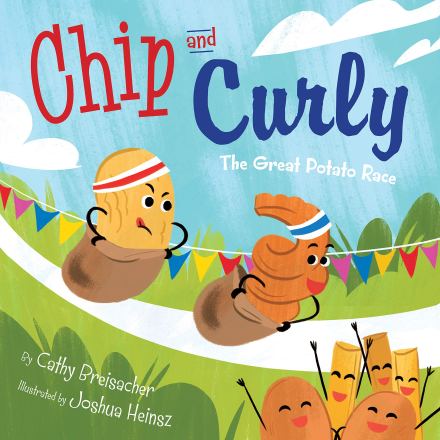 Feel like your diet is out the window what with staying home or ordering take out? Has good nutrition taken a hit because ingredients are at a premium? Don’t stress! Today’s holiday gives you permission to eat that doughnut or cupcake or pizza or whatever you want without feeling guilty. Besides, sometimes indulging a little jumpstarts your metabolism and provides motivation for the long haul. Lately, I’ve been craving French fries, so in honor of that, I’m celebrating two best spuds that are fry-tfully good sports.

Spud City was about to hold its annual festival, and everyone was excited. Chip was practicing for the sack race. This year “he was determined to win the first-place prize: a Golden Bushel Award.” But a new spud in town—Curly—had a “spring in his step” and seemed to be real competition. Even though the other potatoes cheered him on, Chip was nervous.

On the day of the festival, the race route was lined with spectators. The couch potatoes lounged near the path while “the French Fries stood with their Tater Tots.” Even the sweet potato cheerleaders were waving pompoms and shouting. Just before the race began, Curly took a place next to Chip at the starting line.

When the whistle blew, Chip took off. He was in the lead until he heard someone behind him. “‘Look out!’ the BBQ Chips shouted. ‘Here comes a hot potato!’” Chip raced on, but then Curly bounced in front of him and even though Chip gave it his all, he couldn’t catch up. A moment later, though, Curly tripped and fell, leaving the path—and the race—wide open for Chip.

Chip hopped past Curly and was in clear sight of the finish line when he realized “he felt rotten.” He glanced back and “hashed it over in his mind.” He decided the only right thing to do was to go back. He offered Curly a hand up, and together they bounded down the route and past the other racers. But Curly was too quick for Chip, and he broke through the tape first. “In an instant, Chip’s dreams of winning were mashed.”

Chip was just about to leave when Curly asked him to be his partner in the relay race. Curly thought they made a great team. They practiced until they found their groove. Everything was looking good until a new team showed up….

Kids will devour Cathy Breisacher’s pun-filled romp that takes them to Spud City’s annual festival, where Chip and Curly face off to win a Golden Bushel Award in the sack race. While Chip pulls out to an early lead, Curly bounces back and threatens Chip’s years-long dream to win. A misstep by Curly gives Chip the opportunity to achieve his goal, but in his decision, Breisacher shows readers true sportsmanship and integrity. Curly also displays the qualities of a gracious winner, and as the two work together to perfect their relay skills, a friendship sprouts. The final scene offers a funny “oh, no!” moment while also reminding readers that winning can be fleeting, but friendship and staying true to oneself endure.

Joshua Heinsz populates Spud City with a wide array of taters—from tots to waffle fries, sweet potatoes to twice-bakeds, French fries to home fries, and more. Heinsz adds plenty of visual humor to the mix with clever street sign and shop names, and the couch potatoes are, ingeniously, those impossible-to-peel curved ones that lurk in many a 5-pound bag. Kids will love picking out their favorite kind of potato, and the expressive spuds will have readers captivated from the very first page.

For rollicking story times that also offer opportunities to discuss the nature of competition and friendship, Chip and Curly, The Great Potato Race is one to add to your home, classroom, or library shelf.

Learn more about Cathy Breisacher and her books on her website.

To learn more about Joshua Heinsz, his books, and his art on his website.

A Chat with Cathy Breisacher 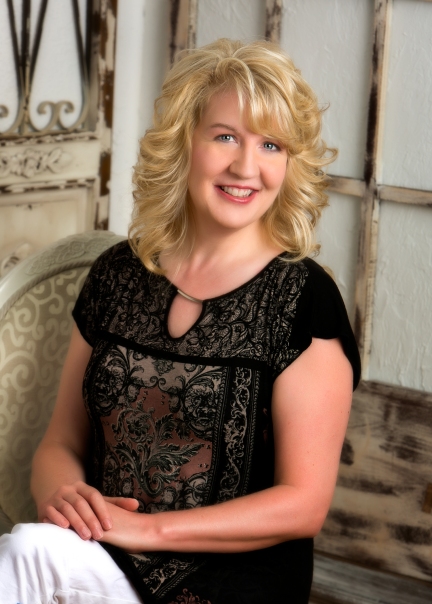 It’s so great to be talking with you again! This must be a really exciting—and busy!—time for you, so I’m thrilled to have you stop by!

You’ve mentioned that the inspiration for this story was a local potato festival. Can you describe that event a bit and tell what sparked the idea for Chip and Curly?

Every year, on the last Saturday in September, a town not far from where I live holds a Potato Fest.  The county where it is located is the second-largest supplier of potatoes in the state. People come from all around and a good portion of the downtown area is closed off for the event. There are tons and tons of vendors selling a variety of crafts, and the food vendors whip up all kinds of potato treats: sweet potato fries, potato candy, baked potatoes, pierogi, potato soup, French fries, potato bread, etc. There is live music as well as games for the kids. I love the fall season, and this is a great kick-off to the fall. I try to attend every year. So, in 2016 when I wrote this story, I thought about the potato festival and all of the kinds of potatoes that are sold at the event.  The names CHIP AND CURLY came to me and the idea for the story just flowed from there.

Of course, I have to ask—what’s your favorite kind of potato? Do you have a favorite recipe? Would you like to share it?

I love twice baked potatoes. They are probably my favorite. But, there really isn’t a potato I don’t like. I also love perogies and sweet potato fries. Oh my goodness…it’s hard to choose just one.

I’ll share a recipe for Cheesy Hash Brown potatoes that are gobbled up at many family events. They are so easy to make.

Being competitive can take so many forms. Do you consider yourself competitive? If so, in what way?

Yes, I’m definitely competitive. I always want to put 110% into things that I do. If there is a challenge of some sort, I am in it to win it. J In the past couple of years, I’ve been intrigued with Escape Rooms and trying to solve all of the clues before the time runs out. Recently, I heard of an Escape Room that no one has “broke out of” yet.  I want to be the first! J

Chip and Curly is loaded with puns and really clever word play! The story must have been a blast, but also challenging to write. Can you talk a little about how you put it all together?

Chip and Curly was definitely a fun story to write. I just pulled out my first version of this story, and it has so few puns in it. I didn’t initially write this story to be punny.  But, as I was doing my first set of revisions, a pun popped in my head.  More puns came to me as I continued to revise. It wasn’t long before I knew this had to be a story that centered on potato puns. I scoured the Internet to find words associated with potatoes. I must have looked at every list that exists online. The tricky part was to include those words and phrases that fit nicely with the story. I didn’t want to include something just to include it if the word or phrase really didn’t flow with the storyline. My amazing editor, Sarah Rockett, had excellent suggestions for tweaking the story a bit more after she acquired it. And I was delighted with the fun, playful, colorful art provided by the illustrator, Joshua Heinsz.

After practicing for a year to win a Golden Bushel Award for the sack race, Chip makes a surprising decision part way through the race. What would you like kids to take away from the story?

This is the crucial part of the story. I want kids to know that competing can be a lot of fun. And it can feel good to win at something, too. However, practicing good sportsmanship is important and helps build character. When we show respect toward our opponents, we can still have fun and compete, but it helps us to keep our focus on what’s most important—treating one another the way we want to be treated.

Since CaveKid Birthday was released in March, what’s been the best part of being a published author? The most surprising? As a librarian, how does it feel to see your own book on your library’s shelf?

Gosh, there is so much I am enjoying about being a published author. I love meeting new people (kids and adults) at book events and talking with them about stories. It has also been a treat to see friends and family who I haven’t seen for a while. Being a school librarian, I get an extra treat when kids ask to check out my book. That has truly meant the world to me. When my students tell me they love my books, my heart just completely melts.

During our first interview for CaveKid Birthday how did I miss that you’re from Hollidaysburg, Pennsylvania? Does the town live up to its celebratory name? Do you have a favorite town celebration or spot to write or visit?

Hmmm…very good question. The town where I live is a true community. People really get behind and support the schools, sports teams, agencies, fundraising events, etc. So I guess you can say that the people who live in Hollidaysburg celebrate one another’s aspirations and accomplishments. I am proud to live in this town. I do have a few favorite spots that I like to visit. There are a couple of parks that are so beautiful and serene. They are a great place to spend timejyeither alone or with family and friends. As for a favorite town celebration, I would have to say the Winterfest Light-Up Night that is held at the end of November each year. There are festivities in the downtown area and everything is decorated for Christmas. Local restaurants hold soup samplings and people vote on their favorite. Santa arrives and a giant tree is lit up that evening. There are ice carvings, too. It’s such a fun night and everyone is in the holiday spirit.

Thanks, Cathy! I can’t wait to try those delish-sounding potatoes! I know you’ll have lots of fun with Chip and Curly, and I wish you all the best with all of your books!

You can connect with Cathy Breisacher on

If you love potatoes, you can never get enough! Race to fill your plate with all six kinds of potatoes in this fun game! 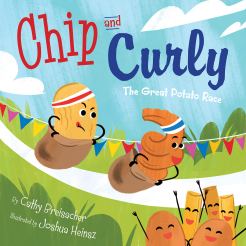 You can find Chip and Curly, the Great Potato Race at these booksellers