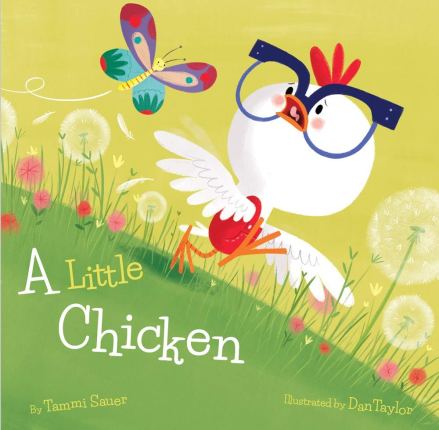 “Dot was a little chicken…who, let’s face it, was a little chicken.” There weren’t many things Dot wasn’t afraid of, including garden gnomes. Even though “Dot tried to be brave,” even the simplest things and the gentlest creatures frightened her. One day, though, while she was adding making their coop more secure, Dot knocked one of her siblings off the nest. All she could do was watch it roll away. 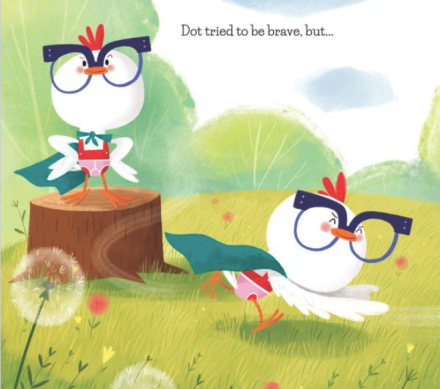 Or was there something else she could do? She plucked up her courage and ran after it. The egg was just within reach when it bounced away and took two hops across lily pads into the middle of the pond. Dot swung over the egg on a tall strand of grass and was just about to grab it when it was catapulted into a tall tree.

Dot climbed the tree and inched out onto a long branch. “She was this close when…” the branch broke and the egg broke away too—”into the deep…dark…woods.” She took one look and…decided “this was no time to be a little chicken.” She ran down the path in pursuit of her little brother or sister and finally caught that egg just as it began to crack. These days, while Dot is still afraid of many things, her little sister and the other chickens think she’s a hero—just “a big hero” who’s “just a little chicken.”

Tammi Sauer’s upbeat story of a timid chicken who overcomes her fears in order to save her sibling is suspenseful, fast-paced, and sprinkled with humor. The story will have even the most cautious little ones cheering Dot on her quest and finding their own brave along the way. Dot’s sense of responsibility sparks the action and serves as a second gentle lesson in this well-conceived story. The ending, which embraces Dot’s wary nature while also revealing her heroic accomplishment, is a welcome message for hesitant children who are courageous in their own way.

Dan Taylor’s sweet Dot, with her oversized glasses and bright red overalls, will charm children looking for a hero who’s just their size. As Dot sets in motion her unhatched sibling and the story while installing a huge security camera and monitor in the coop, kids will alternately gasp and giggle at the suspenseful and humorous details on each page. The other chickens are delightfully supportive of Dot, which lends a sense of inclusiveness as they all rush out to cheer her heroic catch. Dot scrambles over a green meadow, hangs perilously over a lily pad covered pond, scurries up a tall tree, and flaps her way through a dark forest populated with a wolf, bears, and—most frightening of all—three garden gnomes.

A story of finding one’s courage at eggs-actly the right moment, A Little Chicken would be a heartening addition to home, classroom, and public libraries.

Discover more about Tammi Sauer and her books on her website.

To learn more about Dan Taylor, his books, and his art, visit his website. 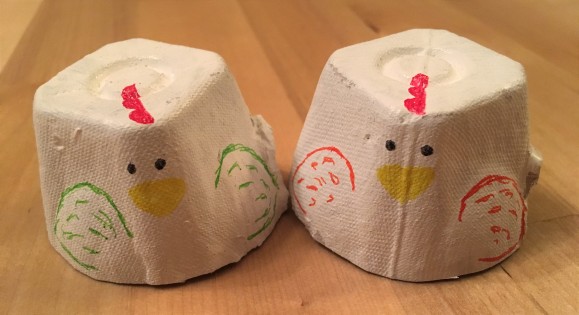 Egg Carton Chickens and a Basket Full of Games

With twelve little chickens you can come up with lots of games to play! This fun craft and game activity is eggs-actly what you need to start hatching some real fun! 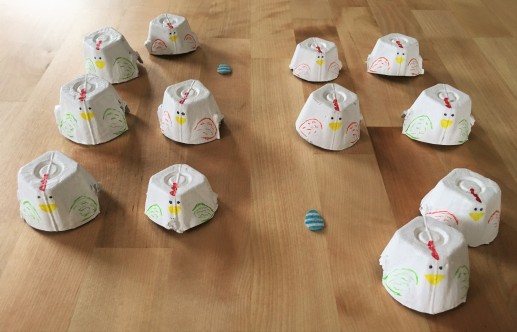 I’m sure you can also design your own games for your adorable chickens to play! With more chickens you can even make a checkers set or replicate another of your favorite board games!

You can find A Little Chicken at these booksellers

You can support your local independent bookstore, by ordering from