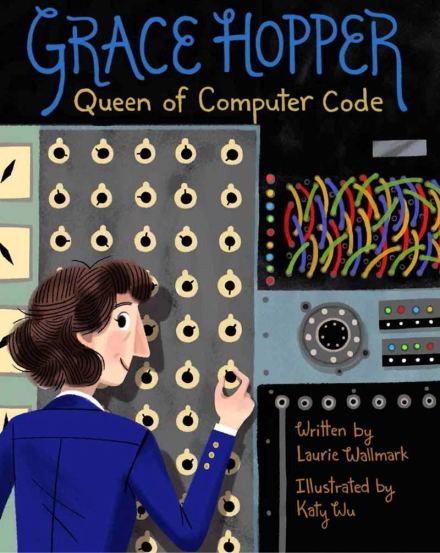 Established in 2012, today’s holiday raises awareness of the advances in educational technology for classrooms and teachers and to spread opportunities to schools and communities across the country for all youth to use. Digital Learning Day also highlights innovative educators who are using technology to enhance their lessons and bring the latest information and learning tools to students from kindergarten through high school. For more information on today’s holiday and to find resources for using technology in the classroom visit the Digital Learning Day website.

As Grace Hopper finished writing a computer code to guide Navy missiles, she noticed that there was a certain string of code that she had repeated many times. “Grace snorted. What a colossal waste of time! There had to be a better way. Why not make the computer do the work?” Grace figured out a way for the computer to store pieces of a program and then find them again to create another program. Grace was the first computer programmer to do this.

Even as a child Grace loved to tinker with mechanical things. She once opened all the clocks in the house to figure out how they worked. What did her mother say when she saw that? “…all she could do was laugh. After all, Grace was just being Grace.” Later, she built an electric elevator for her dollhouse. She reveled in difficult problems, and while the girls in her class “wore frilly dresses and learned to be young ladies, Grace studies math and science.”

Studying hard, Grace finished high school two years early, and while she had the grades in math and science to go to college, she failed Latin. Without passing Latin, she couldn’t go to college. Grace buckled down and the next year she was off to Vassar College. Grace passed up taking classes such as “Husbands and Wives” and “Motherhood” to take math and physics. But Grace did a lot more than just study. “Her personal motto was ‘Dare and Do,’ and she took it to heart. She flew in a barnstormer airplane. 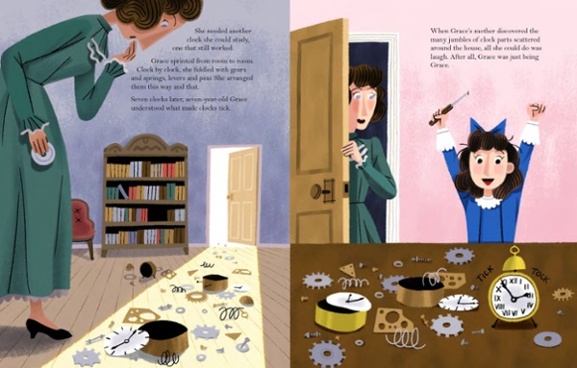 Grace went on to graduate school at Yale and then took a job teaching at Vassar. She knew how to make her classes fun and informative. At this time America was at war and needed mathematicians. She tried to join the Navy, but they told her she was too old and too thin. She kept asking, however, and after a year, the Navy agreed to let her join. She “was assigned to write programs for one of the first computers ever built, the Mark I. Only a few people had ever programmed before, so she had to learn how to do it on her own.”

Then one day Grace learned that “the new computer, the Mark II, had stopped working.” Grace and her coworkers searched and searched for an error in the code, but they found none. Then Grace thought that maybe the problem wasn’t in the code but in the computer itself. They looked inside the huge machine for loose wires or electrical shorts. Nothing. Then they saw it—a moth had gotten inside and was blocking a switch.

With a tweezer, a worker removed the moth and the computer started up again. Grace taped the moth into the log book and wrote, “‘First actual case of [a computer] bug being found,’” and the term “computer bug” was born. Grace also revolutionized programming when she “invented a program that let people use words to tell the computer what to do” instead of pages and pages of 1s and 0s.

When Grace turned sixty, the Navy made her retire. Within six months, they asked her to return and she worked for them for another twenty years. She retired again at the age of eighty as the Queen of Computer Code. As many people called her, she really was “Amazing Grace.”

A timeline of Grace Hopper’s life as well as a list of honors awarded her and resources for further reading about Grace and other women in STEM.

Laurie Wallmark’s engaging biography of Grace Hopper will delight kids as they see her grow from a precocious and innovative child to a woman who used her intelligence and imagination to lead the computer revolution. Specific examples of Grace’s successes and the support she received at home will encourage other engineering-minded kids, and the inclusion of her failure in Latin demonstrates that everyone has areas of weakness that can be overcome with hard work. Grace’s perseverance in getting the Navy to accept her is also a good lesson for children on not giving up on their dreams. The provenance of the term “computer bug” will surprise and amuse readers.

Katy Wu’s charming illustrations of events in Grace Hopper’s life take readers back to time when computers were new. Children will marvel over the size and design of early computers. Grace’s sense of adventure and humor are on display is colorful and action-packed images. Uplifting and encouraging sayings by Grace Hopper that will inspire children are sprinkled throughout the pages.

A book to motivate children to reach for their dreams and spark pride in individual accomplishment, Grace Hopper: Queen of Computer Code would be an influential book to add to home, school, and public libraries.

Discover more about Laurie Wallmark and her books on her website.

To learn more about Katy Wu, her books, and her art on Tumblr.

Digital communication has a language all its own! Open this laptop and find the twenty-two Internet-based words in this printable word search puzzle. 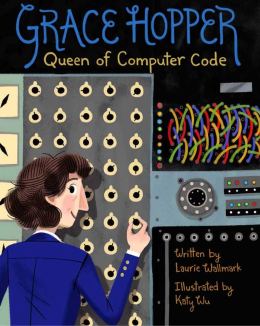 You can find Grace Hopper: Queen of Computer Code at these booksellers