This month-long holiday celebrates one of the world’s favorite foods. With over 600 different shapes and sizes, pasta offers a wealth of recipe choices, from fancy to plain to that can’t-live-without Mac n’ Cheese. Pasta—the Italian word for dough—has been part of people’s diets since ancient times and was introduced to America by Thomas Jefferson in 1789, when he brought the first pasta machine and a supply of macaroni back home from a trip to France. There’s only one way to enjoy this special culinary event—so get the pot boiling or head out to your fav Italian restaurant and eat up!

The pasta was fresh. Oh! I don’t mean that way—I’m just sayin’ they were new to the world. They? Well, yeah—you’ll see. The pasta was…recently made at the factory, and they knew their place. Each type “stuck to their own kind” in their own boxes, and they never talked to one another or the people who worked the machines or the lines. “They didn’t mix, move, or mingle. They were very good noodles.”

They went from shelf to shipping carton thinking of the super places they would end up. For instance, the wagon wheel imagined a home on the range with some cool boots, a ten-gallon hat, and a horse. But one day a piece of fettuccine overheard two workers talking about lunch. One was going to have pasta salad and one had brought leftover Pho.

Fettucine immediately called a meeting and expressed his fears (“Aaaaah! They’re going to EAT us!”), but the rest of the pasta thought this scenario was ridiculous. “‘Why would the humans make us, only to get rid of us?’” reasoned Bow Tie. Raman was getting tied up in knots, while Mac was trying to cool things down.

The Rotini gang believed Fettucine, though, and pointed everyone’s gaze in the direction of the directions on their boxes. All the pasta were aghast. Fettucine began crying, “‘Just cover me in Alfredo sauce now.’” While Ramen snarked, “‘You mean Afraid-o sauce.” Bow Tie tried the civilized approach to calm the situation, and chill Mac brought a more laid-back vibe to the scene.

They needed a plan. Fettucine suggested hiding; Bow Tie voted for a peaceful sit-in; and Ramen wanted a more forceful opposition. But Mac reminded them to meditate on that “super place we’ve been hearing and dreaming about.’” Rotini was all for action, and in a moment had drawn up a schematic that might work if they sacrificed the Ravioli. This idea did not sit well with the Ravioli or the Tortellini. Emotions began to boil over, and a fight broke out on the factory floor. 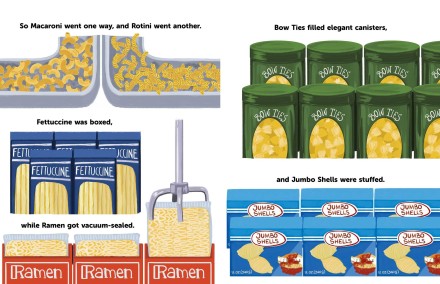 All seemed lost until…an angel appeared with an ingenious proposal. Everyone stopped wrestling to watch the presentation she’d “cooked up.” It looked good. Spaghetti wrote some signs, and the rest of the pasta hung them in plain sight. The sign on the door announced that the factory was closed. The pasta machines were all “out of order,” and the cartons were all labeled to be shipped to “Super Awesome Island, Paradise.” Then the fettucine, the bow ties, the ramen, the spaghetti, the rotini, the ravioli, and all the rest went back to their own boxes and waited…until they found themselves “on vacation in a very super place.”

Miranda Paul dishes up a funny, dough-lightful story that will keep readers laughing while they noodle on the ideas of teamwork and friendship. Paul sprinkles plenty of puns throughout the pages while also stirring in more subtle humor based on each type of pasta’s shape or use in common recipes. The elbow macaroni is hip and calm befitting its use in Chili Mac, the bow tie is formal and mannerly, and it should come as no surprise that the rotini, with his spiral body, should come up with the most convoluted plan. When Angel Hair appears and unites the pasta in a successful bid to replace one “super” place with another, readers will see that by mixing it up and working together they can accomplish super things.

In his bold, colorful illustrations, Javier Joaquin provides each type of pasta with a distinct and expressive personality that readers will respond to. As the boxes of pasta sit on the factory shelf, waiting to be loaded into cartons, observant kids will see the heroes of the story hanging out in their respective packages. The vibrant dreams of each pasta stand in stark contrast to the sterile factory environment, spurring readers to cheer when their clever plan to escape comes true.

Discover more about Miranda Paul and her books on her website.

View a portfolio of illustration and graphic design work by Javier Joaquin on his website.

Noodle On This! Puzzle

Four pasta dishes are on the stove. Can you find which type of pasta goes to each container in this printable Noodle On This! Puzzle?

You can find The Great Pasta Escape at these booksellers