Cat lovers get it! The mercurial personalities of felines keep us laughing, shaking our heads, and, of course, loving these singular pets. Cats are the stars of social media, they inspire fashion statements, decorate mugs and dish ware, and are cuter than cute. But there are many cats and kittens that don’t have a forever home. National Cat Day was established in 2005 by pet and family lifestyle expert and animal welfare advocate, Colleen Paige. Her goal was to raise awareness of the number of rescue cats that need permanent homes while also celebrating the unique relationship between cats and those who love them. Today’s book is simply purr-fect for those who love cats and books!

Written by P. I. Maltbie | Illustrated by Daniel Miyares

On a particular November day in 1904, a crowd gathered outside the brownstone where Samuel Clemens, known to readers as Mark Twain, had recently come to live. Reporters, readers, and neighbors had come to wish Sam a happy birthday. But they were shooed away by his housekeeper, Katy. Since his wife, Livy, had died five months earlier, Samuel had not felt happy; he didn’t want to see anyone or even leave the house.

“From an upstairs window an old man with wild white hair and a black cat watched the crowd walk away. ‘Everyone wants to meet witty Mark Twain,’ the man said. ‘But tell me, Bambino, would they want to meet sad, old Samuel Clemens?’” Soon his daughter Jean entered the room and persuaded her father to come downstairs for cake and ice cream with the promise that Bambino, their black cat, could have some too.

In the middle of the cake stood a single candle—a tradition that Livy had started so that Samuel would “‘never grow old.’” With a dish of ice-cream to himself, Bambino took the place of Sam’s older daughter, Clara, who couldn’t be with them that night. Friends had invited Sam for dinner, but he did not want to go. As winter settle in, so did Samuel. He rarely left his bed, littering the covers with papers and books—so many “that the cat had difficulty finding a soft place to sleep.”

As Christmas approached, instead of attending the parties he was invited to, Samuel wandered around his big house, gazing at pictures of Livy and playing games—like billiards—with Bambino. When spring arrived, Katy rushed around opening windows to air out the house. In a sunlit upstairs room, “Bambino attacked the sunbeam dancing on the wardrobe door. Sam opened the door. The sunbeam shone on a white suit. Bambino swatted at it.” Sam lifted the suit from the closet and looked at it fondly. While Livy was alive he had worn that suit every summer. “‘Those were happy days,’” he recalled.

Just then, outside the open window, Bambino saw a squirrel that had been chattering at him for days. With a leap Bambino was chasing the squirrel down the street. “‘Bamb-i-i-i-n-o-o-o!’ Sam’s voice echoed over the city noises.” Sam and Jean put up Lost Cat posters offering a $5.00 reward (a week’s wages) for Bambino’s return. Sam didn’t know how he would tell Clara that Bambino was gone, but Jean reassured him that someone would find their cat.

“Soon a steady stream of people appeared on Sam’s doorstep with cats and kittens of every size, color, and breed.” Seeing the crowd, Sam came out onto his stoop. One little girl offered to let Sam borrow their family’s cat until Bambino returned, and others brought him cats they thought would comfort him. But Sam thought Bambino would not “‘take kindly to finding a foreign cat in his kingdom.’” Reporters wanted to talk to this beloved author about Bambino too, “and this time Sam talked to them.”

Four days later, Katy found Bambino on the doorstep as if nothing had happened. Sam was overjoyed. “‘To celebrate, we’ll feast on the fatted salmon,’” he said. Sam’s experience with his kindly friends, neighbors, and readers had given him a new perspective. He was ready to rejoin the world and enjoy what it had to offer. An announcement in the newspaper let people know that Bambino had returned, but they continued to drop by to wish Sam well. Now, Sam smiled and talked with them.

Sam had several white suits made, and they became his trademark. At his home in Connecticut, he held a musical gala and talked and joked the way he used to. Jean and Clara had not seen their father this happy in a long time. And Bambino? He just “blinked his eyes and purred.” 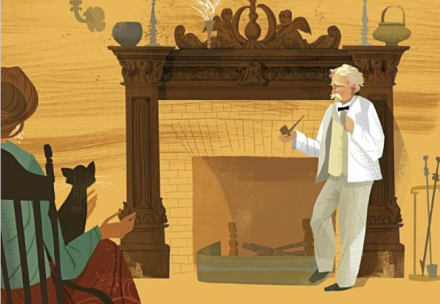 P.I. Maltbie’s focus on a particular year in Samuel Clemens’ life provides a deeper portrait of this author known for his wit, wisdom, and social commentary. Maltbie’s detailed and compassionate storytelling reveals the stages and effects of grief and the way a pet or a good friend can help in a way that is accessible and understandable for children. His tracing of the passage of time from fall to summer allows readers to see that recovery from sadness or other events is a personal journey, but one that is made easier with the enduring love and reassurance of family and friends. Readers who love the stories and novels of Mark Twain will appreciate this touching glimpse into Samuel Clemens’ life. 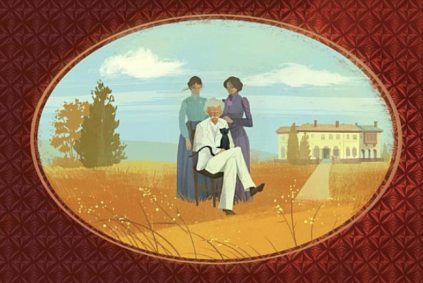 Daniel Miyares’ crisp, mixed-media and digital illustrations resonate with muted, yet saturated colors that reflect Samuel Clemens’ mourning. Perky Bambino is a constant presence, celebrating Sam’s birthday, playing billiards with Sam, and curled up on Sam’s bed. Bambino’s dramatic leap out the window will wow kids, and they will empathize with Sam as pages without the black cat reflect Sam’s feeling of loss. Young readers will be inspired by the little girl who offers her own family cat to comfort Sam and be cheered to see the positive effect Bambino’s return has on Sam as he again embraces the world dressed in the iconic white suit, which signals Sam’s lightening mood and regained good humor.

Bambino and Mr. Twain is an excellent biography to share with children at home and school to show that everyone undergoes good and bad times, but with faithful and loving family and friends, problems can be resolved and happiness restored.

To learn more about Daniel Miyares, his books, and his art on his website One little kitten wants to play with her friends. Help her find her way in this printable maze!

You can find Bambino and Mr. Twain at these booksellers