Computer Science Education Week was launched in 2009 to raise awareness of the importance of computer coding in all careers and to invite people to learn how to code. Students from kindergarten to grade 12 are especially encouraged to take an interest in computer science and learn coding skills and also to take part in Hour of Code programs at school and elsewhere. The holiday is celebrated in December to honor computing pioneer Admiral Grace Murray Hopper, who was born December 9, 1906 and went on to become a United States Navy rear admiral. Her work with machine-independent programming languages led to the development of COBOL, and she was instrumental in many other early computer-related advancements. To celebrate this week, check out Hour of Code and try coding for yourself!

Margaret and the Moon: How Margaret Hamilton Saved the First Lunar Landing

“Margaret Hamilton loved to solve problems.” When she looked around, she saw many things that made her wonder “why?” Instead of going with the status quo, though, she came up with her own answers. Some things she questioned were why girls didn’t play baseball and why there were so few women doctors, scientists, judges and other professionals. So Margaret joined the baseball team and studied “hard in every subject at school—reading, music, art, and especially mathematics.”

From her father who was a poet and philosopher, Margaret learned about the universe. She wanted to know “how the planets moved, when the galaxies formed, and why the stars shone.” She loved to gaze “at the night sky in wonder.” She especially wanted to know more about the moon—how far away is it? How many miles is its orbit around the Earth? What is its diameter? 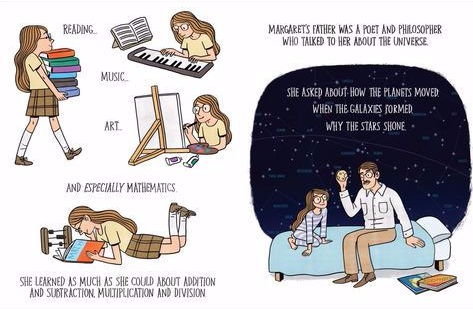 In school, Margaret found it fun to solve “harder and harder math problems” in algebra, geometry, and calculus. “And then she discovered computers!” She realized that she could use computers to solve so many of her questions about the universe. She began writing code and called herself a software engineer. After starting with simple mathematical problems, Margaret moved on to writing code that “could track airplanes through the clouds,” predict the weather, and perform functions they never had before.

In 1964 she joined the team at NASA that was working on sending astronauts to the moon. In writing her code, “Margaret thought of everything that could happen on a trip to the moon.” What if the spacecraft went off course or lost power? What if one of the astronauts made a mistake? Margaret wrote code that could solve all of these problems and more. Soon Margaret was leading a team of her own as “Director of Software Programming for NASA’s Project Apollo.”

She was instrumental in helping Apollo 8 orbit the moon, Apollo 9 hook up with another ship in space, and Apollo 10 come “within nine miles of the moon’s surface.” When NASA was ready to land people on the moon, Margaret wrote the code. She thought of every problem that could arise and included a solution. The printout of her code stood taller than she was.

On the day of Apollo 11’s launch, Margaret was in the control room while the world watched on television. It took four days for the spacecraft to reach the moon. Finally, the lunar module, Eagle, separated and was ready to make the landing. But just as it was about to descend, an astronaut flipped a switch that sent the Eagle’s computer into overload.

Had Margaret “prepared for this problem? Of course! Margaret’s code made the computer ignore the extra tasks and focus on the landing.” Slowly the Eagle approached the surface of the moon and touched down. “The Eagle has landed!” Neil Armstrong announced to an amazed audience. In NASA’s control room, everyone cheered. “Margaret was a hero!”

An Author’s Note with more information about and photographs of Margaret Hamilton follow the text.

With excellent examples from Margaret Hamilton’s childhood and adult life, Dean Robbins presents an accessible and compelling biography that reveals, from the beginning, Margaret’s curiosity, confidence, and convictions. Robbin’s focus on Margaret’s hard work, her excitement at discovering computers, and her leadership at NASA creates a narrative that is inspirational for all children. His emphasis on positive, affirming events in Margaret’s life is welcome, allowing girls and boys to realize that through dedication and self-assurance, they can achieve their goals just as Margaret—a superb role model—did.

Lucy Knisley’s bright, supportive illustrations, full of thought bubbles of Margaret’s ideas and wonderings, give readers the kinds of details that will spark their imaginations and help them understand and appreciate Margaret Hamilton’s many gifts and expertise. Images of mathematical problems give way to lines of code, helping children see the connection between what they’re learning at school and future careers. Kids interested in space exploration will be enthralled with the illustrations of the NASA control room and lunar launches.

For kids interested in computer science and other sciences, biographies, and history, Margaret and the Moon is an excellent addition to home as well as classroom and school libraries.

Discover more about Dean Robbins and his books on his website.

To learn more about Lucy Knisley, her artwork, books, and comic, visit her website.

Learning to code is awesome! Why not try an Hour of Code here and then color this printable I Love Computers! Coloring Page!