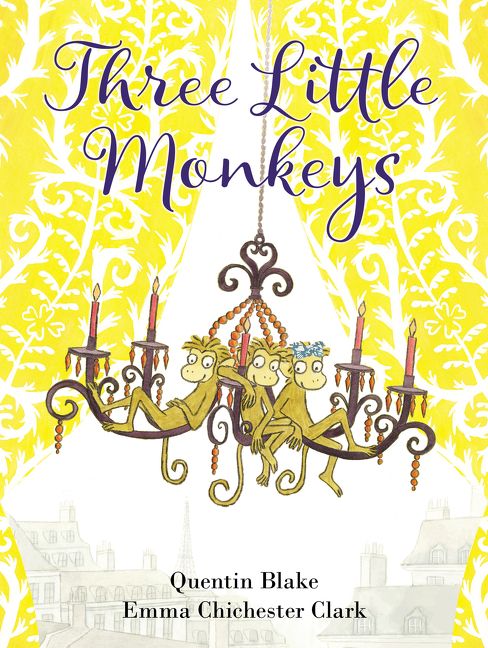 Today’s holiday actually got started with some monkeying around by art students at Michigan State University when Casey Sorrow wrote “Monkey Day” on this date on his roommate’s calendar. The idea sparked a real celebration with other art students and later became popularized through a comic strip that Sorrow and a friend published. Since then Monkey Day has become an international opportunity to raise awareness of primates and the dangers facing them. To celebrate today’s holiday, learn more about these mischievous animals, visit a zoo, or have a little fun in honor of these favorite animals!

Whenever Hilda Snibbs came home, the first thing she did was call out “‘I’m home! Where are you?’” You  might think she was talking to her kids, her dog, or her cat, but she was actually addressing her three little monkeys whose “names were Tim and Sam and Lulu.” Hilda was sure to give them healthy snacks because “they were very lively.” 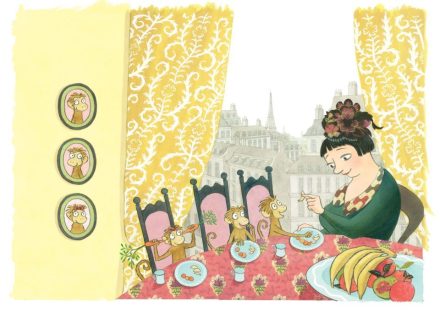 One day when Hilda went to the grocery store, the monkeys grew bored. They opened the hall closet and “threw everything into the hall.” They opened the umbrellas, tore the laces from all the shoes, and plucked all the feathers from Hilda’s favorite hat. When Hilda came home and saw the mess she had one thing to say: “‘I’m really very disappointed in such naughty little monkeys.” Tim, Sam, and Lulu just gazed at her silently. 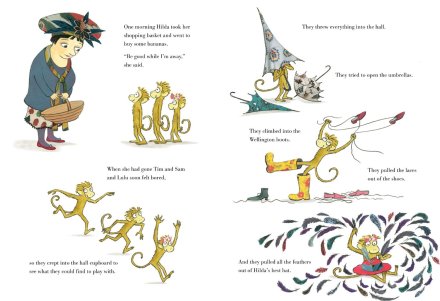 The next day Hilda went to the hat store. Before she left she told her little monkeys to be good. But as soon as she was out the door, they hurried to the living room to play. They upended the wastebasket, spilled the flower vase, tore the newspapers, and tangled Hilda’s knitting into knots. “When Hilda came home and went into the living room she found the most awful mess. There were flowers all over the place. And her poor knitting!” She admonished the little monkeys, but they just “looked at her with their big round eyes and said nothing.” 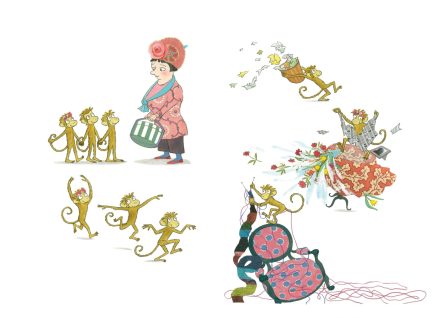 Needing more wool, Hilda headed into town the next day with a reminder to her monkeys to be good while she was away. But the kitchen was so enticing, and they tossed everything out of the cupboards, scattered the powdered soap, emptied the trashcan, and tipped the soup pan onto the floor. This time when Hilda got home, she became angry. “‘Great grief! How long can I put up with these terrible little monkeys?’” But Tim, Sam, and Lulu just smiled at her. 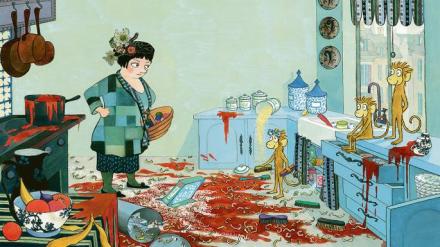 The next day was market day again and once again the monkeys grew bored as soon as Hilda was gone. The bathroom was a perfect playroom with its toilet paper to unroll, toothpaste tube to squeeze, and shampoo to splash around. Hilda nearly tore her hair out when she returned to this mayhem. As she stared at her monkeys wrapped in toilet paper and sporting sudsy costumes, she cried, “‘Oh, for a peaceful life without these wicked little monkeys!’” 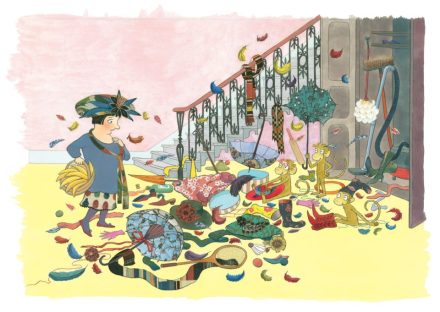 Before going out the next morning, Hilda gave Tim, Sam, and Lulu a stern talking to. It was late when she returned and as she stepped through the door something seemed amiss. The living room was in perfect order, the kitchen was spotless, and the bathroom shone. Hilda broke down in tears. Something horrible must have happened to her three little monkeys. Her handkerchief was soaked through, and when she went to the closet to get a new one, she found Tim, Sam, and Lulu waiting quietly for her.

Hilda hugged them all and “that night…went up the stairs to bed with a happy heart.” As she got under the covers, she found herself lying on all her forks, spoons, and cans of sardines. “But that is the kind of thing you have to expect if you have three little monkeys.” 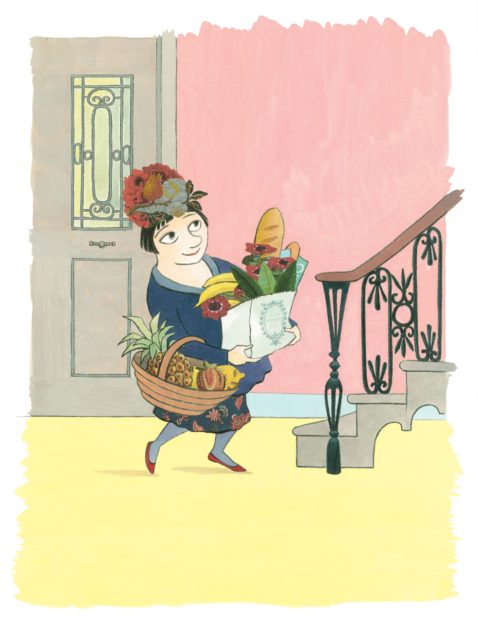 Quentin Blake’s hilarious tale of three little monkeys has all the charm and style of classic storytelling that will set young readers giggling and eagerly anticipating each of Hilda’s trips into town. Adults with “little monkeys” of their own will anticipate the tenderhearted ending, and children will be delighted with the assurance of enduring love Hilda’s tears provide. A dramatic reading of Hilda’s increasing frustration with her mischievous charges will enthrall listeners as they gaze at the reader with the same sweet expression as Tim, Sam, and Lulu. 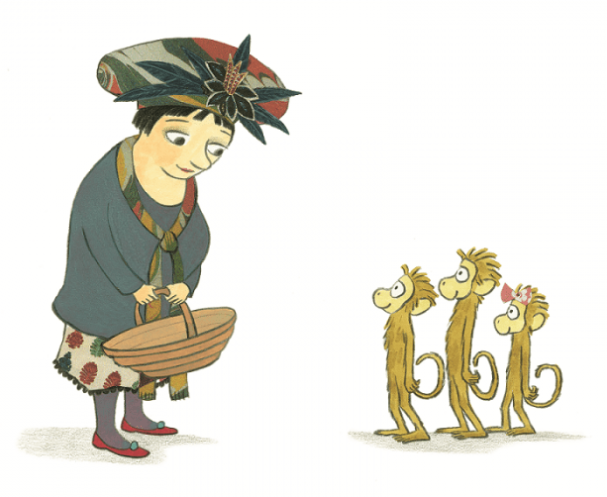 Emma Chichester Clark’s sophistcated illustrations begin on the endpapers, where Hilda is leaving her elegant brownstone under the watchful gaze of her little monkeys. Tim, Sam, and Lulu are as cute as can be as they happily eat their snack and give a hint of the shenanigans to come. With each new day, the monkeys get into more and more trouble, leading to wonderful, fully detailed two-page masterpieces of the mayhem they cause. Hilda’s growing consternation is clear in her facial expressions and gestures. Kids will love Hilda’s collection of hats and matching outfits and scenes of her home. When Hilda comes home to a pristine house, the brightly colored pages turn as gray as a cloudy day. The sunny hues return with the discovery of her precious little ones, and the bedtime surprise is a delight.

Discover more about Quentin Blake, his books, and his illustration work on his website

To learn more about Emma Chichester Clark, her books, and her paintings, visit her website. 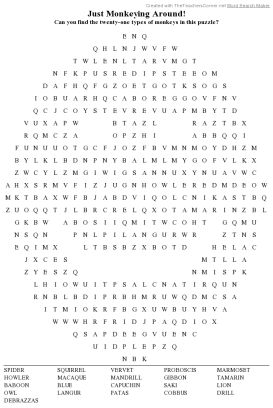 Monkeys are interesting and fun to watch! Can you find the names of twenty-one types of monkeys in this printable Just Monkeying Around! Word Search Puzzle? Here’s the Solution.