Bacon has been around since ancient times. In early French it was known as Bako, in German as Bakko, and in Teutonic as Backe. In Middle English it was called Bacoun, but all these words simply meant “back,” as in the back meat of pigs. Preserved and flavored, bacon is a favorite the world over and has seen an explosion of uses in the past few years, from enhancing cupcakes, apple pie, and chocolate chip cookies to spicing up peanut butter sandwiches, lasagna, and French toast. But there’s nothing quite as enticing as two or three crispy slices sitting on the edge of a plate of eggs or pancakes as part of an all-American breakfast!

From Egg to Waffle to Pancake, there was no one who didn’t love Bacon—even Bacon himself. Well…maybe French Toast was an exception, but he “doesn’t like anyone.” Bacon loved all the attention the other foods gave him. Jalapeño wanted to sit next to him, and Garlic thought he smelled so good! He made the fruit and vegetables laugh with his “charming stories and funny jokes,” and, boy, could he play the ukulele! 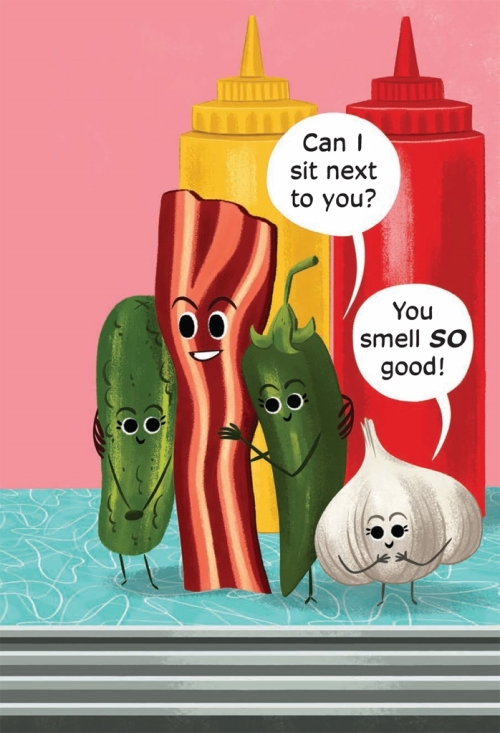 Ham, sausage link, and sausage patty were jealous, “but Bacon didn’t care about them. Not one bit.” After all, “He was becoming a real celebrity. His picture appeared on t-shirts. And billboards. And buses.” Bacon was so enthralled with himself that he began to forget his friends. Sometimes he even “pretended not to know some of his old friends.” Bacon had fans, and that was enough for him.

Bacon began to live the high life of sports cars, designer clothes, and the latest fads. He was even the star of the breakfast pastry parade. “Indeed Bacon was the toast of the town. Until….” Well…we did warn you that “everyone loves Bacon.”

Kelly Dipucchio’s witty cautionary tale about a piece of bacon that gets too big for his broiler sizzles with snappy sentences and the perils of celebrity. She chooses words and experiences that are recognizable to any child navigating the world of school, siblings, and friends, and with sly winks to popular culture shows that mistaking fans for friends ends badly and that there is always someone “bigger” than you.

Even if readers don’t like the taste of bacon, they won’t be able to resist Eric Wight’s adorable slice who becomes the star of a 1950s-era diner. From the first page where Bacon admires himself in the back of a spoon, kids will giggle as Bacon takes pictures with equally cute Hotdog, Chicken Leg, Pickle, Garlic, and Jalapeño, leads a citrus parade complete with paper cocktail umbrellas, and plays the ukulele for swooning tater tots, French fries, and curly fries. But as the other foods grow sad and disgruntled with Bacon’s attitude—even brandishing fancy toothpicks—kids will understand and empathize with these forgotten friends. When Bacon meets his fate on the last page, readers are sure to fork over a howl of surprise.

To learn more about Kelly Dipucchio and her books, visit her website!

There’s some tasty bacon sizzling in the center of this frying pan-shaped maze. Can you find your way through this printable Amazin’ Bacon Maze to eat it up? Here’s the Solution!