On the last Saturday in September, The ScareFest in Lexington, Kentucky kicks off a coast-to-coast simultaneous ghost hunt by teams investigating paranormal phenomenon in various venues. They collecting supporting evidence with EMF meters, digital thermometers, handheld and static digital video cameras, audio recorders and computers. The hunt ushers in a month of mysteries, haunted attractions, and other autumn festivals.

In a big round bowl in a certain boy’s room in a seaside town, “Goldfish Ghost was born.” For a while, Goldfish Ghost just hung out looking at the ceiling, but he got lonely, “so Goldfish Ghost floated out of the bowl and drifted toward the window to find some company.” He drifted over the compact little town nestled near the ocean and watched over by a lighthouse that “everyone said was haunted.”

At the pier seagulls screeched, waiting for a snack. They weren’t interested in talking to Goldfish Ghost, so he caught the breeze into town. The sidewalks and shops were busy with locals and tourists “buying sweaters and postcards and pets and groceries, but everybody there was with somebody else, so no one was looking for company.” Goldfish Ghost kept drifting and soon reached the beach. No one there noticed him either. 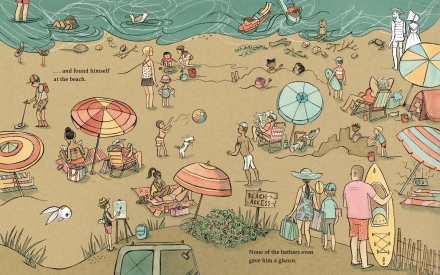 The swimmers and sunbathers also didn’t seem to notice the “ghosts of creatures who had lived in the sea” that were now floating in the air just above the surface of the ocean. Goldfish Ghost might have joined them, but he didn’t feel comfortable among these wild fish. “It can be hard to find the company you are looking for.” Goldfish Ghost stopped for a moment, perching on top of a beach umbrella as he pondered his next move. Finally, he returned home to his bowl.

When he got there, however, he found a new goldfish swimming happily in the bowl. While she seemed okay, Goldfish Ghost thought they wouldn’t have much in common, so he continued his search for the right companion. In the still night air, he heard a voice say, “‘I’ve been looking for company.’” Goldfish Ghost followed the sound to the lighthouse, where he found the ghost of the old keeper. She was also lonely and looking for someone to talk to.

She held Goldfish Ghost gently “and placed him where the light had once shone for sailors at sea.” Then in silent happiness, the two ghosts gazed out at the world together.

Lemony Snicket, most fortunately, interprets the world through a singular lens. In Goldfish Ghost he gives quirky, yet comforting, meaning to the sad reality of aquarium ownership while connecting Goldfish Ghost to the world’s natural lifecycle. Inherent in the story is also the idea of friendship and the idea that while some kids (and adults) may feel invisible to others at times, there is someone out there who will make a perfect companion, if you just keep looking.

Lisa Brown’s soft-hued, matte watercolor illustrations set a snug, soothing atmosphere as young readers follow Goldfish Ghost on his journey. From the little boy’s room and its seascape décor to the inviting lighthouse on the edge of the shore, Brown gives kids plenty to discover on every page. Alert readers will notice other ghosts on the pier and on the beach, see the little boy leaving the pet store holding a familiar plastic bag, and recognize the ghostly creatures floating above the ocean. When Goldfish Ghost finally finds a friend in the lighthouse keeper (whose reading runs to the same interests as the little boy’s), kids will be cheered to see that he gets new “life” in the golden glow of the Fresnel lens.

With a splash of humor and a lot of heart, Goldfish Ghost makes a tender choice for story times as well as for children who have lost a pet or are navigating the world of friendships.

You’ll discover the world of Lisa Brown, her books, comics, and illustrations, on her website!

If all ghosts were this adorable, who would be afraid of them? Color this printable Cute Ghost Coloring Page then let it hang around your room.