Today’s picture books are amazing! Offering glimpses into history, revelations in science, introductions to incredible people, fabulous reasons to laugh out loud, poignant moments for reflection, and much of the best art currently being produced anywhere, picture books defy their slim appearance with content that inspires and changes young lives. Reading a wide variety of books to children from birth on up is one of the most rewarding activities you can do. Make choosing the books to read a family affair! Kids love picking out their own books and sharing cozy and fun story times with you!

As a young girl living on a farm in Alabama, Georgia Freeman learned from her mother a lesson she took to heart: “Think twice before doing anything you might regret, and never, ever hate anyone.” When Georgia grew up and had children of her own, she was known for her delicious cooking. She even worked as a cook at the National Lunch Company, a restaurant in Montgomery, Alabama. At the time, segregation laws dictated that white customers sit on one side of the counter and black customers on the other.

On December 1, 1955, Georgia heard a radio report that “an African American woman named Rosa Parks had been arrested for refusing to give up her seat on a bus to a white passenger.” The next day, the Black community in Montgomery was asked to boycott the buses in support of Rosa Parks and because of the poor treatment African Americans were forced to endure by the bus drivers. Georgia wanted to do even more to support the movement.

Soon after the boycott began, Georgia went to hear Dr. Martin Luther King Jr. speak at the Holt Street Baptist Church. “He talked about freedom. Unity. Equality.” And Justice. “Those were things Georgia believed in, and she was willing to fight for them.” Georgia decided to use her talent for cooking to help. She and a group of women got together and cooked. They made sandwiches and dinners and sold them at the boycott meetings and in their neighborhood, including to those walking to and from work instead of taking the bus. 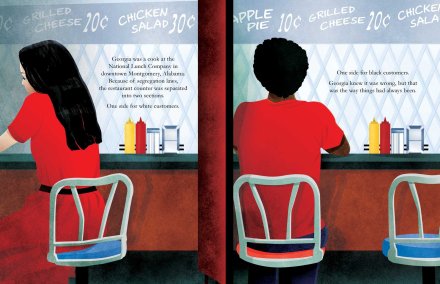 The money that Georgia made went to the “Montgomery Improvement Association, which helped fund the boycott.” This work by Georgia and the other women was dangerous. If anyone learned that they were involved in the boycott, they would lose their jobs, so all cooking and selling was done in secret. Georgia’s customers at local shops and businesses paid for her scrumptious pies in cash so that only Georgia knew who they were. Over time, Georgia’s group donated enough money  to pay for “gas for the carpool system that had been set up for the boycott” and even to buy station wagons to transport people around town. Whenever Georgia was asked where she got this money, she answered, “‘it came from nowhere.’”

The bus system was losing money because of the boycott, “so the city did what it could to stop the protesters and their efforts.” Ninety people, including Dr. King, were arrested. Georgia was called to testify in court. She told of her experience in which after paying her fare, she was told to get off the bus and go to the back door to get on. Before she could reenter the bus, the driver shut the door on her and drove off. After that, she said, she no longer rode the bus.

Georgia knew supporting the boycott was the right thing to do, but when the National Lunch Company found out, they fired her. With six children to raise on her own, Georgia worried about what she would do. Dr. King encouraged her to open her own business. He helped her improve her kitchen, and soon Georgia’s house had long lines of people waiting to eat her meals and more waiting for deliveries. Georgia made hundreds of lunches every day. While she was feeding her community, Georgia “was also bringing the people of Montgomery together—black and white.” Georgia’s house was also used for secret meetings among civil rights leaders.

On November 13, 1956—nearly a year after the boycott had begun, Georgia heard another radio report saying that the United States “Supreme Court had declared that segregation on buses was illegal! The boycotters had won.” This meant that people could sit anywhere they wanted. The Montgomery Bus Boycott was just a beginning. “There would be more battles to fight . . . so Georgia Gilmore kept right on cooking.”

An Author’s Note revealing more about the Montgomery Bus Boycott and Georgia Gilmore follows the text. Kids are also invited to make Georgia’s Homemade Pound Cake using the recipe on the back cover.

Dee Romito’s inspiring biography delves into the crucial role individuals can make in supporting people and causes they believe in. By focusing on unsung historical hero Georgia Gilmore and using her own words and thoughts, Romito reveals how those with strong beliefs can use their talents and courage to fight for change behind the scenes and still make an important difference. Her conversational storytelling brings a personal touch to this biography, drawing young readers in to learn the details of this early battle in the Civil Rights movement—also begun by an act of a solitary person. Bookended by the radio reports that Georgia hears, the story is well-paced to show how Georgia’s contribution grows over nearly a year. This timely biography is made even more resonant perhaps in that Georgia’s cooking and selling of meals and baked goods is an activity that many children will recognized from their own involvement in bake sales and other food-related fund raisers. The open ending invites readers to learn more about the Civil Rights movement and Georgia Gilmore.

Laura Freeman’s boldly colored, realistic artwork allows children to embrace the historical context of Romito’s biography through her expressive portraiture that introduces Georgia Gilmore, Rosa Parks, Dr. Martin Luther King Jr., and the members of Georgia’s Nowhere Club. A double-spread of the National Lunch Company’s segregated counter is visually striking as the divide comes at the book’s gutter, creating the side for white customers on the left and the side for black customers on the right. The injustice of this separation is expressed in the similar red clothing and dark hair of the woman on the right and the man on the left. Illustrations of crowds walking as buses go empty, attending the boycott strategy meetings, secretly buying pies, and filling Georgia’s home place readers at these scenes of the resistance movement. Freeman uses action, media coverage, and Georgia’s courtroom appearance to great effect. Knowledgeable readers will understand that making a positive difference continues across all generations.

Pies from Nowhere is a stunning book of empowerment for children and adults. The theme of using ones talents to make a difference is a timely lesson that kids will respond to. The book belongs in all classroom, school, and public libraries and is a top choice for home bookshelves as well.

Discover more about Dee Romito and her books on her website.

To learn more about Laura Freeman, her books, and her art, visit her website. 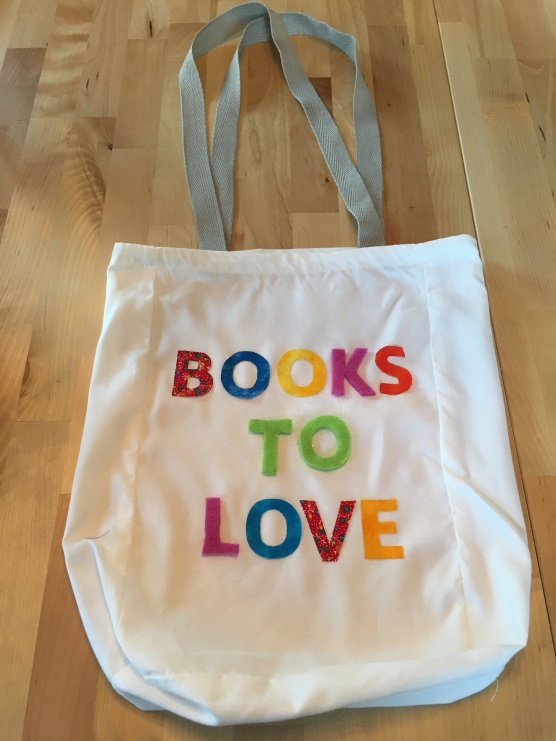 True book lovers can’t go anywhere without a book (or two or three) to read along the way. As Picture Book Month begins, make this easy craft to turn a cloth bag into a kid-size book bag!

You can find Pies from Nowhere: How Georgia Gilmore Sustained the Montgomery Bus Boycott at these booksellers