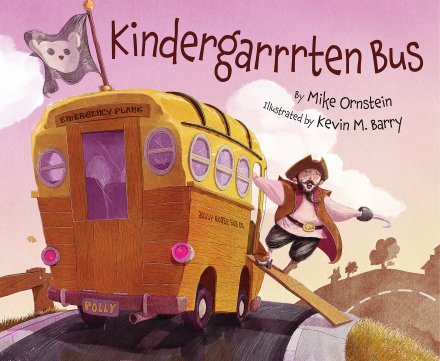 Ahoy mateys! Welcome to what may arrrguably be the most fun holiday of the year. You might think that this most treasured of days got its start shipboard on the bounding main, but it actually began in the walled confines of a racquetball court, where a group of guys were doing…well what a group of guys do to encourage each other—toss around pirate phrases. They decided the idea was too good to keep on the court, so they designated September 19th as Talk Like a Pirate Day. They then alerted humorist Dave Barry, who spread word of this day far and wide. Now it’s a favorite of young and old alike. So get out there and do some talkin’ ye scalliwags!

As the little tykes climb the plank into the kindergarten school bus, they’re met by a most unusual driver. He has a hook hand, a peg leg, a curly beard, a broad-brimmed hat with a parrot perched on the edge, and he greets the first little boy like this: “Ahoy, boy! What? It be ye first day of kindergarrrten? Well, don’t worry, laddie—it be me first day as a bus driverrr!” The pirate shows the kids to their seats and lays down the rules. Any infractions…. Well, Polly will tell ya: “Raaaaa, mutiny!”

The kids don’t seem too sure of this turn of events. They miss their family, their pets, their toys, and it’s all a little scary. But the pirate will have no “blubberin’ on me bus” because pirates are “rrrough” and tough. “And we ain’t got time for that fluffy stuff!” So the bus takes off, and the driver sings a little ditty as they go.

But the route turns as bumpy as a churning sea with potholes that rattle Polly so much that she flies out the window…I mean “winderrr.” The pirate calls after his parrot, “Waaaa arrrgh waaaa arrrgh!” Then the bus comes to a screeching halt amid a pirate melt-down. “I can’t drive me bus without me sweet snuggly Polly! I can’t do it, I tells ya! I can’t! I can’t I can’t!”

Everyone piles out, and the kids try to reassure the poor driver—and they kind of remind him of all the things he told them. Turns out that ol’ pirate “was only hornswogglin’” and that he considers himself “nothin’ but a scared, blubberin’ boob of a buccaneer.” The kids are empathetic and reassuring, and pretty soon the pirate is feeling better about things.

Back on the bus, the little ditty now has more than a note of encouragement to it. As they pull up at the X where “the treasure of all treasures” awaits the kids, the pirate gives one more lesson before letting all those little “scoundrels walk the plank—errr, I mean, exit the bus.” But why? one little boy wants to know. Why is a pirate driving a school bus? Well, that be somethin’ ye just have to see for yourself!

An afterword from the author discussing tips for talking with kids about fears and worries follows the story.

Could Mike Ornstein actually be a pirate? I’m thinking yes! His ease with Pirate-ese makes this dialogue-rich story a comical treasure that will have kids “Harrr, harrr, harrr-ing” at every twist and turn in the book—and lucky for them, there’s a whole loot of those. Scrumptious words like “blubberin’, hornswogglin’, landlubbers,” and “blue-footed booby bird” as well as a liberal sprinkling of rrrrs make this book a joyful read- aloud that kids will clamor to participate in. Nuggets of reassurance about “rrrespect,” admitting fears and worries, and enjoying school are pure gold.

Kevin M. Barry’s wide-eyed, rakish kids and scallywag of a bus driver are the perfect companions on this hilarious journey to the first day of kindergarten. The school bus—a wooden jalopy with porthole windows, a ship’s wheel steering wheel, and a teddy bear jolly roger—comes to a tipping point when the pirate’s beloved Polly flies the coop. As the pirate dramatically looks to the skies and admits his false bravado, the kids—skeptical, astonished, and empathetic—look on. While one curly-haired little girl reassures the pirate, the other kids channel their own bravery and get ready to have a fun day at school. Readers will love the expressive faces, small details (a fish-skeleton belt buckle, a girl’s “I Got This” t-shirt), and, of course, ruffled Polly.

Kindergarrrten Bus is a rip-roarin’ yarn with a heart of gold that will get kids and grown-ups laughing and talking about feelings, fears, and the fact that everyone gets scared sometimes. A go-to book for fun story times and moments when a little more encouragement is needed, Kindergarrrten Bus would be a favorite on home and classroom bookshelves.

To learn more about Kevin M. Barry, his books, and his art on his website. 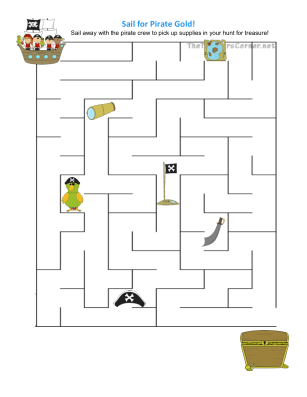 Join the crew of scallywags to pick up supplies on your way to finding a treasure chest full of gold in this printable maze.

You can find Kindergarrrten Bus at these booksellers