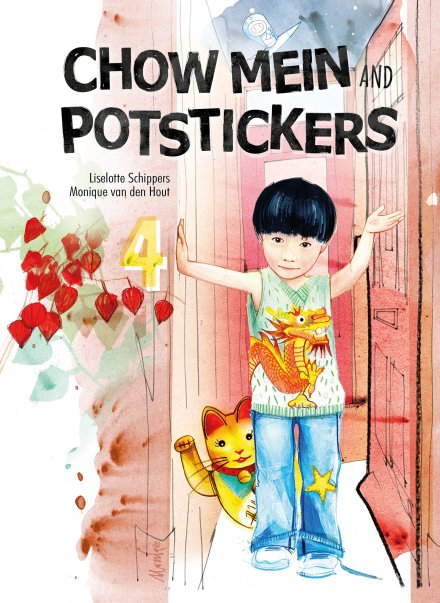 During the month of February, family and friends are encouraged to get together and have fun baking. Making sweet treats and savory dishes that come out hot and delicious from the oven is a wonderful way to spend time together, try new recipes, and learn new skills. This month is also a great time to explore foods and cuisine from other countries!

A little boy named Chan has just moved here from China and is hoping to make new friends. He tells a little about himself: “I moved to this country with my father, / my mother and my sister. / My mother is starting a new job here. / She’s an astronaut and someday she’ll go to the moon!” He reveals that his favorite food is potstickers and chow mein. He’s just about to go door-to-door to meet his neighbors. He wonders if kids here like to play and how “things work around here.”

Next door at Number 6, Chan meets Mila, who is from Bosnia. Chan thinks “she looks like a princess from a country far away.” Chan and Mila play soccer until they “get tired and hungry!” Then they eat Mila’s “favorite dish / Bosnian ćevapĉići—rolls of ground / meat.” At the end of the day, they say goodbye: “‘Zàijiàn!’” and “‘Doviđenja!’”

The next day Chan meets Rani, who was born in Indonesia. Even though Rani is younger, Chan says that “you can tell he is very wise. / Rani’s father is a famous musician. / He has to travel a lot, touring with his band. / His mother works at the hospital and helps people who are sick.” Rani shows Chan how to play marbles. Afterward, they enjoy Rani’s “favorite foods: satay and kroepoek. / That’s meat on a stick and shrimp crackers.” Later, they wave good-bye and say: “‘Zàijiàn!’” and “‘Sampai jumpa!’”

Across the street lives a little girl named Jamila, who is originally from Afghanistan. “‘Salaam!’” she greets Chan. Jamila plays the guitar, and the two sing and dance along. Chan says: “After a while we get tired and hungry. / Jamila and I eat Afghan qabuli—rice and lamb. / That brings us to the end of our day. / As we wave good-bye, we say: “‘Zàijiàn!’” and “‘Khodahafez!’”

Twins Kim and Coen live at Number 10. They are from Belgium. “Their father is a master chocolatier. That means he / makes fancy chocolates. When he is working, the house / smells wonderful. / Their mother sells the chocolates in a  / special shop. We get to try some. I’ve never tasted / anything so delicious!” After roller skating, they eat frietjes, which are like French fries served with mayonnaise. “‘Zàijiàn!’” and “‘Tot ziens!’”

In the tall yellow house next to the church on Chan’s street, Chan meets Basu, who came here from South Africa. His mother is a minister and his father is a fireman. Chan thinks that maybe he’d like to be a fireman too when he grows up. “Basu loves to paint and draw.” He and Chan “get busy with brushes, paints and pens.” When their “masterpiece is finished,” Chan says, “We have paint splatters on our clothes and in our hair!” All that creating has made them “tired and hungry.” They “eat South African bobotie… / a dish made with seasoned ground meat.” Before Chan goes home, the boys say:  “‘Zàijiàn!’” and “‘Totsiens!’”

Chan is excited to discover that his street is full of other children to play with. In other homes live Ania from Poland, Nuray from Turkey, Clifton from Suriname, Gracy from England, and Nino from Italy. On one special day, Chan invites all of his new friends to go to the playground with him, and Chan’s father brings chow mein and potstickers for everyone to enjoy. At the end of the day, the air rings with each child’s special way of saying “good-bye.”

Liselotte Schippers’ free verse poetry opens the door to a world of children for young readers. Each poem gives children the kind of information they want to know about kids from around the world. What do they like to do? What are their families like? What do they eat? Every poem includes the words “hello” and “good-bye” in the native language of the child as well as a favorite dish from each country. Little Chan makes a delightful and enthusiastic tour guide to his multicultural neighborhood, and shows young readers that even though people may come from different countries, their dreams, desires, games, and even jobs are the same. The country that Chan has moved to is never named, making “here” everywhere.

Monique van den Hout’s beautiful illustrations combine the ethereal with realistic portrayals of the happy, bright-eyed children that Chan meets in his neighborhood. Each poem is presented on a two-page spread in which Chan and his new friend are surrounded by colorful images of symbols from that child’s native country. Following each poem, a short dictionary defines and gives a pronunciation guide to the greetings and food introduced.

Chow Mein and Potstickers is an enticing introduction to the global community for children. Each poem could be used to spark more discovery about the countries presented and their children. The book’s inclusion of languages and foods makes it a perfect addition to school, classroom, and homeschool libraries for social studies units as well as a fun book for personal bookshelves.

Discover more about Liselotte Schippers and her books on her website.

Learn more about Monique van den Hout, her books, and her art on her website. 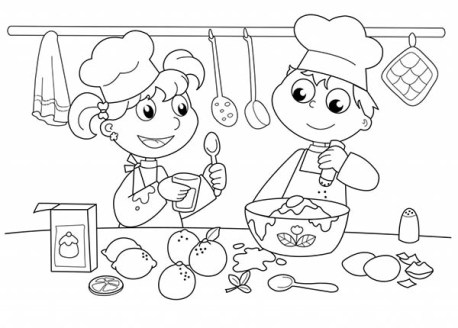 It’s fun for friends to create new recipes or just cook up some favorite treats! Have fun with this printable Let’s Bake Together Coloring Page!