Today, we remember that fairy tales often have their origin in the oral stories, myths, and legends of long ago. In addition to entertainment, their purpose was to teach a lesson, change behavior, or warn of dangers. Over the years magical elements and mystical creatures were added to the stories. The Brothers Grimm published their collection of stories in 1812 under the title Household Tales. The plots were darker and meant for more of an adult audience. Hans Christian Andersen’s work was first published in 1829. Through him, readers were introduced to The Ugly Duckling, The Little Mermaid, and today’s story. Over the years, fairy tales have evolved to include “fractured” versions—tales told by another character or with a funny or quirky twist. To celebrate today, reread some of your and your child’s favorite fairy tales—and discover some new ones!

La Princesa and the Pea

“There once was a prince who wanted a wife, / but not any niña would do in his life.” His madre demanded just the right sort of girl and said “No!” to all the princesses who wanted to catch the prince’s eye. But then along came a girl riding home to her castle who asked to stay “if it isn’t a hassle.” The girl winked at the prince and he was immediately smitten.

The prince invited her in, but his mother planned to test her to make sure she was “buena.” So “Mama crept away / to the royal jardín / and found a small pea / that was fit for a queen.” She went up to the guest room and called for twenty mattresses to be brought in. Then while she ate bon-bons, her workers carried the colchones in. The first mattress was soft, the second was small, the third was muy grande, and the fourth was un sueño—as comfy as a dream. Then came striped ones and dotted ones and ones that were fleece. There were red ones and blue ones and ones that were gris.

When the twenty mattresses were piled high on the bed, Mama showed the girl to her room. Seeing the soft bed, she said, “‘Thanks! I won’t even count sheep.’” But under the first mattress way down below sat the small pea. “Meanwhile el príncipe practiced ‘I do’s.’ / He knew that this maiden was the one he should choose.” But when he told his mama how much he liked the girl, she just said, “‘we’ll see.’”

In her room, “the girl stretched her brazos / and yawned with her boca. / But the bed felt so lumpy / like there was a roca.” That tiny pea—that little guisante—could that be the reason she just could not sleep? In the morning the maiden dragged herself down to breakfast, and when Mama asked how she’d slept, she answered, “‘Great…if you like hard and lumpy.’” But when she spied the prince, she cheered up and said, “‘it wasn’t that bad.’”

“‘¡Ay!’” Thought la reina. / How’d she detect it? / Is she a real princess? / I think I suspect it.” When the prince learned that the girl had passed the test, he gave her a golden anillo, and they married “that week in the royal castillo.” The wedding was huge and the girl’s dress most stylish. With “‘¡acepto!’” “‘¡acepto!’” they were quickly wed. And only the prince knows to this very day that he helped things along by adding “pitchforks and stones en la cama / to help his true love pass the test of Queen Momma.” The prince and the princess “had hijos galore. / One for each mattress and then had no more.” 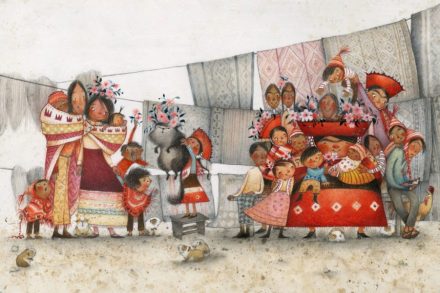 Susan Middleton Elya’s Latin-inspired take on The Princess and the Pea story is fresh and funny and puts control of the prince’s future in his own hands. Young readers will embrace this twist that shows when they know what is right for them, they can make it happen. The use of Spanish words throughout the story, and especially to create clever rhymes, make the verses as joyful to read aloud as they are to hear.

Juana Martinez-Neal’s warm colors and beautifully patterned clothing, inspired by Peruvian textiles, infuses this favorite story with a homey and family-centered, folk-tale feeling that sets it apart. Readers will be charmed by the llamas, guinea pigs, and even the grumpy cat that inhabit the castle and will want to linger over the softly colored illustrations to see every detail. The sweet looks between the prince and princess show their true love, and among their twenty children, readers may find la reina’s favorite(?) grandchild.

La Princesa and the Pea is a terrific addition to children’’s fairy tale book collection at home and in the classroom.

Discover more about Susan Middleton Elya and her books on her website.

To learn more about Juana Martinez-Neal, her books, and her art and find lots of fun story-related activities visit her website. 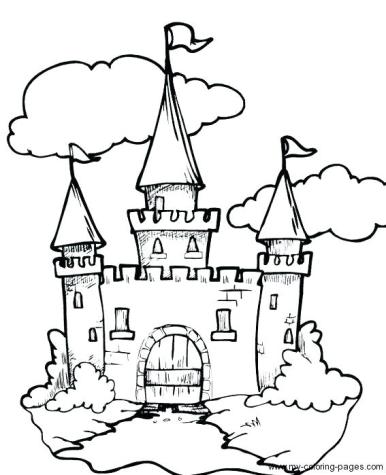 What’s a fairy tale without a castle and maybe a dragon or two? Have fun coloring these pages, then make up your own story!