I was honored to host the cover reveal of Comet the Unstoppable Reindeer on March 11 and am thrilled to be part of Jim Benton’s book tour as this story about the beloved Comet is launched around the world, just in time for Christmas. This funny and poignant book will light up Christmas-season story times with joy and themes that will be remembered all year round.

Thanks goes to Two Lions and Blue Slip Media for sharing Comet the Unstoppable Reindeer with me for review consideration. All opinions about the book are my own. I’m also thrilled to be teaming up with them in a giveaway of the book. You can find details below.

“’Twas the Night Before Christmas….” We know how this one goes, right? Or do we? Let’s see…

It seems all this work, work, work, had left the elves in bad moods, especially Stinky and Stanky who got into it over wrapping a present. Seeing that their argument might escalate, Comet hoofed in to break it up, only to be knocked out colder than a North Pole winter. While Comet’s intervention worked as he’d hoped, when he woke up, his arm didn’t. The doctor set Comet’s broken arm in a cast. When Comet jumped up to get back to work, though, the doc gave him the bad news: “‘No dashing, no dancing, / your arm, it needs fixin’. / It will be a long time / before you’re prancing with Vixen.’” Comet was sad to miss out on the big night, but he went down to the launch anyway,  only to see that his replacement was a “rookie named Freddy.” Although the other reindeer were skeptical about Freddie’s flying prowess, they took off into the sky as usual.

Finished for the night, the elves headed to their homes, leaving Comet in the workshop all alone. But what was THIS? There in the corner and reaching up to the ceiling was Santa’s bag of toys! Comet did what any conscientious reindeer would do: “he called Santa’s cell.” Getting no response, Comet knew Christmas was all up to him.

Try as he might, though, Comet couldn’t lift that bag of toys. He was about to give up when he noticed a letter lying on the floor. He sat down with a mug of hot chocolate and a few plates of cookies and began to read. He was expecting the usual, but this letter was from a little boy asking for something for his sister. It said: “‘She’s too small to write, / but I know what she’d like: / a little green pig / on a little pink bike.’”

But the letter writer didn’t stop there. He added that he knew there were a lot of deserving kids in the world and told Santa it would be all right if he couldn’t bring his sister the pig, ending with “‘She won’t cry a bit. / She won’t even pout. / Just don’t wear yourself / or your poor reindeer out.’” By the time he’d finished reading, Comet had tears in his eyes. No one had ever considered the reindeer before. Comet looked up, up, up at that heavy, heavy bag and saw at the top… “that little green pig.” Comet thought about that bag and his broken arm, and then, with only one reservation, “he hefted that bag / like a brave little fighter. / ‘Would it kill kids to ask / for some toys that are lighter?’”

So Comet took to the sky, carrying that sackful of toys, and touched down in countries from East going West. His travels were fraught with mishaps aplenty. After losing a tooth and getting nearly run over, he flew “on to Egypt and Sweden, / Italy and France, / where he scraped up his butt / (‘cause he didn’t wear pants).” Trips to every city in the world, along with a few more painful encounters, brought Comet no closer to finding the yellow house with a blue roof where the boy and his sister lived.

Comet consulted his map once more and a single tear dropped onto a place he realized he’d missed. He reached the yellow house just as the sun was rising over the horizon and slipped down the chimney. There he was met by the little boy and his sister. Just as he was handing them their gifts, the “phone gave a jingle. / ‘I’ll get it,’ said Comet. / ‘I’ll bet it’s Kris Kringle.’” And it was with many thank-yous and “‘a vacation,’ said Santa. / ‘Can the elves have one too?’ / asked Comet, who knew that’s / the right thing to do.’” 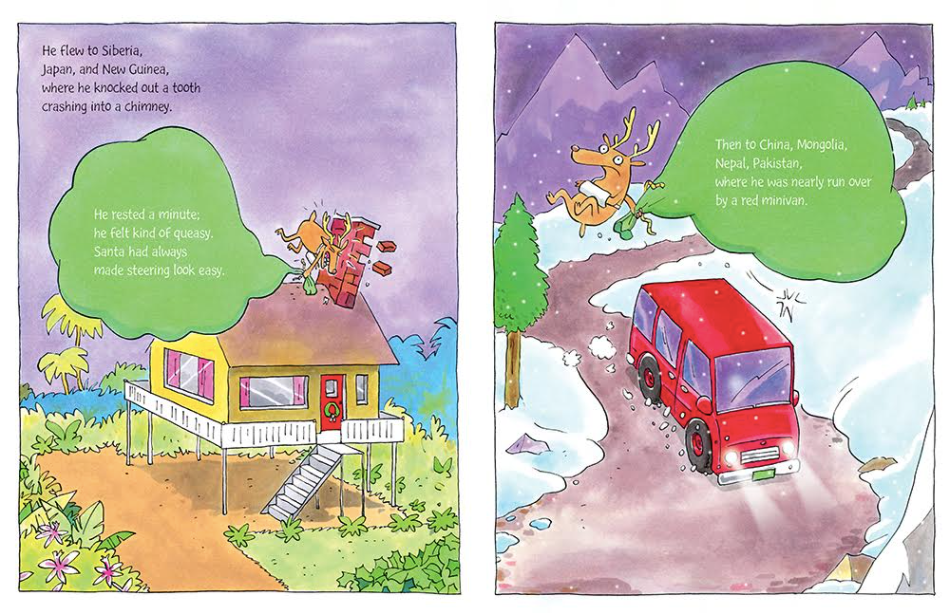 Laugh-out-loud funny and with a message about going above and beyond for family and friends, Comet the Unstoppable Reindeer will become a kid-favorite in any house for Christmas and throughout the year. Comet’s misadventures on his travels around the globe are slapstick gems kids will want to hear over and over. Adults will also find themselves “Ho-ho-hoing” at Jim Benton’s bouncy rhymes and funny wordplay as well as Comet’s hilarious thoughts that echo ones we’ve all had at one time or another. Amidst all the fun, too, is a heartfelt story about thinking of others, kindness, and the true meaning of giving that will impress and cheer kids.

Benton’s expressive, madcap cartoon illustrations will have kids giggling at the overworked elves wrapping presents with fatigued, bored expressions, the goofy reindeer (especially Freddy), and Comet’s valiant efforts to lift the enormous bag. Images of Comet’s accidents and near misses will be met with guffaws. Benton’s illustrations also show many examples of empathetic kindness, deep appreciation, and unstoppable perseverance that will resonate with kids beyond the holiday season.

Sure to be asked for again and again on its way to becoming a Christmas tradition, Comet the Unstoppable Reindeer would make a perfect pre-holiday gift for your own family or any child. The book will be a favorite addition to home, school, and public library collections.

Jim Benton is the award-winning creator of the New York Times bestselling series Dear Dumb Diary and Franny K. Stein as well as the popular It’s Happy Bunny brand. His books have sold more than fifteen million copies in twenty-five countries and have garnered numerous honors. Like Comet, Jim knows what it’s like to hobble around in a cast; however, he is still learning to fly. Find out more about him at www.jimbenton.com. 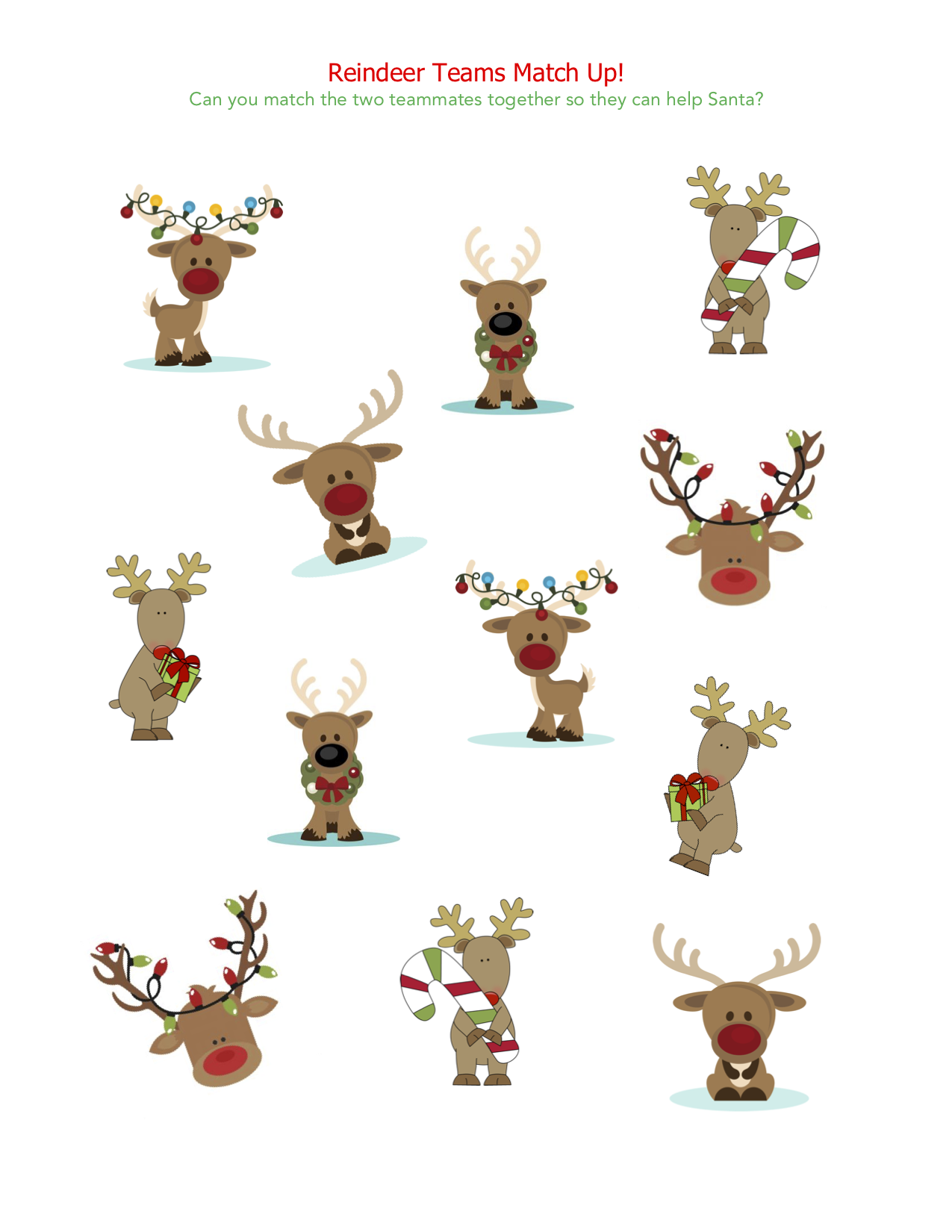 Match the two-member reindeer teams so they can help Santa in this printable puzzle!

You can find Comet the Unstoppable Reindeer at these booksellers