With so many gift-giving opportunities this month, December is the perfect time to discover new books for any age! Whether you’re sharing the fun or traditions of a holiday, adding to a favorite series, looking to inspire with nonfiction, or buying a baby their first book, the delight, wonder, and shared experiences of reading offers is one of the best presents you can give. This month visit or order from your local independent bookstore to pick out special books for the loved ones on your list. (And don’t forget to treat yourself!)

Anna was composing an email to Santa, letting him know her house would be a new stop on his route since her new dad and stepbrother celebrated Christmas. She promises him that she’s going to leave him “the best Santa treat ever.” Hearing this, Anna’s brother Michael countered that his cookies were “the best Santa treat ever.” In the kitchen, Michael invited Anna to help him bake, but she was trying to think of something better than cookies.

Her mom was making Bubbe Sadie’s. matzo ball soup, and the aroma made Anna think this would make the perfect snack for Santa. But Michael reminded her that Santa needed finger food, and she imagined “Santa gulping on his sled. / Slurp. Burp. Slop. Spill. / Matzo balls on Santa’s head.” That would never do, she thought. Then she spied Aunt Bea’s noodle kugel on the counter and knew the “sweet taste of noodle kugel” would be just the thing.

His sugar cookies finished, Michael had moved on to making the oatmeal cookies he said Santa loved. He mentioned that Santa wouldn’t be able to eat kugel with his fingers, and Anna pictured him trying with disastrous results. How about Aunt Sarah’s delicious tzimmes root vegetable stew. But was it finger food? Michael didn’t think so. And Santa so loved his chocolate chip cookies. “Anna imagined— A bowl of stew zipping by. / Santa spooning on his sled. / Slurp. Burp. Slop. Spill. / Gobs of stew on Santa’s head.”

Anna went off to think about the perfect treat, and finally it came to her. In fact, her mom had just made a batch. She went to the kitchen, put some on a plate, and hid them for later. That night she stayed awake until the house was silent. Then she snuck into the pantry and placed four latkes on the plate with Michael’s cookies. This time she imagined Santa happy and satisfied as he nibbled on the latkes. “The wind whistled Christmas songs. The stars twinkled like Hanukkah lights” as Anna waited to hear Santa’s reindeer land on the roof. She just closed her eyes for a second… and then Michael was waking her up on Christmas morning.

They ran downstairs and were excited to find that not only had Santa taken all of Michael’s cookies, he’d also grabbed all of Anna’s Latkes. Just then there was a familiar bing from the computer. Anna found an email from Santa saying how much he’d loved her latkes and was already looking forward to next year’s treat. He’d boasted about them so much, in fact, that Mrs. Clause wanted Anna’s recipe.

Reading this, Michael decided that maybe cookies were kind of boring after all, and suggested Grandma Linda’s lemon jello. Was that a finger food? Anna didn’t think so, but she was sure they could come up with something Santa would love. After all, they had a whole year to think about it. 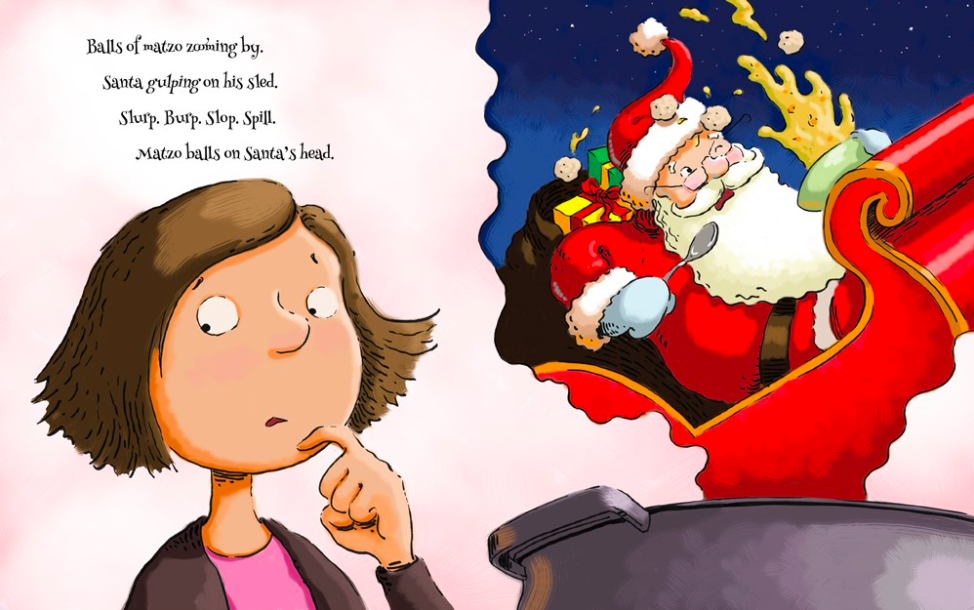 Janie Emaus’s original story focused on a favorite part of Christmas Eve traditions—Santa’s snack—presents a clever and inclusive way for blended families to celebrate the joys of Hanukkah and Christmas together. Through Anna’s humorous imaginings of Santa trying to eat matza ball soup, kugel, and tzimmes, Emaus offers readers funny rhyming verses with repeated phrasing that kids will love to chime in on, especially “Slurp. Burp. Slop. Spill.” Michael and Anna’s sibling rivalry over the snack is good-natured and shows how this new brother and sister pair are quickly becoming a team. The list of traditional Jewish dishes will excite kids who already love them and entice those who aren’t to try them. Anna’s impressions of the world outside her window on this special night invite readers to embrace both of these meaningful holidays and those who observe them.

In Bryan Langdo’s vibrant and engaging illustrations, Hanukkah and Christmas reside side-by-side, just as Anna and Michael do. A menorah is prominently displayed on the fireplace mantle and Michael spins a dreidel while Christmas lights line the walls and a Christmas tree stands lit and decorated nearby. When the kids take to the cozy kitchen, Anna’s grandmother stands at the stove stirring a large pot of matza ball soup. The banter between Michael and Anna over Santa’s treat ushers in vivid and giggle-inducing images of Santa trying to spoon up splashing soup, dodging flying bowls of kugel, and finally wearing the bowl of stew on his head all while attempting to steer his sleigh. Sketched with a light touch, Langdo’s characters are charming and warm, and Anna and Michael are delightful siblings to carry this story about acceptance and family love.

A fun and inclusive story for Hanukkah and Christmas celebrations and to celebrate the joys of family, Latkes for Santa Claus would make an excellent gift for pre-holiday story times and baking and a charming addition to home, school, and public libraries for any time of the year.

Discover more about Janie Emaus and her books on her website.

To learn more about Bryan Langdo, his books, and his art, visit his website.

With this coloring sheet and puzzle, you can put together a plate of latkes for Santa – or yourself!

You can find Latkes for Santa Claus at these booksellers