If you’re a gardener, you know how prolific summer squash plants can be! By now you’re probably knee deep in luscious zucchini and yellow squash. Of course, they’re delicious—giving a snap of flavor to side dishes, salads, pastas, and even breads—but, really, how do you keep up with the harvest? Today’s holiday offers a suggestion. Perhaps, you can put together a box or basket of fresh squash with a recipe or two and—when no one’s looking—leave it where a neighbor or a friend will find it. What to do if all of your neighbors and friends are gardeners too? Have a zucchini party!

Summer vacation was only three days old, but already Zora was bored. She was tired of riding her bike aimlessly around the neighborhood. But this time when she rode through town, she noticed a Free Zucchini sign in the window of the hardware store. She liked that the plant’s name began with a Z like her name, so she loaded up her basket and went home.

Zora showed her dad her new plants. As she carefully dug in the garden and settled them in, her dad said “‘That’s going to be a lot of zucchini.’” “‘We’ll eat it!’ Zora promised.” All June and July, Zora tended her garden, cheering “every time she saw a yellow-orange zucchini blossom.” When Zora saw her first zucchini, she picked it and ran inside to show her family. Soon, they were enjoying zucchini for breakfast, lunch, and dinner. There was zucchini bread, zucchini soup, and grilled zucchini. “By the first day of August, Zora’s garden was a jungle of prickly, tickly, bushy, blossomy plants,” and each one “was covered in zucchini. There was no way her family could eat it all.”

When Zora peeked into her neighbor’s yard, she noticed there was no zucchini in her garden—but plenty of tomatoes. She asked Mrs. Thompson if she’d like to trade. Mrs. Thompson was delighted to swap a bushel of tomatoes for a bushel of zucchini. But Zora’s zucchini kept on coming. “‘This is crazy,’ Zora said.” She filled her bicycle basket and rode through the neighborhood, giving them all away. But the day after that, more zucchini was ripe for picking. Then Zora had an idea and got her family involved. “Her brother painted the signs. Her parents printed the fliers. Zora and her sister posted them all over the neighborhood.” 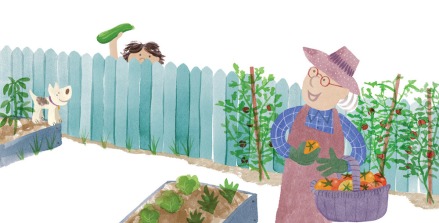 On Saturday, Zora stood next to her homemade stand that sported a sign that read: “Take a Veggie, Leave a Veggie” with an added entreaty that said “Or at least please take some zucchini.” As sun rose in the sky, though, no one had visited her stand. But then Mrs. Rivera came by with a bowl of raspberries, Mr. Peterson brought potatoes, and others traded carrots, green beans, and peppers as well as apricots, plums, and cherries. “Zora traded and traded until all her zucchini was gone.”

But Zora’s Garden Swap stand had done much more than share fruits and vegetables. As she looked around at all of the people laughing, talking, and nibbling, she realized that “her zucchini garden had brought so many people together.” She couldn’t wait for next year’s garden!

Back matter includes a note about gardening and the amount of food from a prolific garden that can go to waste. It also includes ideas for donating, preserving, and sharing excess harvests.

Katherine Pryor’s easy-going storytelling and gentle humor will charm kids with its realistic portrayals of the excitement that every growth spurt, bud, and blossom in a garden creates. As the zucchini keeps coming, Zora’s family’s willingness to keep trying new recipes is heartening, and their help in making her Garden Swap Stand a success shows welcome family unity and support. Zora’s outreach, first to one neighbor, then to individuals throughout her neighborhood, and finally through her stand, encourages creative problem-solving. As Zora realizes that her garden has brought many people together, readers will also embrace the ideas of camaraderie and sharing and see that they too can foster such friendship in their school and community. For today’s food-savvy and socially conscious kids, Pryor’s addressing the issue of food waste and ways to share our bounty with others will appeal to and resonate with children. 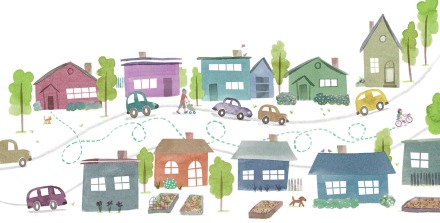 Anna Raff’s cheery illustrations sparkle with the enthusiasm of children who go all in on a new interest. Kids will love seeing the zucchini plants grow from tiny seedlings to leafy giants that produce a flood of zucchini. Raff clearly shows Zora’s disbelief in her inexhaustible supply of squash and puzzlement as to what to do with it all, letting readers join in on her ever-growing problem. As Zora tries one solution after another and then hits on an idea, suspense grows, helped along with Raff’s visual clues in the signs and fliers her family makes. When the neighbors come together, smiling and chatting, at Zora’s stand, readers can see what a close-knit community can accomplish.

Sure to inspire a child’s interest in gardening and community sharing, Zora’s Zucchini, an award-winning book, is a fantastic addition to home, classroom, and public library shelves. The book also makes a fun pairing with picnics and visits to farmers markets and food festivals.

Discover more about Katherine Pryor and her books on her website.

To learn more about Anna Raff, her books, and her art, visit her website.

National Sneak Some Zucchini onto Your Neighbor’s Porch Day Activity

If you have zucchini to spare, you’ll love this delicious zucchini bread from Creme de la Crumb that’s sweet and moist and flavored with the homey taste of cinnamon! To find this scrumptious recipe and lots more, visit Creme de la Crumb!

You can find Zora’s Zucchini at these booksellers