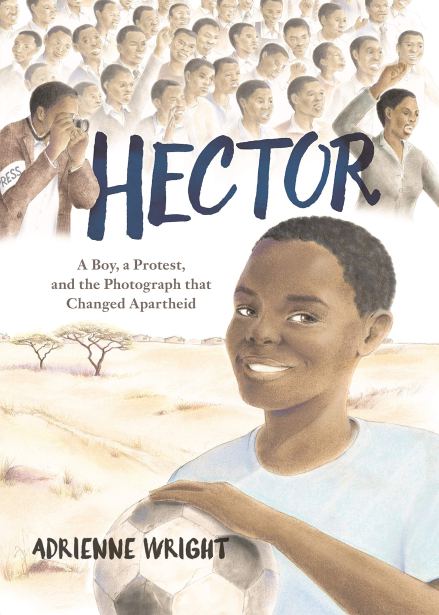 Photography is all about providing information through images. A picture really can be worth a thousand words in capturing a moment of surprise, joy, danger, or sadness. Well-placed photographers, videographers, and cinematographers have given voice to some of society’s pivotal moments, allowing the whole world to witness change, sometimes as it happens. Today we celebrate the “art, craft, science, and history of photography,” as well as those photographers who often put themselves in danger to get the story as well as those who bring us much-needed lighter moments. To learn more visit the World Photography Day website.

Hector: A Boy, a Protest, and the Photograph that Changed Apartheid

This powerfully emotional book opens with a recollection by Sam Nzima, the photojournalist who captured this pivotal event and a brief history of South Africa and the segregation and governmental restrictions that led up to the protest in 1976 which resulted in Hector Zolile Pieterson’s death. The compelling story, illustrated in graphic novel style, is broken up into three “chapters.”

The first introduces Hector, a twelve-year-old boy who loved playing soccer, watching movies, and visiting family. After his normal weekend chores, Hector would run errands for his neighbors to make a little money. Hector was happy, but things were changing at his school. The government had passed a law that instead of the international language English, black students must be taught half of their subjects in Afrikaans, a language derived from Dutch and spoken by descendants of the early Dutch settlers. This “added hardship to students and teachers in an already oppressive education system.” As he counted the money he’d made, his mother reminds him to count in Afrikaans, since that is what will be required in school.

On June 14, 1976 Hector visited his granny Mma. When he left, she gave him some money for his mother. On the way home, he was waylaid by men trying to steal the money. Hector was able to escape with the money and decides not to worry his Mma by telling her. On June 16, Hector heads off to school, but when he gets there, he sees the students “chanting and singing” as they all march toward Orlando Stadium to protest the new Afrikaans law. “More students join in, and soon hundreds, then thousands of people are marching. Hector is swept up in the excited activity of the growing crowd.”

Ahead on the road the protesters see the police and a blockade. The students begin marching down another street. They wave signs and sing the “government-banned anthem, ‘Nkosi Sikelel’ iAfrica’—’God Bless Africa.’” The police confront the students, blowing their whistles, shouting, and throwing tear gas. Suddenly, Hector hears his sister, Antoinette’s voice warning him to run home. Shots ring out.

The second chapter introduces Antoinette, who on June 16 is leaving for school from Granny Mma’s house. She knows about the planned protest but says nothing to Granny Mma. She joins the crowd waving signs and chanting. Then “POW! Tear gas explodes in the air. Students scatter in all directions,” and Antoinette sees Hector. As they run for cover, they become separated. Shots ring out all around them. When the smoke dissipates, Antoinette sees a teenager running towards a car with a boy in his arms. “She can’t see the child’s face, but when she sees his shoe…” 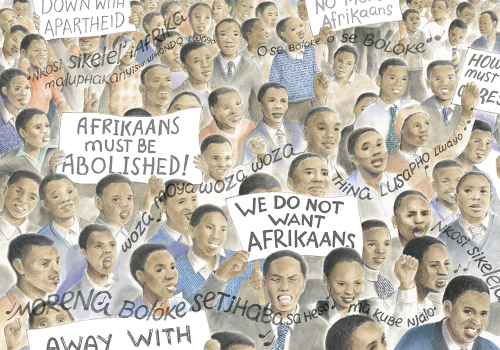 The police see Sam taking pictures and confiscate his film. But Sam has hidden the most important roll in his sock. “His picture of Hector, Antoinette, and another student runs on the front page of the newspaper.” At Granny Mma’s house, Hector’s family grieves his loss; around the world “Hector lives on as a compelling symbol of the cost of apartheid and the change sparked by students that day.”

The final spread shows the black-and-white photograph of Mbuyisa Makhubu carrying Hector with Antoinette running alongside. Back matter includes a short discussion that expands on the events of June 16, 1976 and the years that followed in the fight against Apartheid. An Author’s Note; short biographies of Hector, Antoinette, Sam Nzima, and Mbuyisa Makhubu; and a glossary also follow the story. 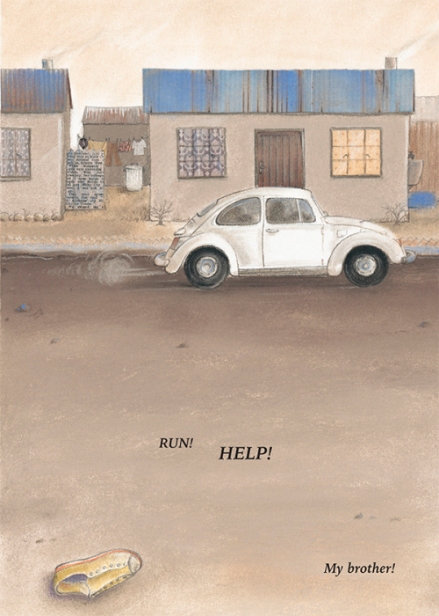 Adrienne Wright’s gripping storytelling and evocative illustrations go hand-in-hand to present a full portrait of young Hector, his life, his sweet nature, and his dreams. His family’s close bonds and their concern for each other is evident in the dialog that accompanies images of Hector playing, helping Mma and Granny Mma, running errands, and interacting with his sisters. As June 16 dawns, Wright sketches a normal day, with Hector joking with his mother at home and his friend on the way to school.

As it did for Hector, the protest comes as a surprise for readers, sweeping them up into the action just as Hector was. Antoinette’s chapter is the shortest but gripping in its pacing that mirrors the turmoil of the day and her tragedy. As readers enter Sam’s viewpoint, they see, blocked off in vertical and horizontal frames, the pictures of celebrating and happy, yet serious students marching to make a difference. The moment of the shot is seen through Sam’s lens and clouded in smoke.

Wright’s use of overlapping storylines as she transitions from Hector’s account to Antoinette’s and then to Sam’s adds to the tension, drawing readers in and reinforcing their understanding of the atmosphere and what the students were protesting. The final, nearly full-page reproduction of the actual photograph is an unflinching look at the reality of that day, what it stands for, and its personal cost.

A profound narrative for teaching children about South African history, the costs of discrimination, and the personal stories involved in any conflict, Hector is an important book to add to school and public library collections.

Ages: The book is targeted for children from eight to twelve, but adults should be mindful of the maturity and sensitivity of readers. Hector would also be a compelling inclusion in middle school and even early high school social studies and history classes.

To learn more about Adrienne Wright and her work, visit her website.

Photojournalists and journalists cover the news and sometimes put themselves in danger to bring readers true stories of events happening around the world. With this craft, you can make these clothespin figures that honor the men and women who work to keep us all informed.

Idea for displaying the figures

You can find Hector: A Boy, a Protest, and the Photograph that Changed Apartheid at these booksellers