There are many things to be thankful for this month and all throughout the year. At the top of the list would be our friends—both old and new. Celebrate your friendships during the holidays and tell them how important they are in your life!

Two Lions sent me a copy of King Ben and Sir Rhino to check out. All opinions are my own. I’m also excited to be partnering with Two Lions in a giveaway of the book. See details below.

Ben was the king of his jungle—his room, his toys, and his servants called Mom and Dad. “Indeed, Ben had everything except a loyal subject.” When he demanded that the elephant, zebra, and monkey kids play with him, they just laughed and ran off. Then he met a rhinoceros!” The rhinoceros was happy to have someone to play with too as with a stick Ben knighted him “Sir Rhino.”

“Then fun was proclaimed.” First, Sir Rhino pushed Ben in the wagon, next up were games. The rhino became Ben’s soccer goal and ladder for him to reach the basketball net. At snack time Ben directed Sir Rhino to climb up on a stack of books piled on a chair to reach the cookies. Ben then doled them out—two for Sir Rhino and the rest for him.

After that Ben “decreed mayhem.” During a moment of rest, Ben noticed Sir Rhino playing with his own stuffed rhino toy. “Mine!” he demanded, swiping it from the rhino’s hands. “After all, a king can have what he wants.” But Sir Rhino had had enough. With tears in his eyes, he chased Ben around the room to recover his toy.

Finally, he caught one of the little toy’s arm and tugged while Ben pulled on the other side. Suddenly, with a “RIP!” the rhino was holding only an arm. He ran from the room crying while Ben looked on confused. Ben looked around his empty court. He “missed his loyal subject…his favorite subject.” Then he knew what he had to do.

Ben repaired Sir Rhino’s toy and set out to find him. He looked in treetops, under giraffe, down gopher holes, and even in the river. He finally found rhino alone on the swings. With an apologetic expression he held out Sir Rhino’s toy. “Will you still you still play with me?” Rhino embraced his toy…and Ben, and “a joyous celebration followed.” The next day they played together and Ben let Rhino play with his toys. “Now Ben knows that to be a great king of the jungle…he must be a great friend.” Now Ben even shares his crown!

Author Eric Sailer’s debut picture book takes on the sometimes-tricky relationship between two new friends and shows little ones that sharing and consideration for others is what real friendship is all about. Sailer’s narrative text, incorporating called-out words such as proclaimed, declared, and decreed as well as words of royalty, sets the tone of Ben’s interactions with his parents and others while his dynamic illustrations show the effects of Ben’s entitled attitude on Rhino. Rhino’s initial excitement in making a friend turns to bewilderment, disappointment, and tears as Ben orders him around instead of treating him fairly. When Rhino leaves, Ben finally comes to the realization that his actions have consequences. He seeks out Rhino, apologizes, and discovers that sharing the limelight, his toys, snacks, and other things brings joy and true friendship.

For kids navigating the various paths of friendship, King Ben and Sir Rhino offers ways for adults to talk with their children about behavior and their relationships with classmates, siblings, and others.

Discover more about Eric Sailer and his work on his website.

I’m excited to partner with Two Lions Publishing in this giveaway of:

To be entered to win, just Follow me on Twitter @CelebratePicBks and Retweet a giveaway tweet during this week, November 15 – 21. Already a follower? Thanks! Just  Retweet for a chance to win.

A winner will be chosen on November 22.

Giveaways open to US addresses only. | Prizing provided by Two Lions Publishing.

Three kids would like to help their friends build a snowman. Can you help them reach their friends int his printable Friends Are A-Maze-ing Puzzle? 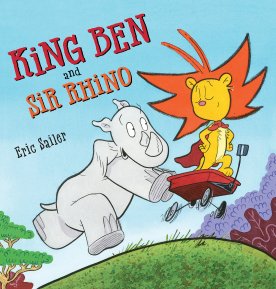 You can find King Ben and Sir Rhino at these booksellers