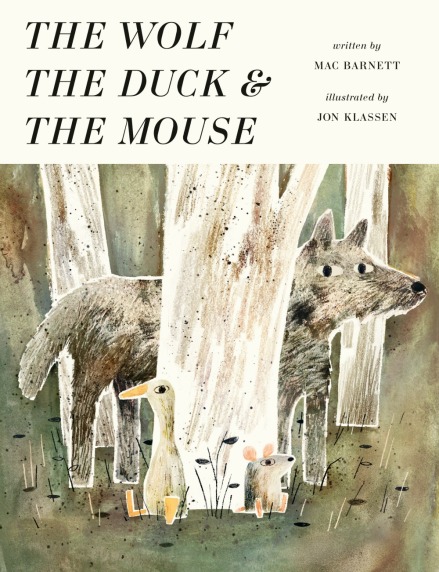 On this last day of National Humor Month (also known as April), take some time to enjoy a laugh with a friend or family member or even a pet. It’s a perfect day to share some laugh-out-loud funny stories like the one in today’s book.

The Wolf, the Duck, and the Mouse

Early one morning a mouse came face to face with a wolf, “and he was quickly gobbled up.” The mouse was very elegant in his speech and proclaimed, “‘Oh woe!’… ‘Oh me! Here I am, caught in the belly of the beast. I fear this is the end.’” Imagine his surprise when he heard a not-so-elegant voice tell him to “‘Be quiet!’” because the mouse was disturbing his sleep. The mouse demanded to know who was there. 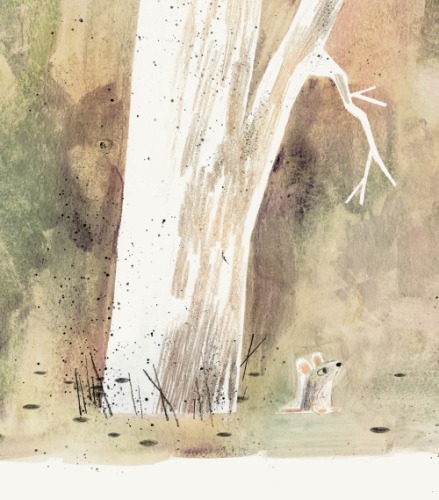 Suddenly, the wolf’s belly was illuminated by the flame of a candle, and the mouse saw a duck sitting up in bed. “‘Oh,’” he said. The duck was a bit perturbed by the mouse’s low-key response, especially since he had been wakened in the middle of the night. Now, though, it was the duck’s turn to be surprised as the mouse told him that it was not the  middle of the night outside, but only morning. The duck admitted that he wished “this belly had a window or two,” and then graciously offered to make breakfast. 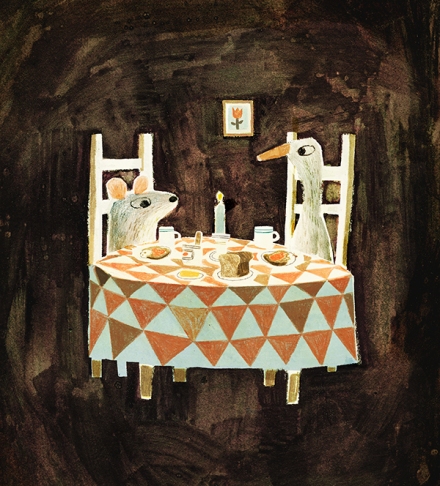 The mouse declared the breakfast “‘delicious,’” and inquired where the duck found jam and a tablecloth. He may also have been curious about the dishware, the bread, and even the table, chairs, and framed picture, but he was satisfied with the duck’s answer that “‘you’d be surprised what you find inside of a wolf.’” As the duck continued to talk about his home, the mouse was astonished to learn that the duck lived there. “‘I live well!’” the duck said and went on to explain: “‘I may have been swallowed, but I have no intention of being eaten.’” 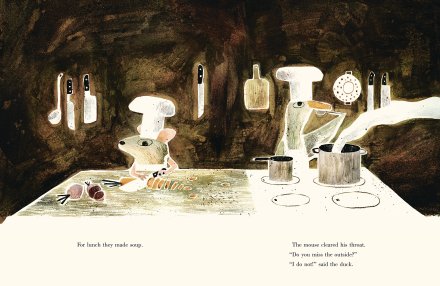 Making lunch was a joint effort, and when the mouse asked if the duck missed living outside, he emphatically stated, “‘I do not!’” It seemed that when he was outside, the duck was full of the fear of being eaten. Inside, he was free of that worry. The mouse considered the wisdom of this notion and asked if he could live there too. The duck agreed and then played a record and danced a celebratory jig.

All this commotion was making the wolf feel sick. He attributed his aches and pains to something he ate. The duck was no doctor, but he was clever. He shouted up from the depths of the wolf’s belly and gave him “the cure.” According to the duck, ingesting “‘a hunk of good cheese…a flagon of wine…and some beeswax candles’” would do the trick and make him better. 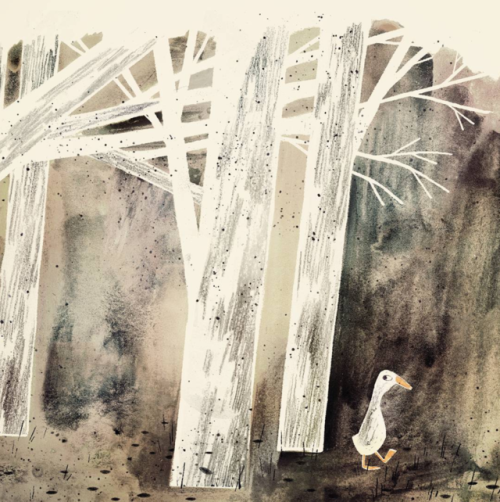 That night the mouse and the duck ate like kings and toasted the wolf’s good health. But the wolf was not feeling robust. In fact, he felt worse. A passing hunter heard the wolf groaning. He raised his gun and pulled the trigger, but he missed. Realizing what the blast meant, the duck yelled for the wolf to “‘run for our lives!’” In trying to escape, however, the wolf got tangled in the roots of an old tree. 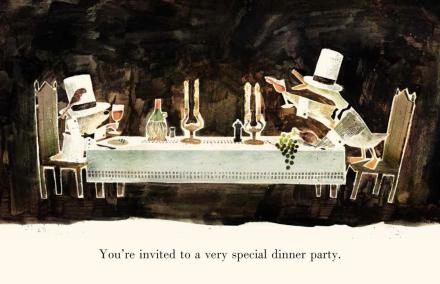 The duck and the mouse determined that that very night they would “‘ride to defend [their] home.’” When they were ready, the wolf opened his mouth, and the mouse and duck—armed with a hockey stick, protected with sauce pan and colander helmets, and yelling “‘Charge!’”—flew out and chased the hunter. “‘Oh woe!’” he cried. “‘Oh death! These woods are full of evil and wraiths!’” He ran and ran until he left the forest, and he never returned. 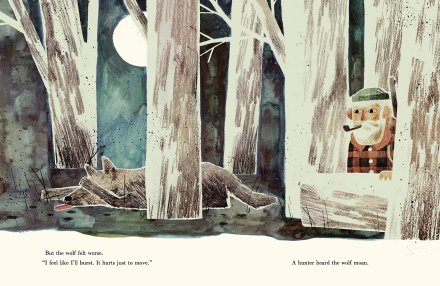 The wolf was humbled by the sacrifice the mouse and the duck had made for him and offered to grant any request. “You can guess what they asked for.” And while they continue to dance the never-ending night away, “the wolf howls at the moon. ‘Oh woe! Oh woe!’ Every night he howls at the moon.” 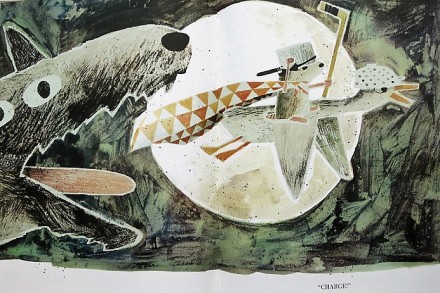 Remember when the Big Bad Wolf gobbled up Granny and Little Red Riding Hood and they survived in his belly until the huntsman cut them out? How was that possible? Mac Barnett reveals the inner workings of this conundrum in this laugh-out-loud fable. The archaic, melodramatic dialog will have readers giggling and participating aloud, as they have to agree with the ingenious duck’s “when life gives you lemons…” philosophy. It’s a good attitude to adopt as we all “get swallowed up” at some point. The trick is learning how to turn misfortune into fortune—or at least a fortunate happenstance. The suitably silly, non-sentimental circumstances will delight kids who relish a bit of the macabre—and, really, who doesn’t? 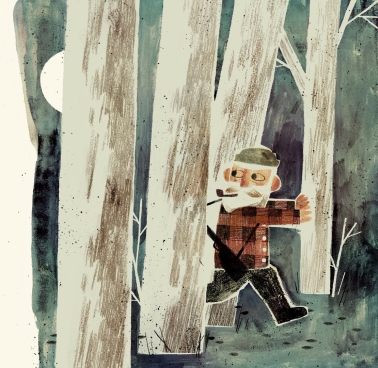 Jon Klassen brings his signature deadpan style to this funny story, enhancing the humor with his matter-of-fact drawings that let the scenes speak eloquently and humorously for themselves. As the recently gobbled-up mouse sits gazing forlornly into the wolf’s cavernous belly, readers will experience a tickle of suspense imagining what else lies within. When kids see the stash of good stuff the duck has amassed, their little eyes will grow wide with delight. This amusingly dark tale is fittingly lit with candlelight, the errant blast of the hunter’s gun, and the full moon that hears the wolf’s lament.

Put the The Wolf, the Duck, and the Mouse on your bookshelf and it won’t stay idle long. For quirky, comical home, classroom, and library story times this book can’t be eat…I mean beat.

Discover more about Mac Barnett and his books on his website.

You’ll find a gallery of illustration work by Jon Klassen on tumblr.

You know you want to gobble up this The Wolf, the Duck, and the Mouse book trailer! 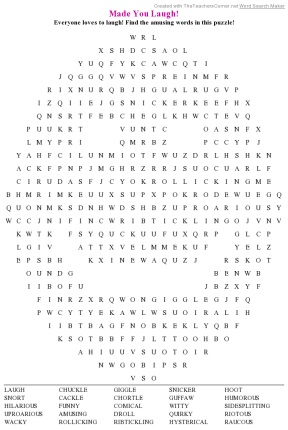 Made You Laugh! Word Search Puzzle

Humor and laughing are such a part of our lives that there are lots of words for this universal emotion. Can you find all the words for laughter in this printable puzzle?