PB & J is a perennial favorite! These tasty sandwiches are so popular that the average American will eat more than 2,000 by the time they graduate from high school! In the early 1900s, peanut butter was a rare treat, served only in the most upscale New York City tea rooms. When, in 1896, an article in Good Housekeeping offered instructions on grinding your own peanuts, and Table Talk magazine published a recipe for making a peanut butter sandwich, peanut butter began to enter the mainstream. The first mention of combining jelly with peanut butter may have been by Julia Davis Chandler in 1901. Peanut butter became an inexpensive lunchtime favorite of children in the 1920s and was a staple of WWII ration lists for soldiers. Today, peanut butter and jelly feature prominently in both sweet and savory dishes of all kinds. To celebrate, you know what to do!

I’m thrilled to partner with Tundra Books in a giveaway of one copy of Peanut Butter and Jelly! See details below.

Peanut Butter and Jelly: A Narwhal and Jelly Book

A Sweet and Salty Story!

When Narwhal comes upon Jelly eating what looks like a delicious waffle, he wants in! But it’s not a waffle, Jelly tells him; it’s a peanut butter cookie! Narwhal thinks this sounds ridiculous, and Jelly is shocked to find out that Narwhal has never heard of peanut butter. Narwhal tries to imagine what it tastes like. “Like strawberries? Pickles? Stir-fried licorice?” Jelly feels a little sick – especially when Narwhal suggests it tastes like all three combined. 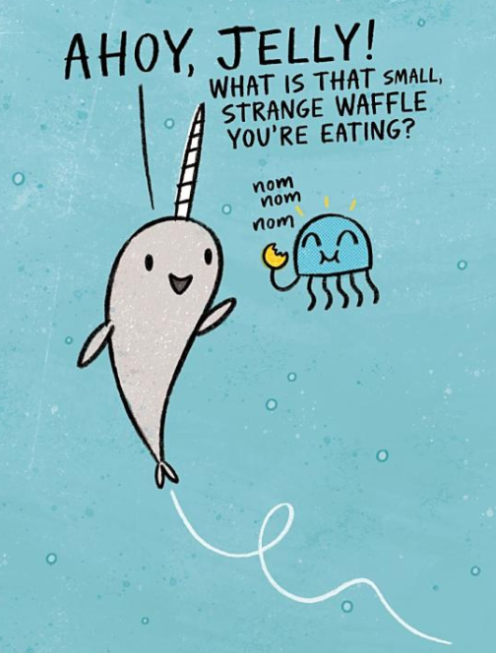 It turns out that Narwhal only eats waffles and has pretty much missed out on all the best food groups: pizza, spaghetti, even guacamole. Jelly offers Narwhal a taste of his cookie, saying “maybe you’ll like this cookie even more than waffles!” Well, Narwhal thinks this is even more ridiculous than the cookie itself. But after Jelly offers to make him a Narwhal-sized waffle if he just takes a nibble, Narwhal relents. He takes the smallest of bites, and… his eyes fly open and he proclaims it “fintastic! He loves the sweetness, the saltiness, the yumminess…. In fact, it’s so “yumptious” that it’s… “all gone! Whoops!” 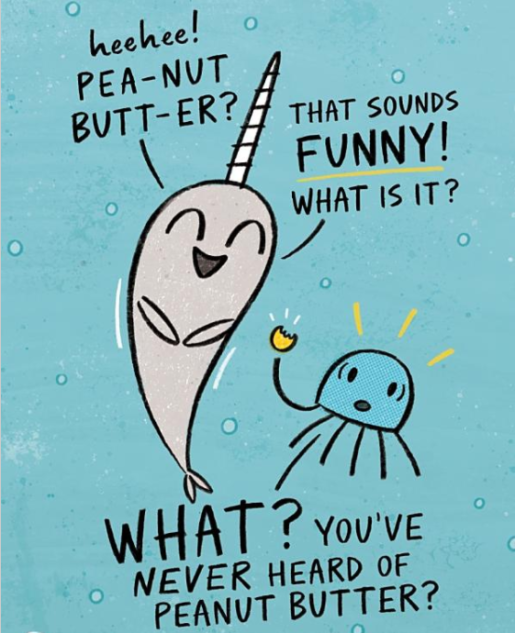 Jelly just can’t get Narwhal’s attention. Why? Because he’s changed his name from Narwhal to… Peanut Butter! Jelly is incensed. He doesn’t think it’s normal to just up and change your name like that, but Narwhal assures him that it’s fine. After all, he used to be called Fred, and before that his name was Bob. Yes, he’s had a whole string of names that even includes Sir Duckworth.

Jelly is getting so confused. He’s worried that Narwhal is taking the whole peanut butter thing way too far—especially when he finds out that Narwhal hasn’t eaten anything but peanut butter since he had that cookie. And now his jar is empty! There’s only one thing for Narwhal to do—swim off to get another jar. Right, Floyd? “Floyd?” Jelly thinks. Hmmm… “Floyd…”

Super Waffle and Strawberry Sidekick vs. PB & J, by Peanut Butter and Floyd

A monstrous pickle is on a rampage! It’s time for Super Waffle and Strawberry Sidekick! “But before they can take a slice out of that pickle…,” Peanut Butter Bread and Jelly Bread are on the scene. They make a pickle sandwich and vanquish him in no time, declaring that pickle “no big dill.” Just then, though, “a jealous gelatinous jam” picks up Jelly Bread and is about to munch. Now, it’s “Super Waffle and Strawberry Sidekick to the rescue!” They tame that glob of jam a with an even better dance jam!

Something is all kerflooey in the ocean. Narwhal is suddenly much smaller than Jelly, and he’s turned the color of peanut butter. Jelly wants to know what happened. Narwhal has a theory on why he’s suddenly so tiny. He tells Jelly, “When I woke up this morning I was the size of a peanut. I think it might have something to do with all the peanut butter I’ve been eating.” Jelly advises Narwhal to cool it on the peanut butter, and Narwhal agrees—not because he doesn’t want to eat it anymore, but because he’s eaten “all the peanut butter in the whole world wide waters!”

What’s Narwhal going to do about it, Jelly wonders. The answer is: Nothing! Narwhal’s fine with being so petite. But what about doing cannonballs, and his tutu and cape? Jelly asks. Jelly conjures up all kinds of disasters: Narwhal could get eaten or washed away on a wave or sucked into an elephant’s trunk. Narwhal tells Jelly to chillax. There’s a good side too. Regular waffles will seem gigantic and he’ll be able to eat as many as he wants.

A few of those huge waffles later Narwhal is enormous. Narwhal thinks this is just as great as being tiny because now he “can eat oodles of waffles” and “break the world record for waffle eating!” Which Jelly thinks is pretty ingenious—until he’s left to make thousands of waffles!

Narwhal and Jelly even tell kids about what some other sea creatures eat in section called Delicious Facts.

Ben Clanton’s Narwhal—excuse me, Peanut Butter—and Jelly make the most adorable odd couple in the early readers’ sea. In this third graphic-novel adventure, the dynamic duo give kids a taste of funny repartee between friends as Narwhal discovers a new fav food and tries on a new name and two new sizes. Clanton knows how to make readers giggle and laugh out loud as Narwhal guffaws at the idea foods other than waffles, Jelly grows more and more flabbergasted at Narwhal’s antics, and a rogue pickle with mismatched goggly eyes flails its spindly arms.

Sweet, zany, supportive, and charming, the combination of Narwhal and Jelly is always a delectable and eagerly anticipated treat for kids. Peanut Butter and Jelly is a must for all fans and a terrific addition to any home or classroom library.

Discover more about Ben Clanton, his books, and lots of other fun stuff on his website.

With just a few ingredients, you can make yourself a delicious lunch! Turns out PB & J and a glass of milk also makes a pretty fun game! Play this printable game for some peanuty perfect fun!

To Play the Game

For a More Difficult Game

To make the game a little harder, roll the die to fill your plate in this order: