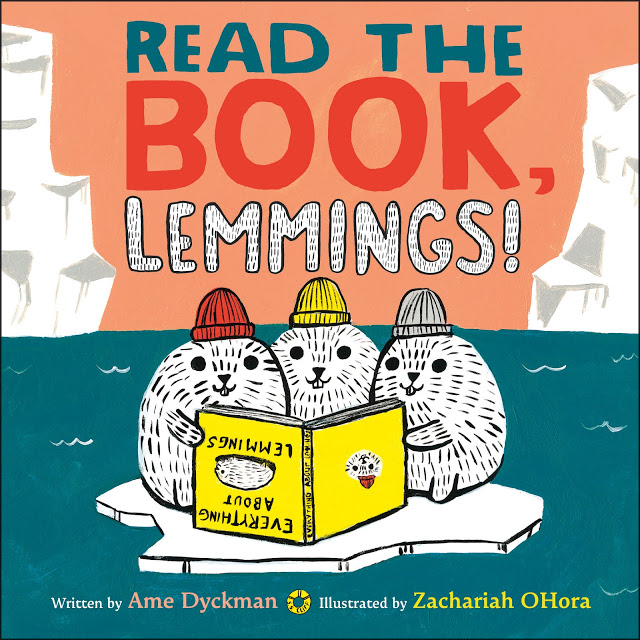 Sponsored by global non-profit LitWorld and Scholastic, World Read Aloud Day encourages reading aloud to children not only today but every day. Reading aloud to children from birth is one of the best ways to promote language development, improve literacy, and enjoy bonding time together. Millions of people celebrate today’s holiday all across the United States and in more than one hundred countries around the world. Special events are held in schools, libraries, bookstores, homes, and communities, and authors and illustrators hold readings and visit classrooms. To learn more about World Read Aloud Day  and to find stickers, bookmarks, posters, and a reading crown to decorate, visit LitWorld.

On the whale ship S. S. Cliff, first mate Foxy quietly reads a book about lemmings. “‘Huh!’ he said. ‘Says here, lemmings don’t jump off cliffs.’” But even though Foxy emphasizes the word “don’t” the lemmings sitting on the railing only hear the word “jump.” “‘Jump? I’ll jump!’ said a lemming. ‘Me too!’ said a second. ‘Ditto!’ said a third.” And with a long Geronamoooooo! the three lemmings jumped overboard.

Polar Bear Captain PB, engrossed in his newspaper, had just one thing to say. “‘Huh…I guess they didn’t read the book.’” Foxy looked over the side and heard the first lemming shout out “‘Wet! Very wet!’” “‘Me too!’ called the second. ‘Ditto!’ called the third” With a sigh, Foxy took Captain PB’s bucket (with a stern warning not to let the lemmings eat his fish) and hauled the lemmings out of the sea.

On deck, Foxy gave each lemming a name and a hat “so he could scold them properly.” The first jumper was, appropriately, named Jumper; the second was called Me Too; and the third was named Ditto. Foxy held up the book about lemmings and said, “‘Read the book, lemmings!’” The lemmings seemed surprised by what they saw, and Foxy was glad they understood. But did they? Not so much. As soon as Foxy mentioned the word “jump,” it was “Geronimoooo” all over again.

Captain PB was pretty sure they hadn’t read the book. “‘Help! I need help!’ called Jumper. ‘Me too!’ called Me Too. ‘Ditto!’ called Ditto.” Captain PB handed over his bucket with the now lemming-flavored fish, and Foxy once more retrieved Jumper, Me Too, and Ditto from the ocean. He gave them a harsh talking to and was just about to say the fateful word again when he stopped himself and told them to just read the book themselves. 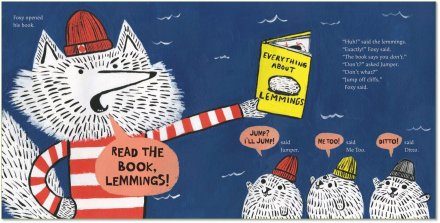 “‘Ahhhhh!’” said the lemmings as they went off with the book. Captain PB was impressed. “‘Good thing you didn’t say jump,’” he told Foxy. Six ears perked up, and….” Geronimooooo!” The three lemmings were sinking fast, so Foxy did what any good first mate would. “Cannonball!” he yelled as he dove into the water. Foxy rescued the lemmings and flopped back on deck.

For the rest of the day, Foxy practiced reading with the lemmings until they had it down: “Lemmings… don’t jump…off cliffs.” Foxy was satisfied and went back to reading his book. But the captain could not find his newspaper until…. The paper airplane zoomed by with three lemmings on board, shouting, “‘We fly!.’” 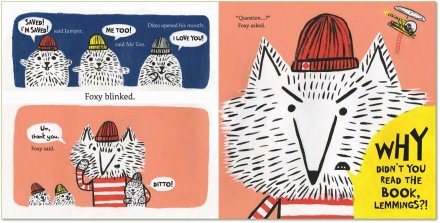 Ame Dyckman’s laugh-out-loud story is pure genius, filled with personality and characters that make Read the Book, Lemmings! a perfect book for dramatic and spirited read-aloud story times. The sweet, reactive lemmings offer plenty of hilarity and opportunities for kids to chime in, while Foxy and Captain PB are terrific foils for the frolicking lemmings and their foibles. The nod to literacy is given a light touch that is sure to resonate with young readers, and which in the end reveals a truth worth repeating: with the ability to read, anyone can soar.

Zachariah Ohora’s little balls of fluff are as adorable as they come. Who can fault them for having so much fun following their instincts as they jump overboard with a gusty “Geronimoooo!”? Clever details, such as a whale as a fishing trawler and the life ring sporting the name S. S. Cliff, are inspired. Readers will love the graphic novel elements that make it easy to follow the dialog and the expressive characters who, as Ditto reveals, love each other.

Read the Book, Lemmings! is highly recommended and would be an often-asked-for addition to home, classroom, and library shelves. The book would also make a much-appreciated gift.

Discover more about Ame Dyckman and her books on her website.

Learn more about Zachariah Ohora and his books and view a portfolio of his work on his website.

There’s really only one activity that is just right for today! So, why not make some hot chocolate or a chocolate chip mug cookie and settle in for a night of reading together? Here’s a recipe for a delicious mug cookie from geniuskitchen.com!

You can find Read the Book, Lemmings! at these booksellers