International Polar Bear Day was established as a day for people to learn more about these majestic animals and conservation efforts to protect them and their environment. You can celebrate by discovering ways to lessen global warming, which is believed to be a factor in the loss of polar bears’ natural habitats.

A baby polar bear listens to the voice that tells him to “Hush, little polar bear. Sleep in the snow, and dream of the places where sleeping bears go.” The adorable polar bear, with its eyes shut tight, then dreams of sailing the seas while riding on the back of a whale, following a crab onto the beach, wading through a meadow and chasing butterflies, bounding after cows in a field, and having adventure after adventure. But who is the little girl on a sailboat, hiding behind a sandcastle, near the tree, and always popping up where the polar bear explores?

At the end of the book as the polar bear drifts through a window, kids discover that the traveling polar bear has been heeding the wishes of that mysterious little girl. As the bear takes its place cuddled up beside the young sleeper, readers may wonder—who is really dreaming, the girl or the little polar bear?

Jeff Mack has created a warm, fuzzy lullaby of a picture book, perfect for bedtime or any snuggle time. The lyrical text invites listeners to float along in the polar bear’s wake as it romps, swings, crawls, and flies through each two-page spread that presents the bear’s and the little girl’s dreamscapes as vividly as the best remembered dreams.

Discover more about Jeff Mack and his books on his website! 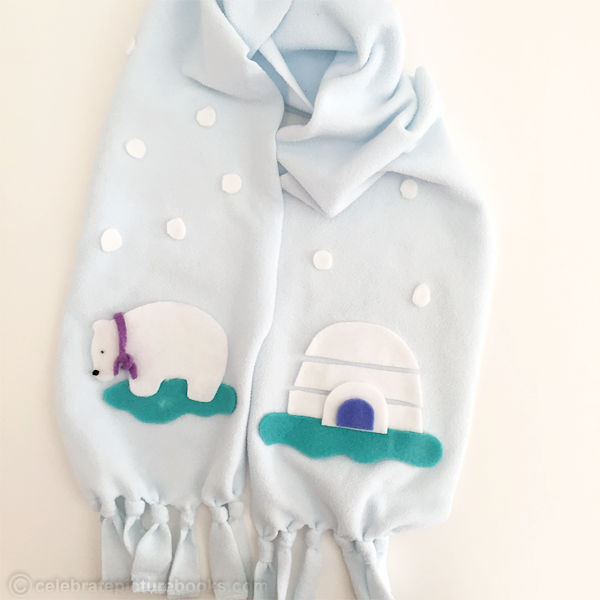 Polar bears aren’t cold in the winter—and neither should you be! Here are directions and printable templates for making a cute scarf to keep you warm, or—if you’d rather—a banner to warm up your room.

To make the fringe at each end of the scarf:

To make the pieces for the scarf or banner:

On one end of the scarf:

On the other end of the scarf: