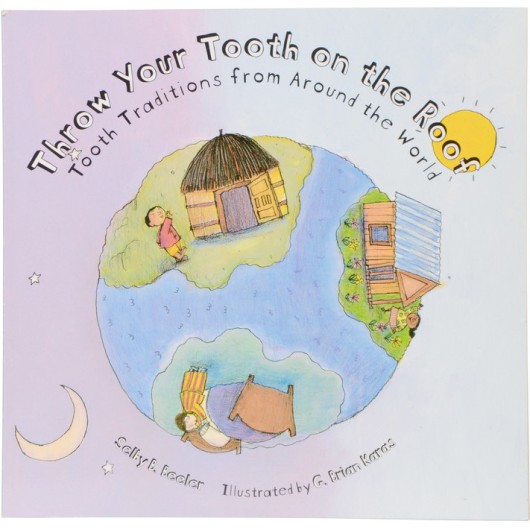 For hundreds of years losing baby teeth has conjured up stories, legends, and superstitions. The idea of paying for teeth may have come from the Vikings, who reportedly believed the teeth could make them better warriors and so paid their children for their teeth, which they fashioned into necklaces to wear in battle. Some people buried the teeth, wanting to hide them from witches and evil spirits. The first immaginary creature to actively search for and take teeth was perhaps a mouse, which is still taught in many countries today. From the mouse came the Tooth Fairy, who is one of those mysteries of childhood in America and other English-speaking lands.

Throw Your Tooth on the Roof: Tooth Traditions from Around the World

Written by Selby B. Beeler | Illustrated by G. Brian Karas

When children lose a tooth, it’s so exciting! They know it means they’re growing up. It also means they can participate in a tradition that is fanciful and fun. American kids put the tooth under their pillow, believing that while they sleep the Tooth Fairy will visit them, take the tooth, and leave them money. But what do kids in other countries do with their baby teeth?

In Throw Your Tooth on the Roof, Selby Beeler reveals traditions from 65 countries around the world. In many countries children are rewarded with money but the deliverer differs. El Ratón, a magic mouse, visits children in Mexico, Guatemala, Dominican Republic, Columbia, and other countries. A rabbit sneaks into homes in El Salvador, and in India, Korea, and Brazil birds take the tooth.

In some places what children do with their teeth doesn’t bring monetary riches, but the value of a beautiful smile. In Yellowknife Déné putting a lost tooth in a tree and dancing around it ensures that the new tooth grows in as straight as a tree. In many Asian countries upper teeth are placed in the ground and lower teeth are thrown on the roof in the belief that the new tooth will grow straight toward the old one.

Selby B. Beeler’s book offers children a fascinating way to learn about their counterparts in other countries through a common experience and rite of passage. Each description is accompanied by Brian Karas’ appealing illustrations of children in their native environment happily performing their tradition. 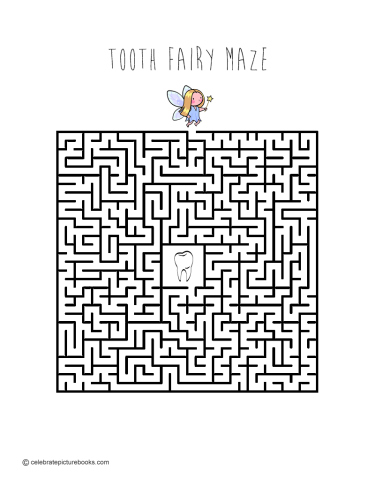 The Tooth Fairy has a job to do, but she doesn’t know which way to go! Can you show her the right path? Print out the Help the Tooth Fairy Find the Tooth Maze and lead her to the tooth! The Solution is included.