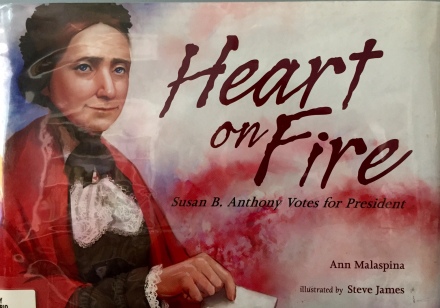 On February 15, 1820 in Adams, Massachusetts a girl was born who would grow up to set the world afire with her belief in women’s rights. Her name was Susan Brownell Anthony. An early feminist, her father believed it was as important for his five daughters to receive an education as for his two sons. After graduating from school, Susan Anthony became a teacher—at the age of 14—making $2.50 a week compared to the $10.00-per-week salary of the male teachers. Anthony later became active in the abolition and temperance movements. She recognized that the inability to vote limited women’s influence in these causes and began promoting women’s rights. She worked tirelessly to change the voting laws until her death on March 13, 1906 without seeing her greatest wish fulfilled. It was not until 1920, with the ratification of the 19th Amendment, that women were allowed to vote.

Susan B. Anthony has been honored for her dedication with commemorative stamps, and her portrait appears on the dollar coin. We also remember her work on behalf of all women on her birthday with memorial services at her gravesite in Rochester, NY and in Washington DC. Susan B. Anthony Day is a legal holiday in Florida, West Virginia, Wisconsin, New York and California.

Heart on Fire: Susan B. Anthony Votes for President

It’s November 1, 1872 and only four days until the presidential election. Everywhere people are being urged to register to vote. Knowing how important voting is, Susan B. Anthony races to the registration office with her sister and a friend in tow. The men in the office stare at her in confusion.

They know that women can’t vote—only men! What is Susan B. Anthony trying to do? But Anthony argues that the new 14thAmendment, which says “all persons born in the United States have the same rights as citizens,” gives women the right to vote. Some inspectors think she is right, some disagree. Finally they allow Anthony to sign the registration card.

On November 5, Voting Day, Anthony and 15 other women cast their ballots. Thirteen days later, however, a deputy federal marshal shows up at Anthony’s door with a warrant for her arrest. The charges? Voting illegally! The other women and the men who had allowed them to register and vote are also arrested.

In January word comes that unless Anthony pays a $1,000 fine, she will have to spend the time until her trial in prison. Anthony is adamant about not paying, but her lawyer sends the money. People in the country are split over whether she is right or not, but Anthony knows she’s right. Without being able to vote, women will have no voice in government.

She gives speeches, trying to rally people to her cause, and when her trial begins on June 17, 1873 the courtroom is packed. After Anthony’s lawyer and the prosecutor speak, the judge decides that Anthony has broken the law. He proclaims her guilty. When the judge asks if she has anything to say, Anthony answers, “You have trampled under foot every vital principle of our government. My natural rights, civil rights, political rights….” The judge stops her and does not allow her to continue speaking. He fines her $100, plus court costs. Susan B. Anthony refuses to pay, and she never did. 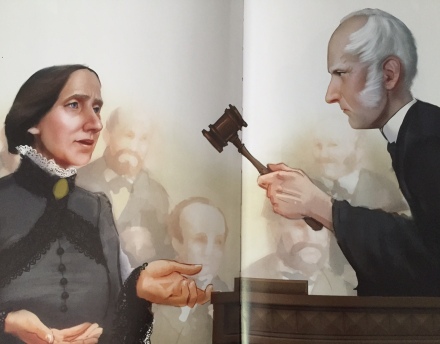 Through action, dialogue, and the metaphorical theme of fire, Ann Malaspina has written an exciting biography of Susan B. Anthony. Readers will understand and, more importantly, feel the opinions and determination that fueled Anthony’s crusade for women’s rights. The final pages follow the history of the women’s suffrage movement until the ratification of the 19th Amendment in 1920 and provide photographs from the time. The text of the 14th and 19th Amendments is also included.

Opening the pages of Heart on Fire is like walking into a city of the 1800s. The lush colors and intricate details of Steve James’ illustrations immediately immerse readers in the time and place of Susan B. Anthony’s world, depicting the reality of her struggles. This is a perfect book to share with children, especially in this election year when they can see how far women have come—from being denied the vote to running for president.

Learn more about Ann Malaspina and her books on her website!

View a gallery of illustration by Steve James on his website!

Vote For Me! Campaign Poster and Frame

If you were running for President, what would be important to you? Here’s a Vote For Me! Poster and Picture Frame to get your campaign started!