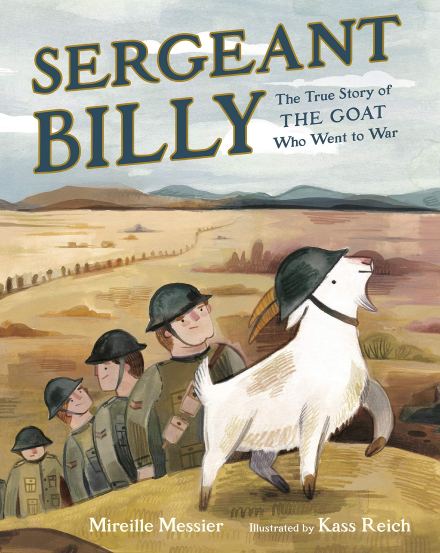 Veterans Day is observed each year on this date to honor and thank all members of the military who are currently serving or have served in the United States Armed Forces. The official ceremony begins at 11:00 a.m. with a wreath laying at the Tomb of the Unknowns at Arlington Cemetery and then continues inside the Memorial Amphitheater with a parade of colors by veterans’ organizations and comments by dignitaries. While an official government holiday, some schools remain in session, holding special ceremonies of their own and inviting veterans to relate their experiences.

Sergeant Billy: The True Story of the Goat Who Went to War

When a train full of soldiers stopped in a small town, they met a girl named Daisy and her goat, Billy. “The soldiers were going to war and they thought Billy would bring them luck.” Although Daisy loved her pet, she said they could take Billy with them if they promised to bring him back. During the bus ride to training camp for the Fifth Battalion, Billy endeared himself to the men with his antics, and they began calling him Private Billy. “And that’s how Billy joined the army.” 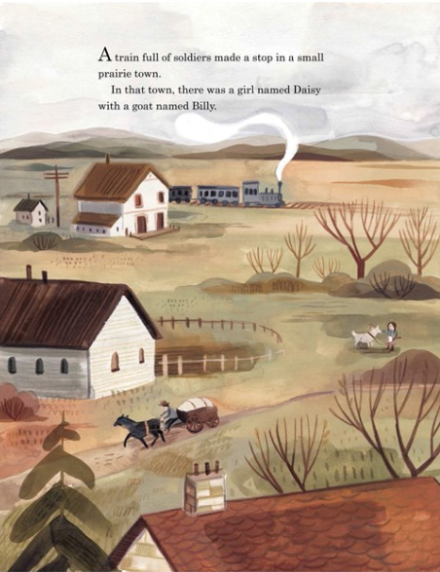 Billy trained with the soldiers and encouraged them with a push when they fell behind. When the soldiers were sent to England, they snuck Billy on board the ship. “And that’s how Private Billy crossed the ocean.” As time went on, the Fifth Battalion was sent to France. “Mascots were strictly forbidden at the front,” but the men hid Billy in an empty orange crate and “that’s how Private Billy went to the front lines.” Billy seemed to be the perfect solider. He didn’t mind the adverse conditions, the “foul food” or “even the rats.” 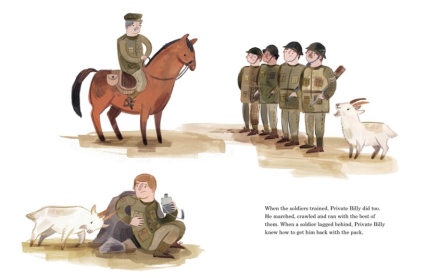 Billy celebrated victories and comforted soldiers during defeats and loneliness. The soldiers even wrote home about their beloved mascot. Even though food rations were short, Billy was happy with socks, napkins, or once even secret documents. For that misdeed, the colonel “placed the goat under arrest. And that’s how Private Billy went to jail for being a spy.” While Billy was locked up, the soldiers became bored, discontented, argumentative, and unhappy. So Billy received a pardon and was returned to the troops. 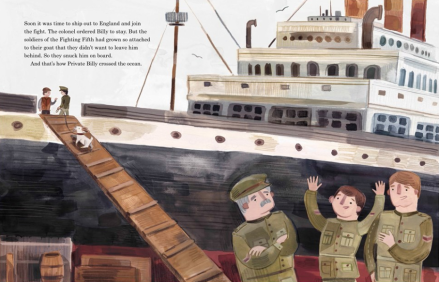 After many brave deeds, such as capturing an enemy guardsman and saving some “soldiers’ lives by head-butting them into a trench seconds before a shell exploded right where they had been standing,” private Billy was promoted to Sergeant Billy. Billy knew he could always count on the soldiers, and the soldiers knew they could always count on Billy. For his “exceptional bravery,” Billy was awarded the Mons Star. The war raged for years, but, finally, peace was declared. The soldiers—and Billy—were ready to return home. They traveled over land and across the ocean and brought Billy back to Daisy, just as they had promised.

An Author’s Note explains more about animal mascots and the way animals were used during WWI. Readers can see photographs of Billy, Daisy, and the soldiers he served with as well.

Mireille Messier’s charming storytelling brings to life the extraordinary World War I experience of a goat and the soldiers who loved him. Her easy-to-follow timeline, containing humorous incidents, clever ploys to move Billy from place to place, and harrowing exploits, will capture readers’ attention and hearts. Along the way, children learn about conditions and events of war. Messier’s repeated phrasing “And that’s how Billy…” moves the story forward while contributing to the cumulative effect of Billy’s positive influence on the troops and his role in battle.

Kass Reich’s captivating illustrations immerse readers in the wartime atmosphere while focusing on Billy and his endearing personality. Seeing Billy giving a tired soldier a nudge with his horns, being smuggled from place to place, comforting a soldier, and nibbling on secret documents allows children not only to visualize these events but to understand how important Billy was to the morale of the men, whose emotions are honestly depicted. Images of Billy happily wallowing in mud, playing with rats, and gobbling down anything he finds will have kids giggling while those of Billy saving lives and getting medals will wow them. His safe passage back home to Daisy is a delightful and satisfying ending.

A superbly told story, Sergeant Billy: The True Story of the Goat Who Went to War, is highly recommended. The book would make an excellent addition to home, classroom, and public library collections for general story times and especially those around Veteran’s Day, Memorial Day, and other patriotic holidays.

Discover more about Mireille Messier and her books on her website.

To learn more about Kass Reich, her books, and her art, visit her website. 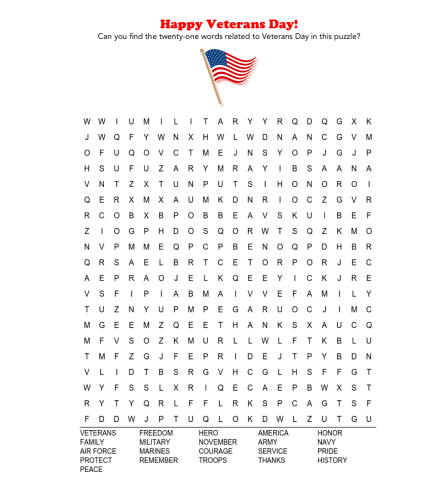 Can you find the twenty-one Veterans Day related words in this printable puzzle? 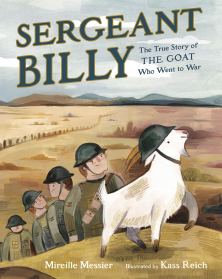 You can find Sergeant Billy: The True Story of the Goat Who Went to War at these booksellers