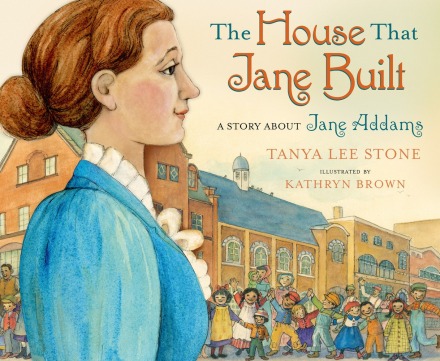 The House that Jane Built: A Story about Jane Addams

On a busy street stands a very special house where anyone is welcome and some find a home. In 1889 Jane Addams, a wealthy young woman, bought an elegant house in one of Chicago’s poorest neighborhoods. Why? At just six years old on a trip with her father, Jane “noticed that not everyone lived like her family did.” Right then she vowed that when she grew older, she would live in a poor community and “find a way to fix the world.”

Jane was brave and strong. Sometimes she and her stepbrother George would “sneak away at night to explore in nearby caves.” Jane was also smart and “read and read her father’s book collection,” which also served as the town library. Unlike most women at the time, Jane went to college. She attended Rockford Female Seminary and “graduated at the top of her class.”

After graduation, she didn’t know what she wanted to do, and when her father died that same summer, “Jane felt lost.” Two years later some friends invited her to travel to Europe with them. Although they went to the opera, museums, and many beautiful places, it was an experience in London that stuck with her. There she saw many “people in ragged clothes with outstretched hands, begging a cart vendor to buy his rotten fruits and vegetables that hadn’t sold at the market.” 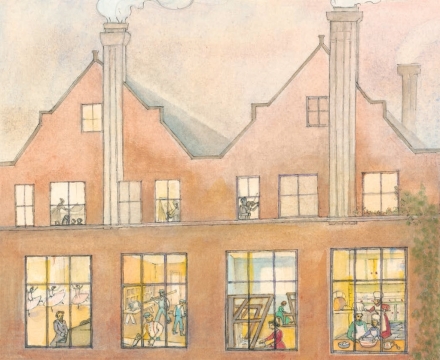 When Jane returned home, the question of how she could help nagged at her. She returned to London to learn about Toynbee Hall, where poor and wealthy people lived together and learned from each other. Here, skills, such as cooking, were taught to provide people with the education to find jobs. Toynbee Hall was called a settlement house, because the rich people who worked there lived there as well.

Jane now knew what she wanted to do. In 1889 Chicago was a diverse city with a large immigrant population. Many didn’t speak English, which made it hard for them to find jobs. “Large families were crammed into ramshackle houses with no running water.” Garbage lay in the street, and tough kids ran wild with nothing else to do.

Jane found a large house in the middle of one of these areas that had once belonged to Charles J. Hull and upon his death had been given to his cousin, Helen Culver.  When Helen discovered what Jane wanted to do, she donated the house for free. Jane left the house unlocked, letting people know that they could come there whenever they needed. In time, people did find their way to Hull House when they were hungry or out of work. Jane also had her own way of dealing with unruly children or those who didn’t understand her generosity. Once when a man broke into Hull House twice because he had no job and no money, Jane gave him a job.

Jane helped the neighborhood in other ways too. She built a public bath so that people could stay clean and avoid illness. She convinced “public officials to build more public baths.” Because children had nowhere to play, Jane convinced a neighbor to give her his unused lot near Hull House. She tore down the buildings and built Chicago’s first playground. For kids whose parents worked long hours, she started a morning kindergarten and after school clubs. She also began offering evening classes for children who worked during the day. 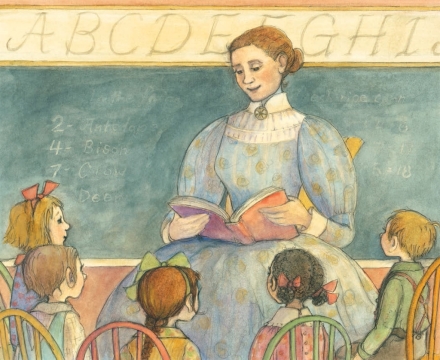 Jane had help with her endeavors. Her friend “Ellen Gates Starr was her partner from the start.” Many other people also helped. They moved into Hull House and “taught literature, art, English, math, science, and cooking.” Hull House continued to grow, and by 1907 Jane oversaw thirteen buildings, including “a gymnasium, coffee house, theater, music school, community kitchen, and an art gallery.”

By the early 1920’s more than 9,000 people visited Hull House every week. Jane’s work “changed a bad neighborhood into a great and strong community.” Today, you can still see Jane Addams’ commitment to others in the community centers that bring people together in nearly every city and town.

An Author’s Note with more information on Jane Addams follows the text. 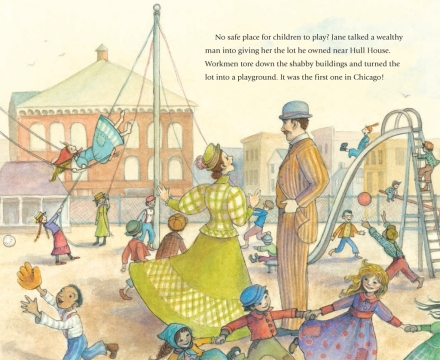 Tanya Lee Stone brings the story of Jane Addams’ work in Chicago to children in a compelling biography that gives readers a fully developed portrait of this most amazing woman. Stone’s active and evocative language puts children in the Hull House neighborhood, allowing them to get a feeling for and understanding of the issues of the time. Stone’s excellent examples of how Jane Addams responded to a variety of problems facing her community and even Hull House itself, demonstrate how generosity, empathy, and kindness can make positive changes in people’s lives. Depictions of Jane’s early compassion and commitment give children a sense that they too can make a difference in areas that are important to them.

Kathryn Brown’s riveting illustrations capture Jane’s early moments of concern for others, bravery, and study that informed her adult life; times of decision and cooperation that led to the establishment of Hull House; scenes of poverty, upheaval, and need that touched Jane’s heart; and images of her successes in Chicago that inspired others around the country. Brown’s softly hued watercolors are beautifully infused with realistic period details and honest emotion that provide readers with a strong foundation for understanding and appreciating the life of Jane Addams.

The House that Jane Built: A Story about Jane Addams is an inspiring choice for children with a philanthropic heart and to open discussions on how one person can make a difference. The book would be a welcome addition to home and classroom libraries.

To learn more about Tanya Lee Stone and her books, visit her website.

Jane Addams is an inspiration to all! Print this Jane Addams Coloring Page and hang it in your room or locker to inspire you to make a difference and be a positive influence in your community!