National Save a Tiger Month promotes awareness of the dangers facing the world’s wild tiger population. With only 4,000 still in existence, the tiger is threatened with extinction unless people work together to protect them. Many factors have led to the tiger’s decline, including habitat destruction, climate change, and poaching. Environmental and other groups, such as the World Wildlife Federation, the International Fund for Animal Welfare, and the Smithsonian Institution are working towards a solution.

Even before the story properly begins, Anya discovers something incredible and incredibly disturbing. Overnight she has grown a tiger tail—not a pony tail or pigtails, but an honest-to-goodness black-and-orange-striped tiger tail! All she wants is to stay in bed, but unfortunately that’s not possible because it’s Anya’s first day of school.

Anya wonders if “girls with tiger tails are even allowed to go to school” and what the other kids will say. Her mom thinks it’s wonderful. The tail goes so nicely with Anya’s red hair and brings out her “fun, wild side.” But Anya’s only worried about her back side! Her dad likens her predicament to when he got glasses and tells her she’s still “exactly the same wonderful Anya you’ve always been.”

Anya figures she’s on her own with her problem. She tries tugging on her tail, pulling on it, and squishing it, but it remains firmly attached. Perhaps the right outfit from her closet—or all of them together—could hide her tail, but that solution had its own problems. There was just one last thing to do—panic! “‘Calm down,’” says her mom. “‘You’ll make yourself sick.’” Ah-ha! There’s a good idea! Anya thinks as she goes back to bed with tissues and feeling for a fever. 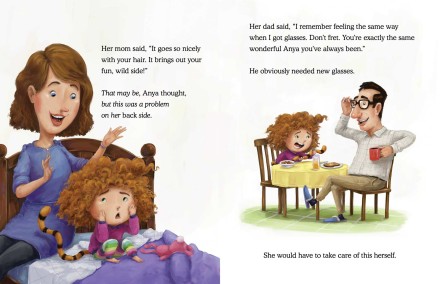 Anya’s mom thinks her antics are so funny and that the kids will love her sense of humor, then she shoos her off so she doesn’t miss the bus. Ah-ha! There’s another good idea! Anya hides in the bushes, but her dad discovers her and considers it a “special treat” to drive her to school.

Walking up the sidewalk to the school’s front door, Anya realizes that she has only one option—running away to join the circus. How bad could that be? But as Anya daydreams about eating popcorn for dinner and swinging from a trapeze, she misses her chance to escape. The school bus pulls up to the door and all the kids pile out. “Anya was doomed.” But she watches all the kids race past her without a glance and doesn’t see the boy headed straight for her who also doesn’t see her. CRASH! Their impact sends them tumbling to the ground amid fluttering papers and flying books, shoes, and backpacks. Even the boy’s baseball cap pops off! Anya stares and then smiles. Standing straight up from the boy’s head are two long rabbit ears.

“‘Hi, my name is Ben,’” the boy says as he holds out Anya’s shoe. “‘I’m Anya,’” Anya replies. Joe takes his hat from Anya and bounds up the steps. “‘Come on, Anya! We don’t want to be late on the first day.’” Anya follows, and when she sees her class she knows she’ll fit right in.

Mike Boldt whimsically captures the first-day jitters—of school or any new experience—that can result in an explosion of self-consciousness, doubt, and fear. Boldt’s little girl with a wild cloud of red hair is a loveable, plucky heroine as she takes matters into her own hands when the adults around her seem oblivious to her plight. Boldt’s vivacious illustrations burst with energy and emotion that kids will recognize and respond to. Boldt depicts children so honestly, from their crinkled nose abhorrence to their enthusiastic smiles, and the adults, with their clueless dialogue and quirky expressions, are rendered through a child’s eyes. 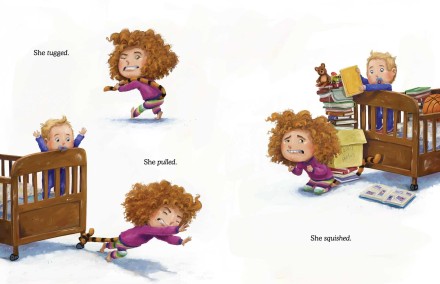 Readers will laugh at Anya’s panicked face and her multi-layered getup designed to hide the tail that is still obvious through its ribbon wrapping. The crash meeting between Anya and Ben provides delightful surprise and insight, and the final spread of the classroom is inspired. Not only do most of the kids have unique traits, but the teacher also displays rabbit teeth as everyone poses for a class picture.

A Tiger Tail (Or What Happened to Anya on Her First Day of School) offers comfort and understanding as it reminds readers that everyone is an individual, and that one of humankind’s strongest and most common bonds is our diversity. A Tiger Tail should be embraced by every classroom and will make an often-asked-for addition to any child’s library.

Learn more about Mike Boldt and his books and view a portfolio of his artwork on his website!

Pounce on this awesome book trailer for A Tiger Tail!

National Save a Tiger Month Activity

These two picture of tigers in the jungle have some differences—just like Anya and her classmates. Can you find all eleven changes? Have fun searching and coloring this printable Tricky Tigers Page!