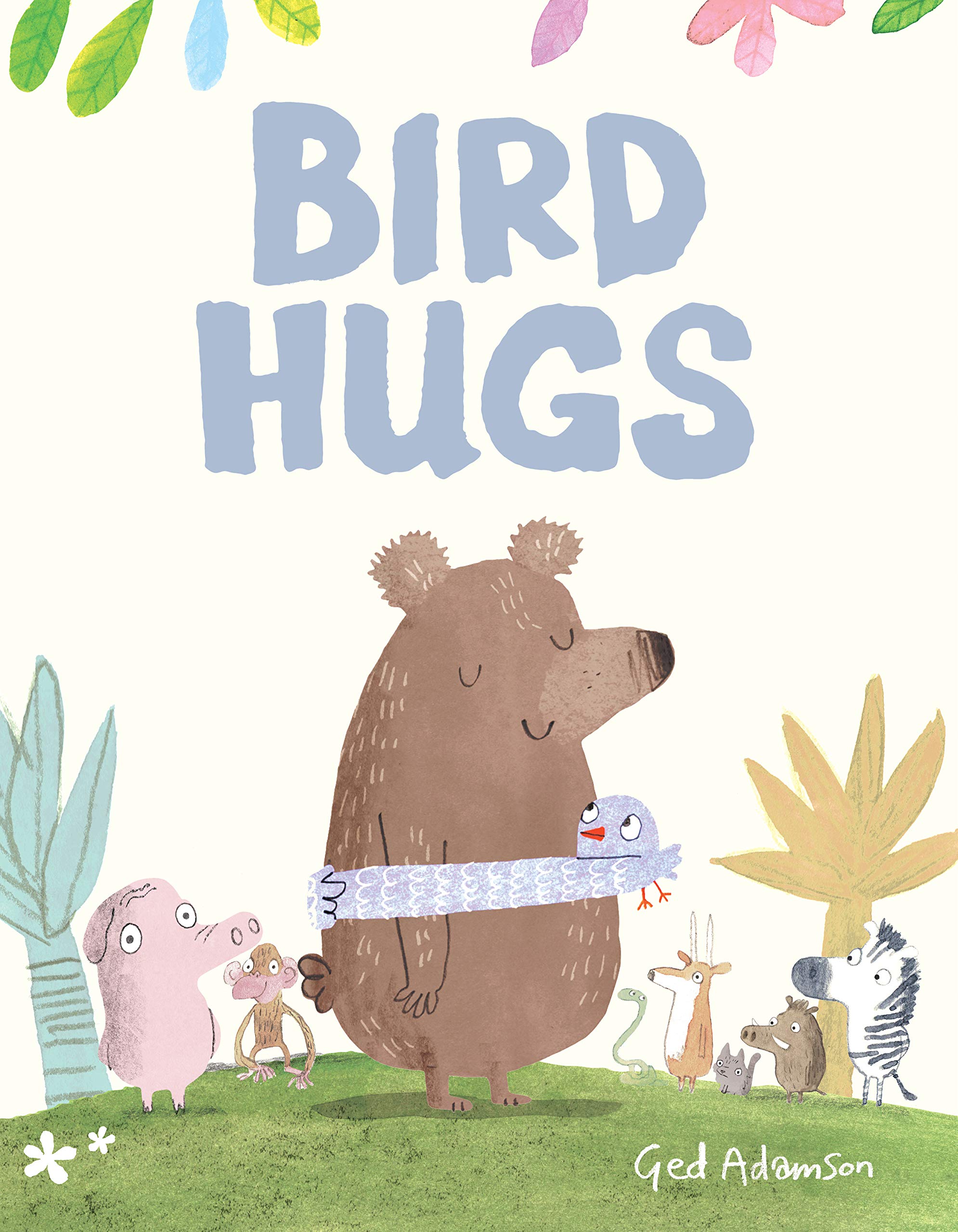 Instituted in 1998 by a coalition of nations, World Kindness Day is an international celebration that encourages people around the world to be mindful of others through mutual respect, inclusion, empathy, and gratitude. To celebrate, people are asked to perform acts of kindness—big or small. A simple “hi,” a smile, or an offer of help or support goes a long way in making the world a kinder and better place to live in. But don’t limit your care and concern to just one day. Promoters of the holiday hope that kindness becomes infectious, inspiring good relationships every day of the year.

Thanks to Two Lions for sending me a copy of Bird Hugs for review consideration. All opinions about the book are my own.

Bernard had a feature quite unlike other birds, but as a baby, he didn’t know there was anything different about his extremely long wings. He made them work for him: he pretended to be a sleeping bat, wrapping his wings around his body as he hung from a tree. And he chased after his friends, waving his wings spookily. But when his friends learned to fly, Bernard knew something was amiss. “No matter how many times he tried, it was something he couldn’t seem to do himself.” 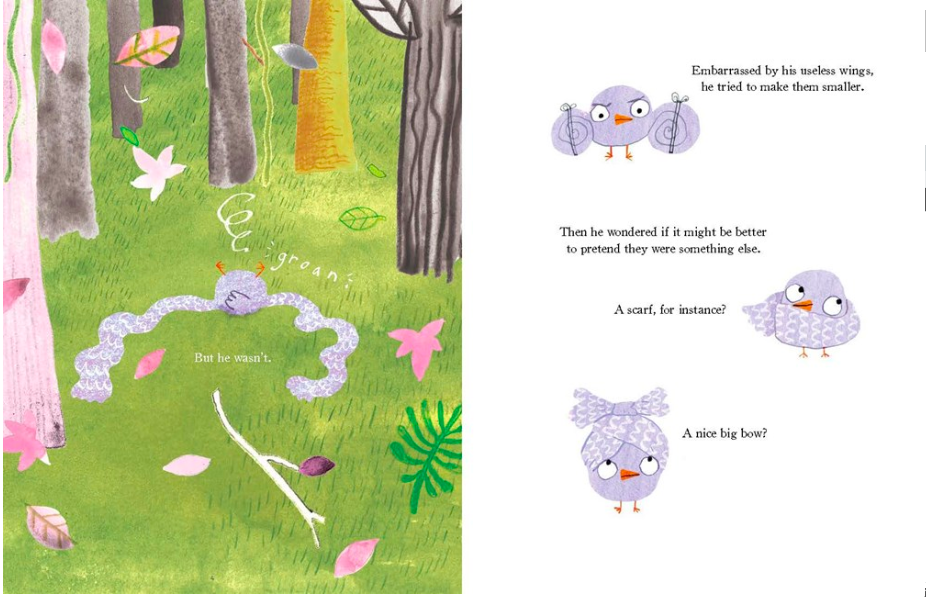 Soon all of his friends had flown away to other places. Longing to do the same, Bernard decided he just needed another approach. He had his friend Lawrence fling him into the air from a palm tree catapult. And for a glorious moment Bernard was flying. And then…he wasn’t. “Embarrassed by his useless wings, he tried to make them smaller.” He rolled them under and tied them up; he made them into a scarf, and he created a fancy headdress by tying them in a bow on the top of his head. But nothing worked.

“Bernard felt utterly sorry for himself.” He chose a branch where his wings could hang to the ground and “made it his home.” There he sat, day and night, all through the seasons feeling sorry for himself as the world went on around him. But one day he heard someone sobbing. Bernard left his branch to find out who was crying. He discovered an orangutan, who wailed, “‘I feel very sad and I’m not sure why!’”

In an instant Bernard had wrapped his long wings around the orangutan in a “BIG HUG.” In a bit the orangutan felt better and thanked Bernard. Bernard was happy too. He began to think that “maybe his wings were good for something after all.” And he was right. In the morning a long line of animals was waiting for him—all looking for a hug. Bernard was busy all day…and the next day…and the next. Besides wanting hugs, “the animals told Bernard their problems.”

All this hugging made Bernard happier too. His wings even felt stronger. He began to think maybe they were strong enough to fly. Bernard leaped from a cliff top and for a moment he was flying. And then…he wasn’t. But Bernard was philosophical: there was more to life than flying, he decided. And all the new friends he’d helped knew how they could help him. Taking him by the wings, they showed him that with a little support, anyone can soar. 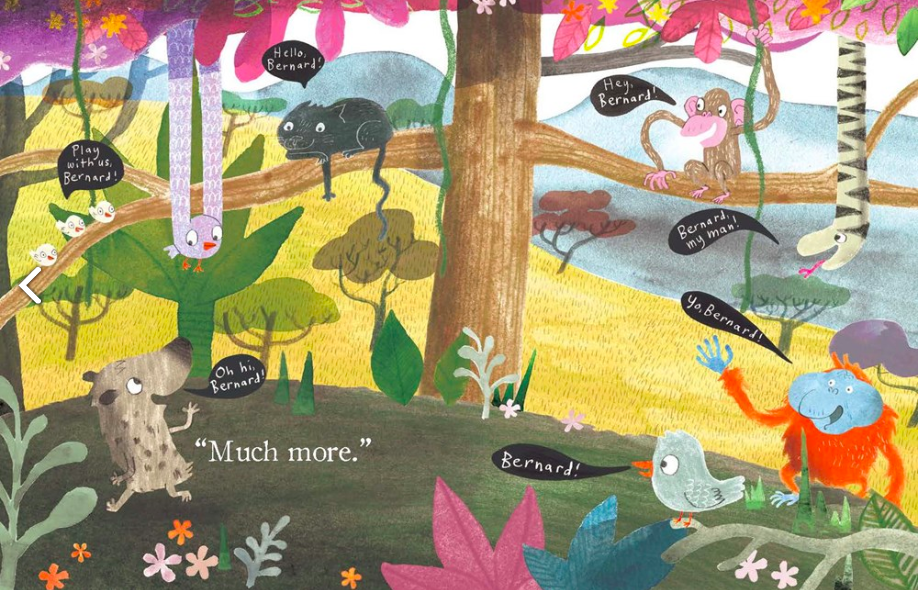 Trailing wings as long as a knitted winter scarf, little Bernard is an unforgettable cutie who only wants to be like all the other birds and fly. But is that his only talent? His only option? During Bernard’s year-long funk, it seems he finds the answers to these questions as his quick response to the orangutan’s sobs reveals, Bernard discovers that far from useless, his wings give him a gift more precious than flying––the opportunity to help his fellow animals. It’s a talent that brings him love in return. Readers can take comfort in and a lesson from Bernard’s hard-won but keen sense of empathy by embracing and using whatever makes them unique.

As in his other books, Adamson’s profound message is wrapped in images that combine kid-pleasing silliness, a bit of slapstick humor, and a diverse array of emotive characters. As Bernard mopes on his branch feeling lonely and sorry for himself, kids will notice that he’s not as alone as he might think. An anteater keeps him company on a rainy day, wide-awake nocturnal animals watch over him at night, and even the bees make room for him in their flight pattern. Bernard’s realization that life is filled with more than one might expect is welcome and heartening, and Adamson’s finale is wonderfully surprising and pitch perfect.

Bird Hugs is highly recommended for all kids and has multiple applications for story times at home, in classrooms, and for public libraries. The book would quickly become a favorite on any bookshelf.

To learn more about Ged Adamson, his books, and his art, visit his website.

Here are some cheery cards that are sure to make the recipient’s day happier! Give them to a friend, a family member, your teacher, or your bus driver to show them that you care and that they mean a lot to you!

You can find Bird Hugs at these booksellers