I’m always excited to join in on the book tour for a just-released picture book. There’s nothing like the sparkle in a child’s eyes when they discover a new favorite at the bookstore or library. Today, I’m happy to be featuring a book that will definitely bring on the giggles and have kids kicking up their heels!

Thanks to Blue Slip Media and Two Lions for sending me Super Rooster Saves the Day for review consideration. All opinions are my own.

Superheroes were Ralph the rooster’s…well…heroes, and he wanted to be just like them. He already had many of the prerequisites. He could make the sun rise (on nice days), he had a cape (one he shared with the farmer), he could fly (sort of), and “he could make himself invisible…if he pretended he was a weather vane.” But the other animals on the farm were skeptical. All except his best friend Rosie the pig.

There was one major problem. Life on the farm was pretty boring, and no superhero was ever needed. That is until one day when Ralph heard the chicken dance blasting from the radio. He immediately got to his feet with a “cheep-cheep-cheep! / flap-flap-flap! / wiggle-wiggle-wiggle, / and a clap-clap-clap!” Suddenly, he was surging with super powers that helped him leap off the barn roof and “‘fly faster than a speeding pullet.’”

He and Rosie were ready to be heroes. It didn’t take long for them to find a tree ablaze in yellow and orange. Ralph summoned his powers with a “cheep-cheep-cheep! / flap-flap-flap! / wiggle-wiggle-wiggle, / and a clap-clap-clap!” grabbed buckets of water and…helped that autumn tree grow? Next, they saw some confused geese flying south when they should have been flying north. It was going to be winter, after all. He leaped into the air and turned them around. It was only when he came back to earth that Ralph learned his mistake.

In search of another task, Ralph noticed large green balls falling from a tree. Once again he cheeped, flapped, wiggled, and clapped, and with a baseball bat sent those balls flying. But what would the squirrels do now that Ralph had sent their winter food far away? the animals asked. Ralph thought it was good that he’d “‘shared those walnuts with the hungry squirrels who live far away from here.’” All this saving-the-day stuff had left Ralph and Rosie hungry. They rushed over to the corn field only to find a flock of crows nibbling to their hearts’ content.

Ralph did his dance and “zoomed around the cornfield, but there were just too many crows to chase away.” The other animals realized that Ralph needed help. At Rosie’s urging, they all did the chicken dance. The crows were so “shocked to see the dancing animals” that Ralph had no trouble scaring them away. That night the animals celebrated Ralph’s awesome powers with a dance party in the barn while Ralph thanked his friends for their help—especially his sidekick, Rosie. 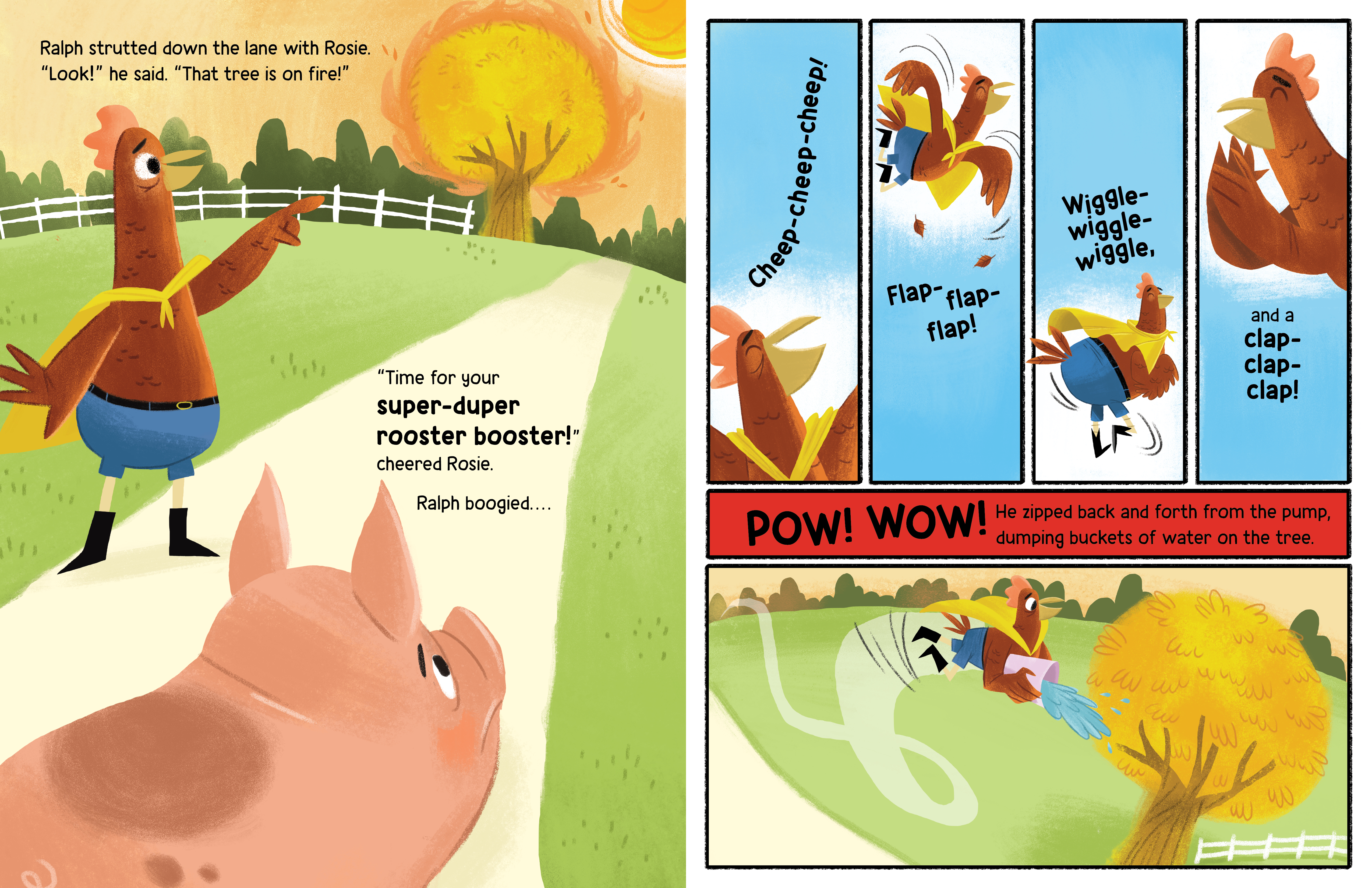 Maureen Wright’s super silly story is just the antidote for these indoor days. Full of puns and plays on superhero tropes, the story’s highlighted chicken dance—prefaced with a trippingly fun-to-say phrase—will have kids on their feet, cheeping, flapping, wiggling, and clapping during each rollicking read aloud. Ralph’s well-meaning rescues will have kids giggling as they, like Ralph’s farm-animal friends, will be in on the joke of each mistake from the beginning. The triumphant ending shows what true friendship is all about—and will spark a dance party with the whole family.

As Ralph the rooster finds his superpower muse in the chicken dance, kids will laugh out loud at Rob McClurkan’s depictions of Ralph wiggling his tail feathers in time with the music and instantly being zapped with “POW! WOW!” powers. As Ralph blithely goes about “saving the day,” the facial expressions and reactions of the other animals heightens the humor. Bold comic book-style panels accentuate each step of the chicken dance whenever Ralph calls upon his superpower, giving kids a bit more encouragement to join in.

A super fun book to share for boisterous, let-loose story times at home or during virtual or in-person read alouds, Super Rooster Saves the Day is a lighthearted story with lots of heart that would be a often-asked-for addition to home, school, and public library collections.

Rob McClurkan is the author and illustrator of Aw, Nuts! and Playdates Rule! and has also illustrated a number of books, including Tough Tug by Margaret Read MacDonald and Sloth to the Rescue by Leanne Shirtliffe. He grew up in Tennessee, where his grandparents’ farm, Saturday morning cartoons, and the Sunday funnies fueled his imagination. Now he lives with family near Atlanta, Georgia.

You can connect with Rob on

A long-handled wooden turner makes a super decoration for your room or kitchen—and a great partner for all of your chicken-dance fun! 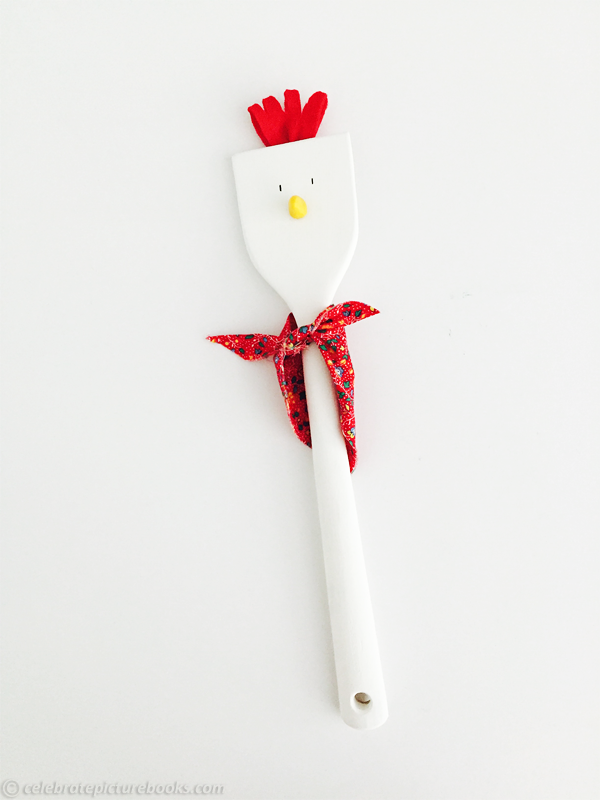 To make the comb

To make the scarf

To assemble the chicken

You can find Super Rooster Saves the Day at these booksellers