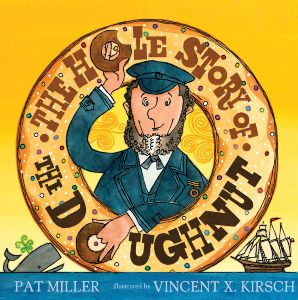 Today’s holiday celebrates all those ingenious kids who have improved the world with their inventions. This date was chosen to commemorate another child inventor—Benjamin Franklin—who designed the first swim fins when he was just 12 years old! (Seriously, is there nothing this man didn’t or couldn’t do?) With their supple minds and can-do attitudes, kids have changed the ways things are done in the fields of medicine, technology, communications, and even food—as today’s book shows! To learn more about the day and find resources for young inventors, visit the K.I.D website.

The Hole Story of the Doughnut

In 1844 at the tender age of 13, Hanson Gregory left the family farm and went to sea as a cabin boy on the schooner Isaac Achorn. He quickly became the cook’s assistant and also learned how to rig the sails and “steer a ship over trackless waves by sun and stars.” By the age of 19 Gregory had become the captain of the schooner Hardscrabble, and within a few more years was racing “his cargo from Maine to California as commander of a clipper, the fastest ship on any ocean.”

Hanson Gregory may have been one of the best captains to sail the seas—once awarded a medal for heroism for rescuing seven shipwrecked Spanish sailors even though his own ship and crew were endangered. But his greatest achievement was not attained because of his seafaring skills—it was his ingenuity in the galley that people remember.

On June 22, 1847 as a 16-year-old cook’s assistant, Hanson was rustling up the crew’s breakfast—coffee and fried cakes, the same as every morning. While the pot of lard bubbled on the stove, Gregory formed balls of sweetened dough and dropped them in. They sizzled and crisped—at least around the edges. The centers were raw, heavy with grease, and they dropped like cannonballs in the stomach. “Sailors called them Sinkers.” But this morning Gregory had an idea. He removed the lid from the pepper can and cut out the center of the balls. “Then he tossed the rings into the bubbling lard.”

The cook and the sailors took one look at this odd concoction and…ate them up! “The cakes were brown, and sweet, and fully cooked. Sighs of delight rose above the noisy sea. A new breakfast tradition was born.” Gregory told his mom about his invention, and she fried up large batches of these ‘holey cakes’ that became a sensation at a friend’s store and on the docks.

You might think this is a pretty interesting tale in itself, “but sailors like their stories bold” and so they “spun legends worthy of such a delicious treat.” One tale had Captain Gregory inventing the doughnut while he saved his ship from disaster. Another told how Gregory, distraught over the drowning of five sailors pulled to the ocean floor by their “sinker” breakfast, punched holes in every cake to make them look like life rings and vowed, “‘Never again!’”

Captain Gregory had a sense of humor about his accomplishment. During an interview he once stated that “he had invented ‘the first hole ever seen by mortal eyes.’” Gregory lived to be 89 and is buried “overlooking the sea where stormy weather can be spotted as readily as it once was from the quarterdeck of the Hardscrabble.”

An author’s note expanding on the story of Captain Gregory, the doughnut, doughnut shops, a timeline, and a selected bibliography follow the text. 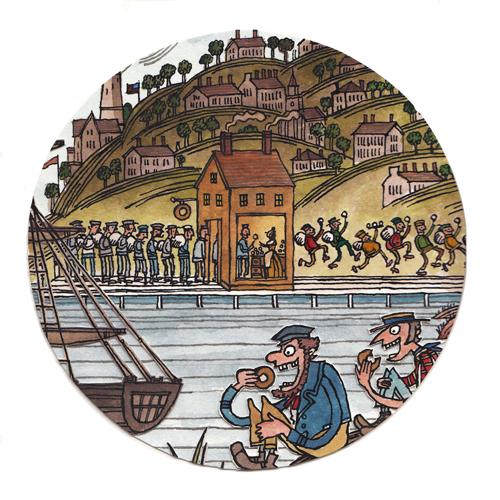 Doughnuts have never been so evocative! In Pat Miller’s humorous, informative history of this favorite pastry treat, readers can smell the salt air, feel the ocean swell and roll under their feet, and even ache a little for those poor sailors forced to eat “sinkers.” Seamlessly interwoven into this foodography is a fascinating look at the early days of sail. Miller’s language is immediately stirring: the Ivanhoe bucks and plunges, the sea becomes a monster, and Captain Gregory spears a sinker on the wheel spoke. Kids will marvel at a 13-year-old going off to sea and becoming an inventor at 16.

Vincent X. Kirsch provides just the right touch to this captivating true story with his cartoon-inspired watercolor and cut paper artwork. Ingeniously incorporating Hanson Gregory’s innovation of removing the center of the fried cakes, Kirsch’s illustrations are “cored” to allow for text, while the extracted section appears on the facing page as a glimpse through a porthole. The maritime atmosphere—from ship to shore—of the mid-1800s is beautifully represented in the folk-style sketches, and the humor that is so intrinsic to this story is wonderfully embraced.

The Hole Story of the Doughnut will delight foodies and history buffs alike and would make a fun gift and a delectable addition to personal libraries for all ages.

Vincent X. Kirsch’s website is full of illustrations from his books for children—take a look at his portfolio!

Spend some time with Pat Miller on her website that offers activities, tips, resources and many more books!

Are some of  your CDs a little passé? Not if you can turn them into cute décor like this doughnut hanging.