While there’s lots of magic going on today as little witches and wizards roam neighborhoods across the country casting spells and charming people to give them candy as part of Halloween, National Magic Day got it’s start in 1938 when a Chicago member of the Society of American Magicians sought official permission to honor the great Harry Houdini with a special day of recognition for his contributions to the world of magic. Houdini’s wife sanctioned the holiday and proclaimed October 31 – the date of his death in 1926 – as National Magic Day.

Tundra Books sent me a copy of The Magician’s Secret to check out. All opinions are my own.

When Mom and Dad dropped Charlie off at his grandfather’s for an overnight visit, they pleaded with him to make sure his grandson went to bed early. “‘No more hocus-pocus!’” his daughter said. That wasn’t just some phrase she conjured up, because her father had once been a magician and was still “like a big kid who never grew up.” He loved to play games with Charlie and “also knew the most amazing tricks.” But he never told Charlie his secrets.

What Charlie loved best were Grandpa’s stories. Whenever Grandpa told a story, he and Charlie went up to the “most cobwebby corner of the attic” where a big green trunk full of special things from Grandpa’s adventures sat. Grandpa would pull out an item and begin to talk. This night he showed Charlie an hourglass filled with sand that Grandpa said came from the tomb of King Tut.

Another time, he pulled out a scarf that had belonged to the World War I Red Baron fighter pilot. Grandpa had plucked it from the Red Baron’s neck during a dogfight in which Grandpa left the Baron and his plane floating in a French sea. One summer evening the story revolved around a coconut shell that he found on a tropical beach. He had fallen asleep under a palm tree only to be awakened by a roaring T-Rex intent on eating him. Just in the nick of time, “dozens of rocks rained down through the air, scaring the nasty dinosaur away.” Who had saved him? Grandpa never told, saying that was for Charlie to figure out. 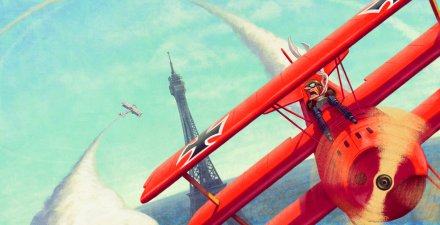 Charlie loved Grandpa’s stories, but his father said that they were just “things Grandpa’s made up.” Charlie couldn’t believe it. He felt like he “had lived every one of those adventures with Grandpa. How could they not be true?” When Charlie asked his grandfather about it, Grandpa sighed. He said the problem with grown-ups was that they didn’t “have faith in make-believe” but that if you “use your imagination, you can turn a dream into something real.”

Charlie wasn’t so sure, but Grandpa assured him: “‘We’ve done it over and over again, with cameras and computers, automobiles and airplanes…. Magic is all around us, kiddo—in me and in you.’” Then Grandpa waved his hands in the air and produced a…rock. He said it was the philosopher’s stone that could do magical things, but the secret was that “‘You have to see it, you have to believe it.’” That night Charlie fell into a deep sleep with the rock under his pillow. When he woke up, he heard an earth-shattering roar. He looked and saw a T-Rex threatening his grandpa. He looked at the rock in his hand and knew what to do….

Zachary Hyman makes magic with traditional storytelling combined with the wonder of imagination and the encouragement to make dreams come true. As Grandpa talks about his daring feats, Charlie believes him, but more importantly, Charlie believes that he could do such marvelous things too. Hyman’s reminder that all great discoveries and achievements began as someone’s seemingly impossible idea is well aimed at his young audience whose boundless imaginations may just be our next realities. Hyman’s evocative language and conversational tone  will keep children enthralled until the surprise ending.

Joe Bluhm lends a mysterious enchantment to Hyman’s story with his atmospheric depictions of the cobwebby attic, darkened, creature-infested tomb, and twilit skies. Turning from the setup to the heart of Grandpa’s stories, readers are immersed in vibrant colors and dazzling light, representative of that flash of ingenuity or creativity in each of us. In a nice cyclical set of images, Charlie is first seen watching TV and playing aviator, spaceman, explorer, artists, and magician with Grandpa in sepia-toned snapshots. Near the end of the book when Grandpa talks about the power of imagination, these same scenes are presented in full color with Charlie as a pilot, astronaut, movie director, mountain climber, race car driver, and explorer.

Like the best magic trick, The Magician’s Secret will captivate readers but will also tell them what they really want to know: the answer to how they can do wondrous things themselves. The book would make a terrific addition to home, classroom, and school libraries.

To learn more about Joe Bluhm, his books, and his art, visit his website.

It’s no secret that you’ll love this The Magician’s Secret book trailer!

Help the spell flow to the top hat to make the magic work in this printable maze! 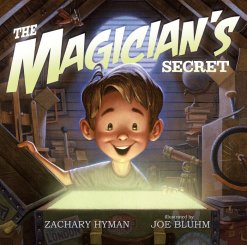 You can find The Magician’s Secret at these booksellers