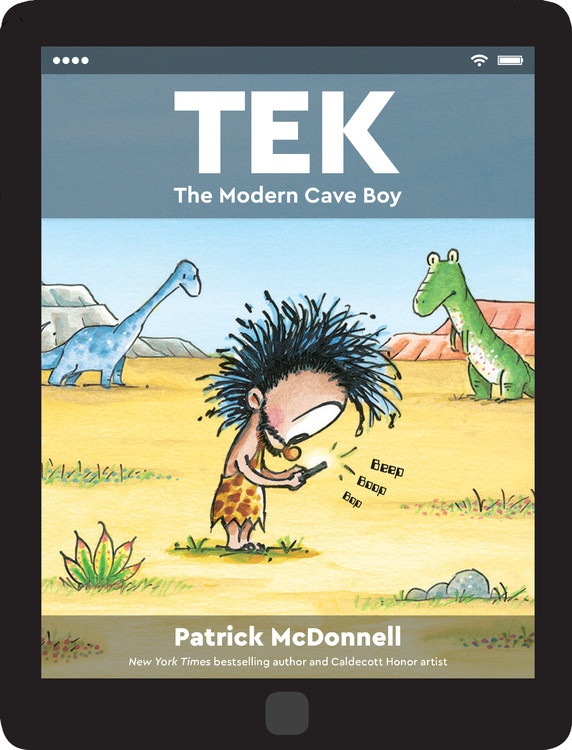 In 2010 the website Mashable established a special day to celebrate the popularity of social media. Since then social media has become even more a part of our lives. It’s great keeping up with friends, learning what’s happening in the news,watching silly videos, and making your opinions known. While unplugging often and living in the “real world” provides balance and a chance to relax, social media has changed the way we connect and interact with others all around the world—and that is something to celebrate. If you limit your time online, I appreciate your spending some of it with me!

There once was a Troglodyte cave boy named Tek. Well…actually, this might have happened yesterday. Tek was a normal cave kid except he never wanted to leave his cave. Even when his friend Larry the T-rex came by wanting to play, he stayed inside “glued to his phone, his tablet, and his game box.” At night the light of the stars was dwarfed by the “eerie glow” coming from Tek’s cave. His mom was mad at his dad for ever inventing the Internet. 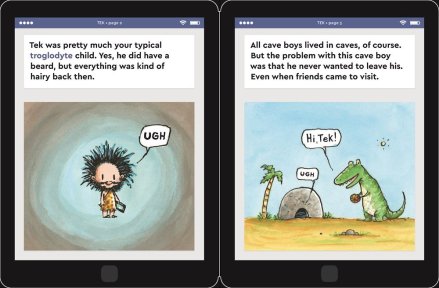 “Outside, the real world was evolving, but Tek couldn’t have cared less.” During the ice-age? Tek missed all the winter fun. Dinosaurs? Tek only knew them as “Watchamacallitasaurus,” “Hoozdatasaurus,” and “Idontgiveadactyl.” Time was going by, and even Tek’s Larry, whose brain was “the size of a walnut” knew something had to be done.

Tek’s parents tried everything they knew to pull him away from his gadgets. “‘I need to light a fire under that boy’s butt,’ grumbled Tek’s dad. ‘Except I haven’t invented fire yet.’” Even the higher-ups in the tribe tried to get through to Tek, but he paid them no notice. Not even “Dora Duddly and her dinosaurs for a better tomorrow” could talk sense into Tek. But then Big Poppa, the village volcano, had a blast of an idea. 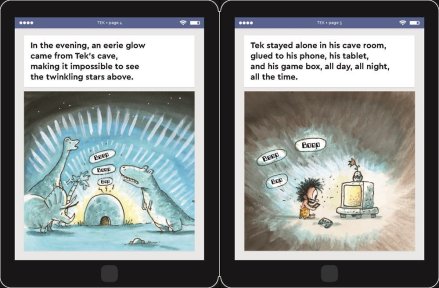 “The eruption shot Tek and his phone, tablet, and game box out of his cave and into the sky.” When he crashed down to Earth he was “totally disconnected.” Upon opening his eyes, Tek wondered at the fresh smells, the warm sun, the bugs and flowers, the hairy elephant, and the hairy people. He thought the world was “‘Sweet!’” Tek rushed to find Larry and on the way stopped to kiss his happy mom and dad. He used some fancy footwork atop a round stone to wheel himself to Larry. Larry was thrilled to see him. The two spent all day playing with their friends, and that night they looked into the dark sky, imagining ways to “reach for the stars.” 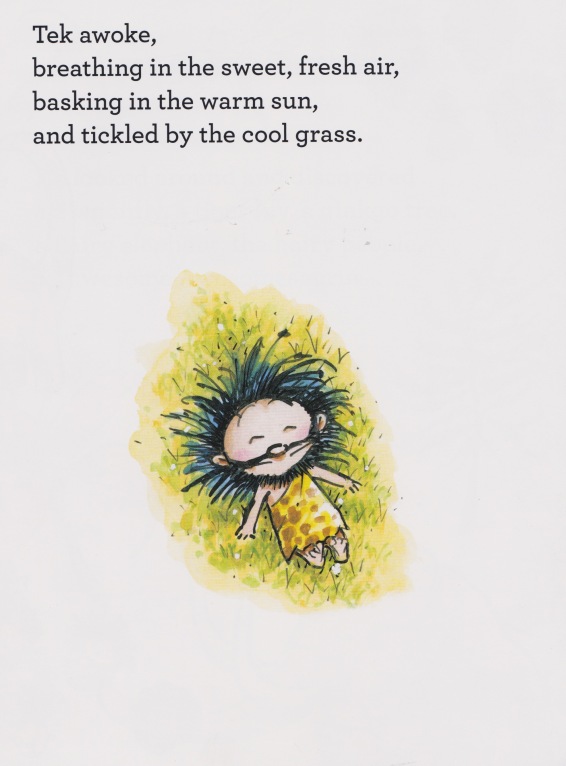 On every level Patrick McDonnell’s Tek: The Modern Cave Boy is a delight. If you love wordplay, it starts on page one…no, before that—on the cover—with riffs on technology, kids TV, dinosaurs, and more. If you like time shifting, you’ll relish the prehistoric/modern mashup, and if you’re partial to laugh-out-loud illustration, you’ll want to get an eyeful of little Tek, full beard and all. This is one book that adults and kids will giggle over together even as it humorously pokes fun at our penchant for gadgets. Even the book itself is in on the joke, with a size and shape any tablet user well knows. The board book-thick covers give way to paper pages, reinforcing the idea of leaving technology behind to enjoy the outside world.

Tek: The Modern Cave Boy will quickly become an often-read favorite for both kids and adults and would make a welcome addition to home bookshelves.

Discover more about Patrick McDonnell and his books on his website! 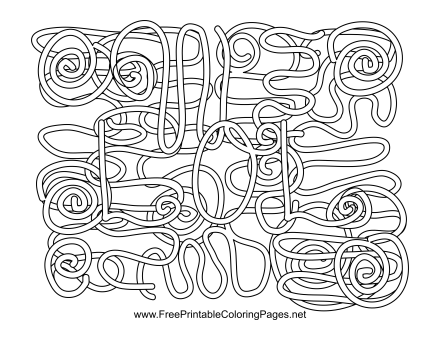 Social media has a vocabulary all it’s own! Can you find the hidden texting abbreviations in these printable coloring pages?