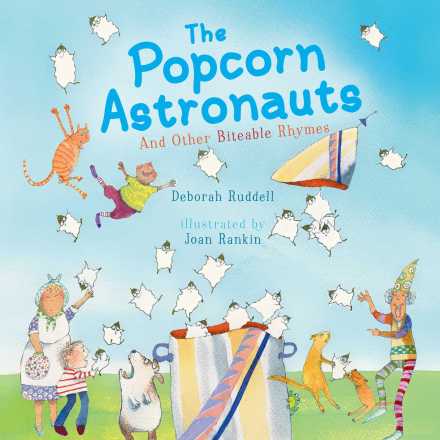 National Popcorn Poppin’ Month has been celebrated in October for more than 30 years and was made official in 1999 by then Secretary of Agriculture Dan Glickman. With its salty crunchiness and that enticing Pop Pop Pop rhythm, this snack is a favorite the world over. Its history goes back to the Aztecs and beyond. Early explorers of the 1500s wrote about native peoples roasting corn until it popped and described it as looking like a “white flower.” It was eaten and also strung for decoration.

Most people now eat popcorn with salt and butter, but can you imagine having it with milk? Way before Corn Flakes and Cheerios came on the scene people ate popcorn as cereal! And popcorn really became popular during the Great Depression, when it was one of the only treats people could afford. Why not pop up a batch and  read today’s reviewed  picture book. For more interesting popcorn facts and recipes visit www.popcorn.org.

The Popcorn Astronauts and Other Biteable Rhymes

Each season has its much-anticipated delicacies and each food its particular fans. Winter offers hot drinks and cinnamony goodies; Spring ushers in fresh, juicy fruit; Summer requires icy-cold, refreshing treats; and Autumn settles in with warm, comforting meals and snacks. Year-round there are foods to delight the tummy and—in this fun collection of poems—the imagination. So let’s snuggle up on the couch and welcome The Arrival of the Popcorn Astronauts:

“The daring popcorn astronauts / are brave beyond compare— / they scramble into puffy suits / and hurtle through the air. / And when they land, we say hooray / and crowd around the spot / to salt the little astronauts / and eat them while they’re hot.”

Or perhaps those universally loved “Dazzlers of the Dinner Plate” and “Lunchroom Legends” that get their own tribute in Stand and Cheer for MAC and CHEESE! is just what you have in mind. When Winter drapes its icy blanket over the world, a special kind of steaming hot chocolate can always be found at The Cocoa Cabana where “On an ice-skating pond in the state of Montana, / there’s a little red tent called the Cocoa Cabana. Calling all skaters, the big and the small! / Marshmallow Peppermint Cocoa for all!” 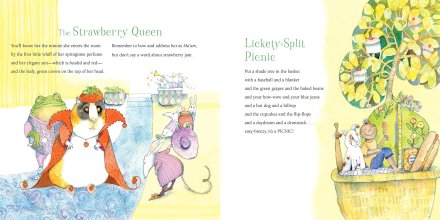 Spring invites The Strawberry Queen and “You’ll know her the minute she enters the room / by the first little whiff of her spring time perfume / and her elegant suit—which is beaded and red— / and the leafy green crown on the top of her head. / Remember to bow and address her as Ma’am, but don’t say a word about strawberry jam.”

Thirsty? Then perhaps you would like A Smoothie Supreme with its very distinctive ingredients: “A whisper of pickle / is what I detect. / with glimmers of turnip / I didn’t expect”… “The mudpuddle splashes / are really delish, / and the finishing touch is that nubbin of fish!” Or maybe you’d like to learn How a Poet Orders a Shake, which goes in part: “‘A frosty cup of moonlight, please,’ / the poet murmurs, low. ‘As mushy as a mittenful / of slightly melted snow…’” 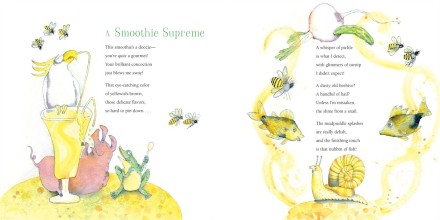 Imaginative verses also transform a slice of watermelon into a lake complete with “a little fleet of small black boats”, introduce peaches with their “…sunset of beautiful colors / on the flannelpajamaty skin”, follow the Voyage of the Great Baked Potato Canoes that “…oozed with steam and sour cream. / They were loaded with bacon and chives. / But silverware was everywhere— / and they barely escaped with their lives”, and wonder about who will eat The Last Brownie, which is “As hard and square and rugged as a brownie made of stone.” 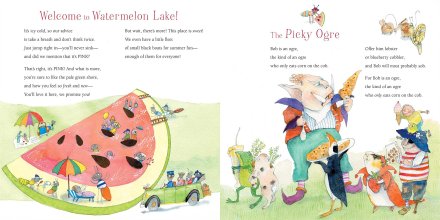 Deborah Ruddell has included so many more wonderfully delicious, fresh, and surprising poems with clever takes on the foods that flavor our days. The rhymes flow with a sweet, easy rhythm and are as fun to say as they are to hear.

Joan Rankin’s vivid watercolor illustrations bring each poem to life with adorable characters, humorous details, and plenty of action. Her “healthy” gingerbread house set among a broccoli forest is a beautiful departure from the well-known original, a dapper Dracula swoops down on an unsuspecting sleeper, a mouse wields an axe over a crusty brownie, and impressionistic trees hold ripe apples. Kids will love lingering over the pages as they listen to each poem to capture every nuance.

The Popcorn Astronauts and Other Biteable Rhymes makes a fun take-along book for picnics, trips to the farmers market or orchard, and playground—or anywhere that a quick nibble of food would taste better with a “Biteable Rhyme.”

Discover more books by Deborah Ruddell plus fun activity guides on her website! 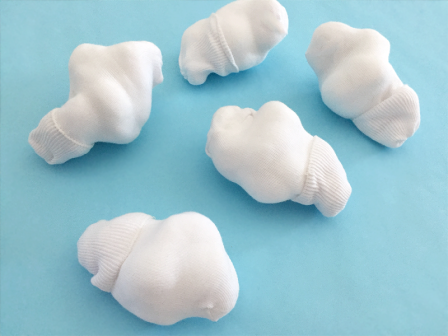 The popcorn is flying! Can you catch it? This is a fun game to celebrate this most delicious month! And if you keep the popcorn socks, it will make a great quick activity for those times when you want to get up and move but just don’t know what to do.