Founded in 1992 by a woman who rescued a sheep from wooly circumstances, Hug a Sheep Day gives us time to appreciate the warmth and comfort these animals provide through their soft fleece. As winter approaches in many parts of the world, many of us would be lost and cold without our favorite wool sweaters. If you want to take full advantage of today’s celebration, find a farm or petting zoo where you can give a sheep or lamb a hug.

Six sheep just hanging out on Halloween night decided to go trick-or-treating. This spur-of-the-moment idea doesn’t leave them much time for elaborate costumes, so they cut holes in sheets and toss them over their heads. Then with pumpkin buckets in hoof and “on little sheep feet,” the “six creepy sheep went a-haunting UNTIL…they passed a passel of pirates, and one creepy sheep turned tail with a shriek.”

Five creepy sheep continue their haunting UNTIL…a flock of fairies crosses their path, sending one sheep running with a shriek. Down to four, the creepy sheep bravely head down the path again UNTIL…a herd of hobos happen by, “and one creepy sheep turned tail with a shriek.” Three bold sheep “on little sheep feet” tip toe through the forest UNTIL… “they glimpsed a gaggle of goblins” that sends one shrieking on its way.

Now two creepy sheep, more courageous than the others, hurry on as spooky trees wave and the wind howls UNTIL… “they whisked by a warren of witches” which is just too much for one of the sheep and it…well, you know! Under the bright full moon the last creepy sheep has come to the old barn that was the group’s final destination. Jack-o’-lanterns light the doorway, and the windows glow. The fearless ghostly sheep calls out, “Sheep trick or treat.”  Then the farmer swings open the door to a barnyard Halloween party with music, pumpkin pie, apple cider…and all the sheep’s friends!

When the holiday is “Hug a Sheep Day” to celebrate those sweet, gentle animals that say Baaaa instead of Booo, but the specter of Halloween is everywhere, what’s a reviewer to do? The classic Six Creepy Sheep is the perfect solution! Judith Ross Enderle and Stephanie Jacob Gordon created a concept book that will keep little readers on their little feet as they count down the flock of sheep that go “a-haunting” on Halloween night. Alliterative verses introduce the other trick-or-treaters who so frighten the sheep that their numbers dwindle with each page. The repetitive phrasing makes Six Creepy Sheep a fun read-along, and the inclusive ending will charm kids.

John O’Brien’s pen and ink and watercolor illustrations are just spooky enough to create a slightly shivery story time for young readers. Kids will giggle at the orange-fleeced sheep wearing ghost costumes and walking on two legs. The site of the sheep fleeing in fright will also delight little ones as they pluck up their courage and proudly know that they would never be afraid of the pirates, fairies, hobos, goblins, and witches the sheep encounter. The forest, rendered in muted shades of purple, green, blue, and orange, is populated with trees that appear eerily alive and add to the Halloween atmosphere.

More readily available at libraries and with used booksellers, Six Creepy Sheep is a cute addition to your Halloween reading list.

To learn more about John O’Brien and his artwork for children’s books, The New Yorker, and other publications, visit his website! 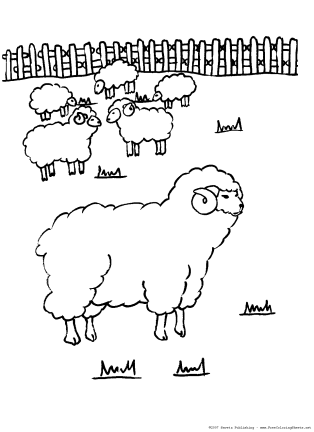 Sheep on a Farm Coloring Page

With their fluffy wool and sweet Baaaa, sheep are a favorite of kids and adults.Enjoy this printable Sheep on a Farm Coloring Page.