What could be more satisfying during a cool autumn month than a spicy bowl of chili?  Whether made with meat or veggies, combined with macaroni, or served in potato skins, the simmered flavors make for a scrumptious meal. Although the origins of chili are lost to history, it’s believed that the dish is a southwestern, specifically Texan, concoction. It began to attract attention in the early 1800s, and by the 1880s”Chili Queens” were selling “bowls o’red” at chili stands throughout San Antonio. In 1893 the San Antonio Chili Stand made an appearance at the Chicago World’s Fair. It’s popularity took off across Texas and throughout the west by the 1920s. When the Great Depression hit, chili became one of the only affordable meals for the hungry population. Today chili is a favorite dish of people all over the world. To celebrate this month’s observation why not whip up a batch of your favorite chili or discover some new recipes!

Written by Helen Ketteman | Illustrated by Will Terry

What a hoot! The knee-slappin’, root-a-tootin’ phrasing in Hellen Ketteman’s Armadilly Chili is shor ‘nuf gonna make this a favorite on any child’s bookshelf. While the plot may be familiar, the southwest setting and Miss Billie Armadilly put a fresh, funny twist on it.

“Miss Billie Armadilly skit-skat-skittered down the lane. A blue-norther’s a-blowin’ and my old, cold bones are rattling for a pot of hot armadilly chili,” she says. She’s gathering ingredients when her friend Tex, a many eyed tarantula, tip taps by. Hey, Tex, she calls, how about tapping your toes this way and helping me gather a boxful of beetles?” But Tex just “wiggles his long jiggly legs and says, ‘Shucks, Miss Billie, I’m going dancing today.’” Miss Billie harrumphs and collects the beetles herself.

Next Miss Billie is picking peppers, and when Mackie the bluebird flies in she thinks she has an assistant. “‘How ‘bout whistlin’ up a tune and helping me pick a peck o’ peppers for my armadilly chili?’” Once again, though, she’s left on her own since Mackie says he is “‘shakin’ my tail feathers to the movies.’” When Miss Billie “scurries to the prickly pear cactus and begins chippity-chop-chopin,’” her friend Taffy, the horned toad, complains about the noise and then begs off from helping, saying she’s got plans to go skating.

At home, Miss Billie stirs her chili to a scrumptious bubble. The aroma entices first Tex, then Mackie, and finally Taffy to come a’knockin’ at her door looking for a bowlful, but Billie has something to say about that—specifically, “no workin’ with Billie, no sharin’ the chili!”

Billie’s friends hurry away sorry that she feels that way, and Billie sits down to her feast. But after all that work, the chili tastes as “flat as a Texas prairie.” What’s wrong? She realizes what the missing ingredient is just as the doorbell rings. She opens the door to find her friends standing there with bags in their hands. What’s in those sacks? Apologies! As well as hot apple cider, jalapeno biscuits, and homemade chocolate fudge. Now that the friends are all together, the chili tastes just right, and “they talked and laughed into the cold, blustery night.” 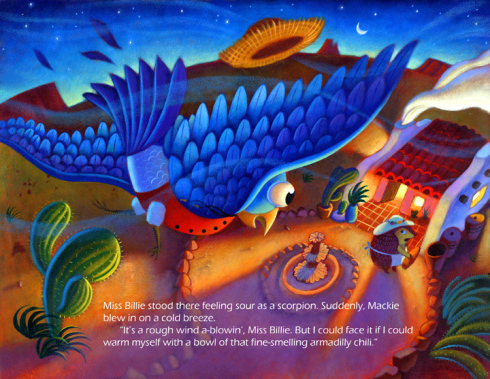 What a hoot! Helen Ketteman’s fast-paced Armadilly Chili is a spicy take on the little red hen story  and what it means to be a good friend. Miss Billie is a sassy, no-nonsense heroine who values her work and talents and makes sure others do too. When anger and frustration bubble over, however, the four friends find a way to apologize and make up. The lesson, humorously conveyed as well as Ketteman’s knee-slappin’, root-a-tootin’ phrasing is shor ‘nuf gonna make this a favorite on any child’s bookshelf.

Will Terry’s vivid illustrations washed with a palette of deep reds, oranges, greens, and yellows bring the Southwest setting to life. Miss Billie and her friends are enchanting versions of their natural counterparts, and kids will love the environmental and homey details on each page, where even the cacti display personalities. Billie’s facial expressions as each of her friends abandon her to her chores are priceless, and their final camaraderie is highly satisfying.

Discover more about Helen Kellerman and her books plus fun accompanying activities on her website!

View a portfolio of Will Terry‘s books and artwork on his website!

While I take a few personal days, I am reposting earlier reviews updated with new links and interior art.

Chili just isn’t chili without a little heat! But can you take 15 chili peppers in your bowl? If you want to win the Hot, Hot, Hot! Chili Pepper Chili Game you’ll have to!

Object of the Game

The object of the game is to collect 15 chili peppers in your bowl before any other player.

8. Continue play until one player has filled their Chili Bowl with chili peppers!