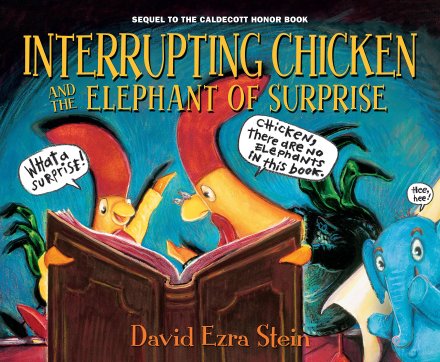 Sponsored by Pizza Hut and the Center for the Book in the Library of Congress since 1989, this week-long holiday centers on raising awareness of reading. Schools participate in setting reading goals for their students who are then rewarded for meeting them. Principals, teachers, and families get involved too, as kids all over the country get excited about reading.

Interrupting Chicken and the Elephant of Surprise

The little red chicken was excited to come home from school and tell her Papa the amazing thing she’d learned that day. “Today,” she said, “my teacher told us every story has an elephant of surprise.” She grabbed her papa’s arm and hurried him to the big comfy chair to read a story and find the elephant. Papa corrected her, saying that her teacher hadn’t mentioned an elephant of surprise but an element of surprise. What’s that? Chicken wanted to know.

Papa explained that the element of surprise is the part that “makes you say, ‘Whoa! I didn’t know that was going to happen.’” That sounded like an elephant to Chicken, so she urged her papa to start reading. Papa opened the book with a caution that he didn’t think there were any elephants in the story. Papa began reading The Ugly Duckling. He had just gotten to the part where the ugly duckling peered into the pond at his reflection and discovered that… “Surprise! I’m an Elephant!” The blue elephant with pink wings and a waterlily hat thanked Chicken for finding him.

Next Chicken picked out the story of Rapunzel. Papa read, and the Prince had just climbed up the tower and was gazing at his love while she said… “Surprise! I’m an Elephant!” The elephant was impressed by Chicken’s powers of detection. Papa considered his little chicken and told her that the idea of an elephant in Rapunzel was “ludicrous.” But Chicken just looked at him with eyes sad and sorry for the poor elephant “waiting for someone to find him.”

Chicken told Papa she had to read one more story and find the elephant for homework. Papa was resigned. Chicken pulled The Little Mermaid off the shelf and Papa began to read. The little mermaid drank the magic potion, crawled from the sea, and fainted. When she awoke, the prince was there, and she saw that her dream had come true—she had… “elephant legs! Wow! That was a surprise!” Chicken exclaimed.

Now that Chicken had found her three elephants, Papa was ready to tell her a story that could in no way have elephants in it. Chicken was ready with her pencils to draw the pictures. Papa’s story was about a daughter who loved elephants so much she saw them everywhere—even when there were no elephants. There were no elephants when she got dressed or when she had breakfast before she went to… “Elephant school!” Chicken was so happy to find an elephant right at the end of the story that she gave Papa a big hug before asking him to help her with her math homework.

You can feel the giggles forming in giddy anticipation of where the elephant of surprise will appear from the very first page of David Ezra Stein’s adorable sequel to Interrupting Chicken. The little red chicken’s glee at her certainty that an elephant lives in every good story is infectious, and empathetic readers will be on the lookout for this well-placed pachyderm. Stein expertly wrings droll humor from the juxtaposition of the flowery retellings of The Ugly Duckling, Rapunzel, and The Little Mermaid with the weighty substitution of the elephant at the moment of greatest suspense.

The endearing relationship between Papa and his little chicken is one of the sweetest charms of this series, and Stein fills every page with this warmth through his color palette of rich reds and blues and the little details of home: a steaming cup of tea sits on a small table next to Papa’s chair, Chicken brings in a snack of chips and dip to munch while listening, and a single lamp throws a cozy glow over the room. It’s easy to see by the gleam in little chicken’s eyes that she cherishes not only the stories but her special time with Papa. Young readers will embrace Interrupting Chicken and the Elephant of Surprise with the same zeal.

For laugh-out-loud, snuggly story times, Interrupting Chicken and the Elephant of Surprise can’t be beat. Whether your child is a fan of Interrupting Chicken or just meeting the little red chicken for the first time, David Ezra Stein’s sequel makes a perfect gift and will be a favorite addition to home, classroom, and public libraries. 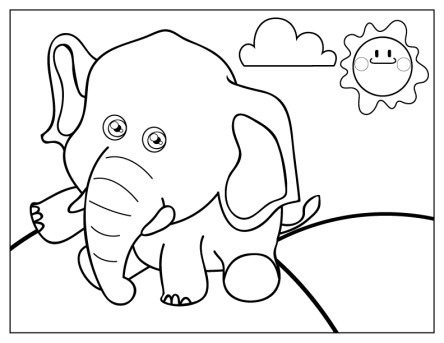 Color these pages and put them in your favorite books to make sure you can always find an elephant of surprise inside! 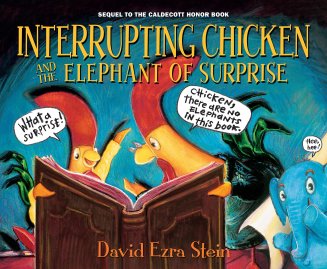