Tinted glasses have been around since judges in ancient China used them to disguise their emotions. Modern sunglasses were first sold in 1929 by Sam Foster on the Atlantic City Boardwalk, and Bausch and Lomb was commissioned in the 1930s by the Army Air Corps to create glasses to ease the high-altitude glare pilots faced. In 1936 Polaroid filters were first used to protect eyes from  damaging UV rays in Ray Ban sunglasses.Since the 1970s movies have helped escalate the popularity of many styles of sunglasses as fans strive to look like their favorite actors and actresses. Today, grab your sunglasses or shop for new ones because—you know why…sing it with me… “The future’s so bright, I gotta have shades!”

Chu’s Day at the Beach

As readers of this series know, “when Chu sneezed, big things happened.” With this tantalizing and slightly-ominous-in-a-way-kids-love statement, Chu’s latest adventure begins. Turning the page kids discover that Chu and his family have headed out to the beach. Chu is having a great time: the octopus selling ice-cream gives him an extra scoop of vanilla, and Chu meets a crab in a rock pool; even Chu’s mom is enjoying a book under the umbrella and his dad is wading in the ocean.

Chu takes his sunglasses off to better enjoy the bright, sunny day, but suddenly Chu’s nose tickles. The tickle grows until it fills his whole head and he can’t hold it in anymore—“AAH- AAAAH- AAAAAH- CHOoOoOoOO!” Chu looks out to sea. “‘Uh-oh,’” he says. Everyone on the beach comes down to the water’s edge to look at the huge suspended wave Chu has sneezed up.

Like standing in front of an aquarium exhibit, the beachgoers find themselves eye-to-eye with sea creatures who are suddenly encased in the wall of water. The fish, turtles, whales, and merpandas are sad—“‘With the sea broken, I cannot go home,’” one whale explains. The ice-cream vender tells Chu to sneeze again and put the sea “‘back the way it was.’” But try as he might, Chu can’t sneeze. A seagull tickles Chu’s nose with a wing feather and the octopus offers Chu a fizzy drink with bubbles that go up his nose, but nothing elicits a sneeze. 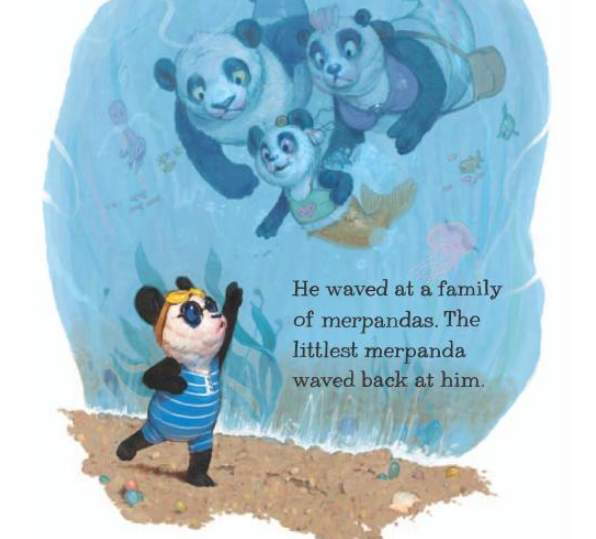 All seems lost until Tiny the snail reveals that sometimes he sneezes when he looks at the sun. Chu removes his sunglasses and gazes into the light. “AAAAACHOOOOO!” “‘There, said Chu. Everything is back just as it was before.’” The sea creatures are happy that they get to return to their homes, the ice-cream seller is so pleased that she scoops up another cone for Chu, and Chu? He declares that it was the best day at the beach ever.

With his singular style Neil Gaiman conjures up a story for kids that combines just the right amount of sweetness and absurdity to keep the giggles going from the first page to the last. We all experience those uncontrollable mishaps and “oh no!” moments where a little help and empathy is appreciated. And what child wouldn’t love to stop the ocean, even if only for a moment? Gaiman’s repeated sneezes will have kids “Aah-chooing” along, and an animated reading of the chorus “AAH. AAAAH. AAAAAH. NO.” is sure to bring laughs and requests for “Again! Again!”

If only the beach was as full of interesting creatures as Adam Rex portrays in his vivacious illustrations! Crossing the dunes Chu and his family encounter an intriguing array of animals stretched out on towels—from a tiny cricket to a pangolin to a hunky frog with his clever insect-snack-strip-adorned umbrella and more. Ice-cream vendors no doubt wish they had the eight arms of Rex’s frozen-treat seller, and there’s even an ostrich with his head in the sand. Chu’s tidal wave teems with surprised sea creatures, some stuck mid-way between their ocean world and the dry outside. Chu remains as cute as ever, inviting kids to join him on his latest adventure.

The summer sun is so bright that these friends need sunglasses before they go out to play! Can you follow the paths to match each child with the perfect pair? Get the printable Perfect Sunglasses Matching Puzzle and have fun!