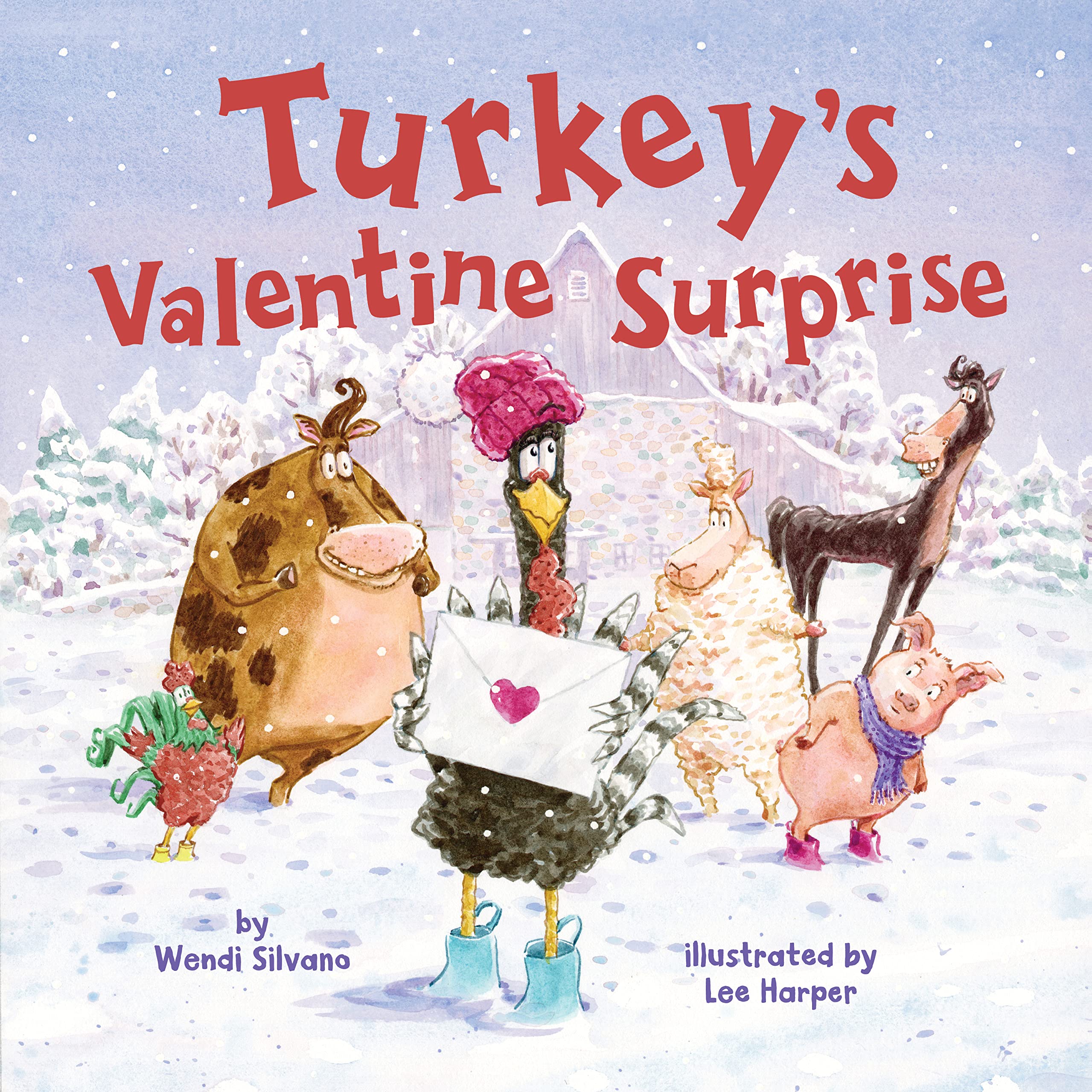 Laughter is a powerful uniter. Sharing jokes, funny videos, and, laugh-out-loud books is the perfect way to bring a group or family together. Not only is a hearty belly laugh fun, it’s good for your soul and your health! Today’s holiday encourages us to smile, laugh, and engage in all the things that bring us joy. It’s also a day to think about and thank those who share their funny stories, fun times, and laughter with us whether they’re professional comedians or your own family members. So celebrate today by spending time with friends, telling jokes, watching a funny movie, and, of course, reading hilarious books—like today’s!

On a snowy February 14th at Farmer Jake’s farm, Turkey, Pig, Cow, Horse, the Sheep, and Rooster and the Chickens were exchanging Valentine’s Day cards and candy. One of Turkey’s cards made his wattle wiggle with laughter. “Dear Turkey, You are like no otter! From a Secret Admirer” it read. Turkey loved the valentine so much that he wanted to make one for each of his friends. He decided he would write clever messages and deliver his cards in disguise so his friends would never know who their secret admirer was.

But how to get started? The chicks helped him find the “purr-fect” pun, and as Turkey designed his card with a smiling cat on it for Rooster, he came up with a costume that was sure to fool his friend.  Hidden (almost) in a barrel sporting wooden ears, button-and-straw whiskers, and a rope tail, Turkey crept to Rooster’s mailbox. No sooner had Turkey slipped the valentine into Rooster’s box than Rooster picked it up and read it.

He took one look at the “cat” who had delivered it, and said, “‘I have a feline that you’re not a cat . . . you’re Turkey!'” Then he added, “‘But what a clever valentine!'” Turkey was disappointed that he’d been discovered, but with Rooster’s help made another valentine and disguise to try to surprise Horse. But Horse turned out to be just as perceptive as Rooster. “‘Oh, gobble, gobble,’ groaned Turkey. ‘I wanted it to be a secret surprise.'”

Cow’s “toad-ally awesome” valentine went awry too, and so did Turkey’s plans for Sheep’s and Pig’s. Still, everyone thought Turkey’s punny valentines were wonderful. Turkey went home to cheer himself up with his own valentines. That’s when he saw a candy “heart that gave him one last idea.” With only two hours before the Valentine’s Dance, Turkey hurried to prepare his surprise. Before anyone had arrived at the barn, Turkey set up his surprise.

Turkey watched as his friends enjoyed his special delicious treat — complete with a witty message to show how much their “secret admirer” loved them. Then he sat down among them and enjoyed some of it himself, excited that “‘No one will ever know it was me!'” But did they?

Everyone’s favorite Turkey and all the animals on Farmer Jake’s farm are back for the most loving holiday of them all, and Wendi Silvano gives kids plenty to love in her sweet and funny story. Fans of the series know how much the farm animals care for each other, and their feelings are on endearing display here as each animal has a box or bucket overflowing with valentines. When Turkey gets a punny valentine from a secret admirer, he’s excited and determined to give his friends the same thrill.

This idea gives Silvano carte blanche to sprinkle in as many puns as the pages will hold. Turns out the other animals are just as adept at puns as Turkey, giving kids lots to laugh about and, perhaps, even some inspiration for their own valentines. Kids will also be delighted to see Turkey return with his signature disguises. But in his last attempt, does Turkey really bamboozle his friends as their secret admirer? It’s up to readers to say yes or no. A few scattered clues may help them decide. The animals’ obvious delight in their Valentine’s Day cards – apart from the dramatic deliveries – shows their sensitivity to Turkey’s feelings as well as their own affection for their friend.

Lee Harper’s vibrant illustrations put Turkey and the other farm animals front and center as the punny valentines and candy hearts are prominently displayed to set kids giggling. Each of Turkey’s silly disguises will have kids laughing and talking about what he made them from. Turkey’s indomitable spirit is one of the most charming parts of the series, and here his desire to surprise his friends surpasses all of his disappointments in being recognized and keeps him going with infectious glee.

Turkey’s Valentine Surprise is a laugh-out-loud, feel-great story that makes a terrific read for the run-up to Valentine’s Day or any time of the year as well as a fantastic gift for that special someone. Fans of the series as well as those new to Turkey’s antics will want to bring Turkey’s Valentine Surprise home to roost. The book is also a must for school and public library collections.

Wendi Silvano was born in Salt Lake City, Utah, and has lived in Oregon, Colorado, and Peru. The author of the Turkey Trouble series, she has a BA in early childhood education and taught preschool and elementary school for eleven years. She is the mother of five children and the owner of an assortment of odd pets that are not nearly as clever as Turkey. She now writes from her home in Colorado, where she enjoys hiking, reading, and playing the piano. Visit her at wendisilvano.com.

Lee Harper is the author-illustrator of the books Coyote, The Emperor’s Cool Clothes, and Snow! Snow! Snow! Lee is also the illustrator of the Turkey Trouble series by Wendi Silvano as well as the Woolbur series, written by Leslie Helakoski. Lee has four children, a German shepherd, two barn cats, eleven chickens, and four sheep…but still no turkeys. Yet. He lives with his wife in Bucks County, Pennsylvania. Visit him at leeharperart.com.

These friends are collecting valentines! Can you help them follow the paths to find more in this printable puzzle?

You can find Turkey’s Valentine Surprise at these booksellers