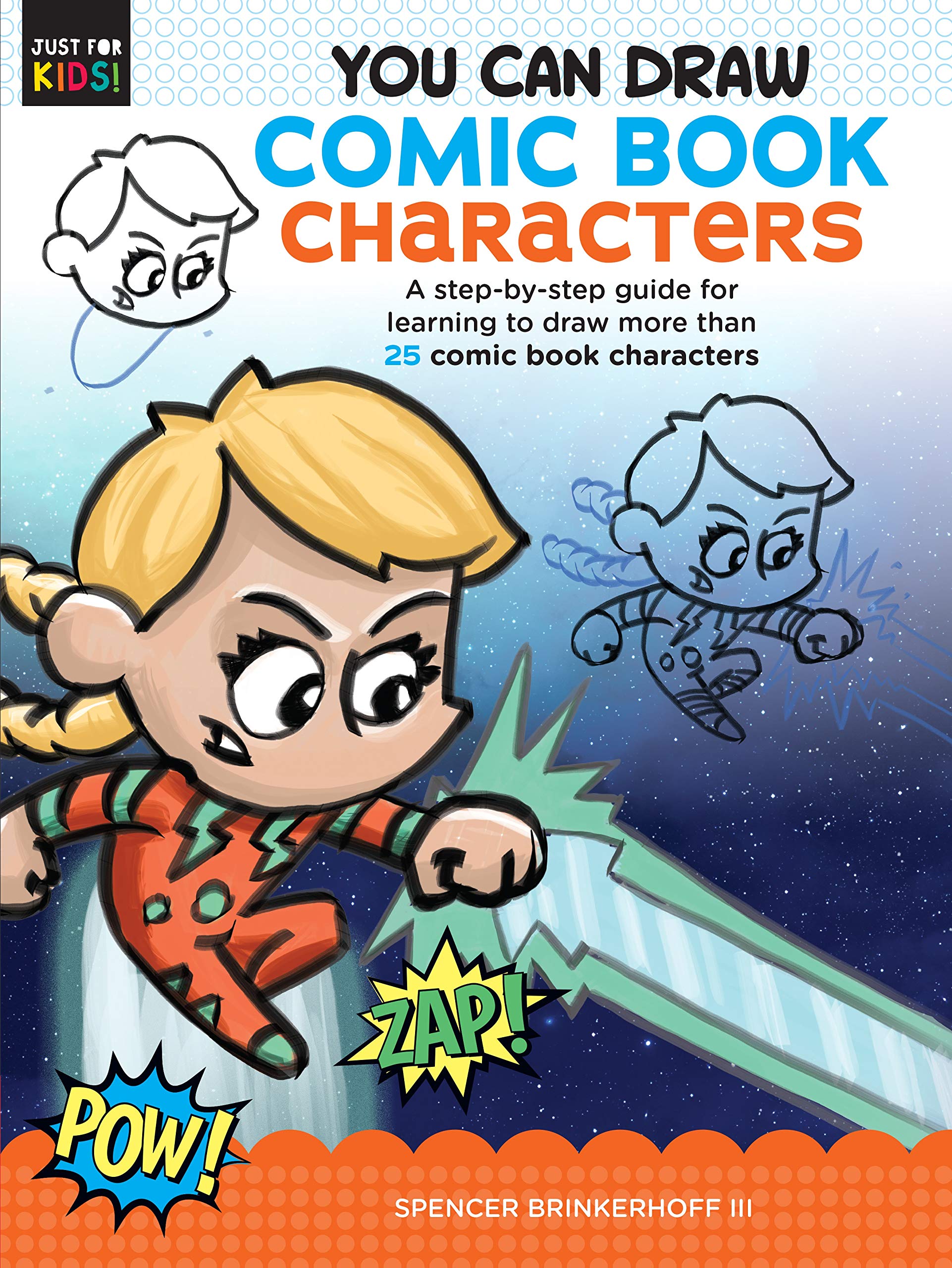 We all have unique talents and abilities. Today’s holiday was established for us to define our abilities and think about how we would like to use them for ourselves and others. Whether your talents lie in the arts; science, math, and technology; the humanities; teaching and leadership; or kindness, with courage, confidence, and practice you can accomplish amazing things. Today’s books feature two very different talents and are accompanied by videos that can teach you how to use your creativity to achieve success.

You Can Draw Comic Book Characters

Do you have a comic book creator inside yearning to blast free? In this step-by-step guide, Spencer Brinkerhoff III shows you how to draw more than 25 original -comic book characters, draw with perspective and from different angles, and how to use simple shapes to create all of the characters running around in your imagination. To get started, Brinkerhoff introduces readers to the tools of the trade, especially one type of template that ensures that your characters are always in proportion whether they’re standing still, flying, climbing, running, or engaged in battle.

Whether you’re drawing a hero or a villain, Brinkerhoff presents illustrated steps for creating the head, complete with guidelines that tell you where to put the eyes, hair, and other facial features; how to add the body and sketch in arms and legs in active poses. Brinkerhoff then invites artists to make these prototype characters their own by showing how through hairstyles, clothing, and facial features you can add personality and individuality to your characters.

But characters aren’t just created through their physical appearance—readers also want to know what makes them tick. Brinkerhoff adds specific and enlightening guidance on how to design a well-rounded character that readers will care about. He discusses general ideas on how heroes and villains come to be then gives specific examples of backstories, motivations, powers, and limitations for heroes, villains, and all the minions and sidekicks in between.

Once you’ve practiced drawing your character, it’s time to add some color, and Brinkerhoff has you covered there too with tips on choosing colors to make an effect, how to make it look as if a character is wearing a helmet with a face shield, and how to make Zaps and Zings really shine.

So, you have characters with histories—now what? They need a story to live in! Brinkerhoff reveals how to develop a strong story from beginning to end and create a script. Then he shows artists how to plan and draw panels that help tell the story, create good story flow, establish mood and location, include dialogue and sounds, and add the kind of suspense that keeps readers turning the pages. Finally, Brinkerhoff shows readers how to put it all together to make a complete comic book. He follows this up with larger templates for characters who are standing, flying, and fighting as well as a few in various action poses. 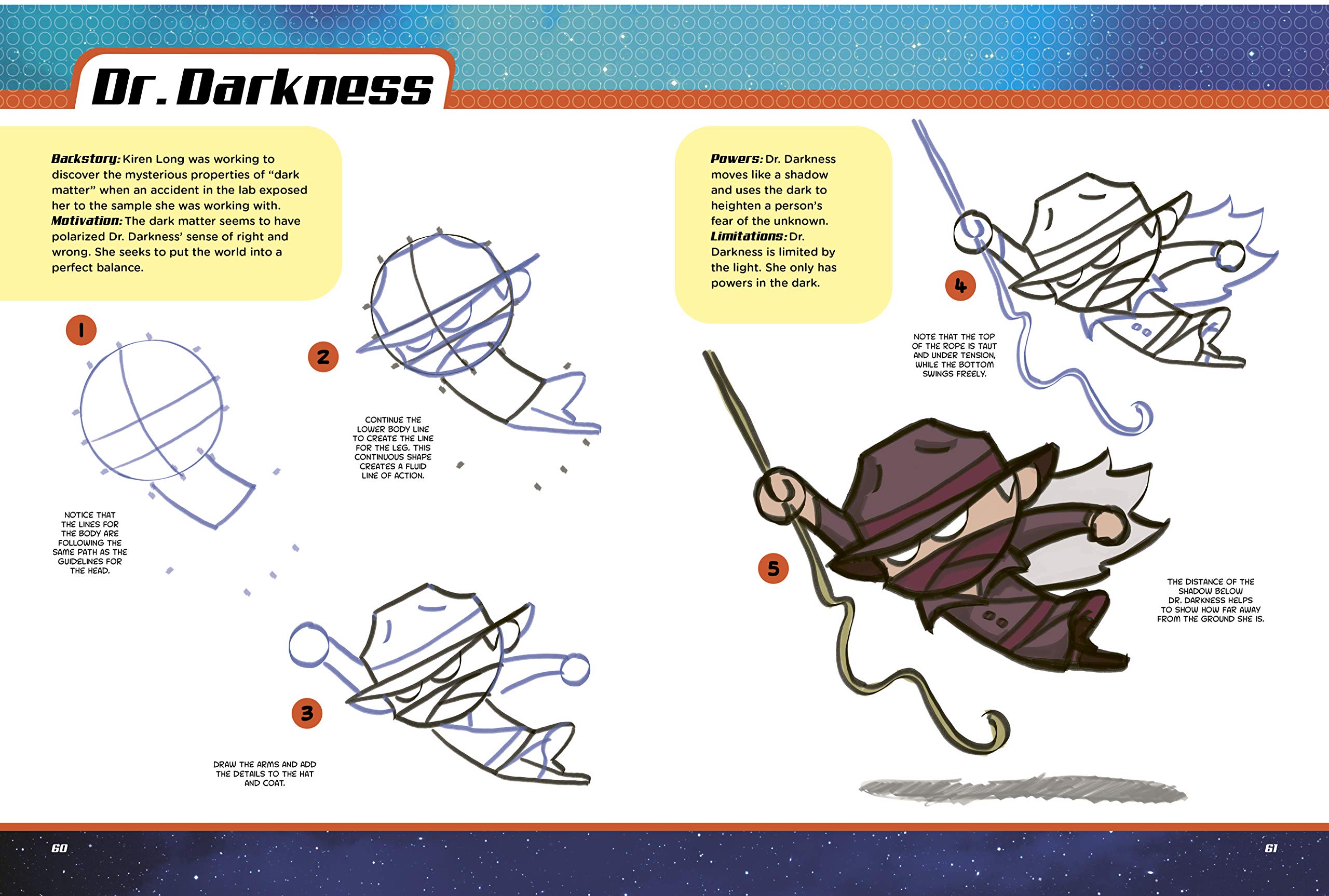 Spencer Brinkerhoff presents an excellent guide for artists and would-be artists of all ages with specific help and plenty of opportunities to practice a variety of body styles, facial expressions, poses, and all accompanying accents. The diversity of examples and the emphasis on other aspects to creating successful characters and complete comics will spark children’s imagination and help them develop their talent for both drawing and writing, which are equally important in creating the kinds of comics that readers fall in love with and want to read again and again.

A superb drawing book for children, You Can Draw Comic Book Characters would make a much-appreciated gift for young artists and an often-used, go-to book as children or adults work on improving their drawing and visual storytelling abilities. The book is a must for home bookshelves for aspiring artists as well as for school and public library collections.

Spencer Brinkerhoff III started drawing and making art at an early age and has never stopped. Spencer’s professional work has included creating Star Wars art for Lucasfilm Ltd, animating an educational game for the World Health Organization, creating and starring in a video that won him Burt Reynolds’ Trans Am, and creating some of the horse sculptures for the PF Chang’s restaurants. In addition to working on these licensed projects, he has also created a glasses-less 3-D image platform called ShadowBox Comics, an in-camera special effect keychain called LightStickFX, and a drawing system called DrawingIsSimple. You can discover more about Spencer Brinkerhoff III, his art, and his work on his website.

In this video and two more videos from Quarto Classroom, children and adults can learn from Spencer Brinkerhoff III how to create two original characters from You Can Draw Comic Book Characters: Captain Jinx Tagget and Savage. In the first video Spencer Brinkerhoff demonstrates each step in drawing his hero Jinx, talking viewers through an easy method for creating the head and body, the whys and hows of facial-feature placement, and how to add accents to make each character distinctive. In his second video, Brinkerhoff uses a prop that gives new artists clear visual help in understanding how a face can be drawn when tilted and turned. He also demonstrates how to draw Jinx when flying.

In his third video Brinkerhoff shows kids how to draw the imposing Savage, a character that uses different proportions yet is still derived from basic shapes beginning with a circle. At the end of each twenty-five-minute session, he gives a lesson on adding color to the character. Brinkerhoff’s easy-going and encouraging delivery will instill confidence in artists and get them excited about designing their own characters. 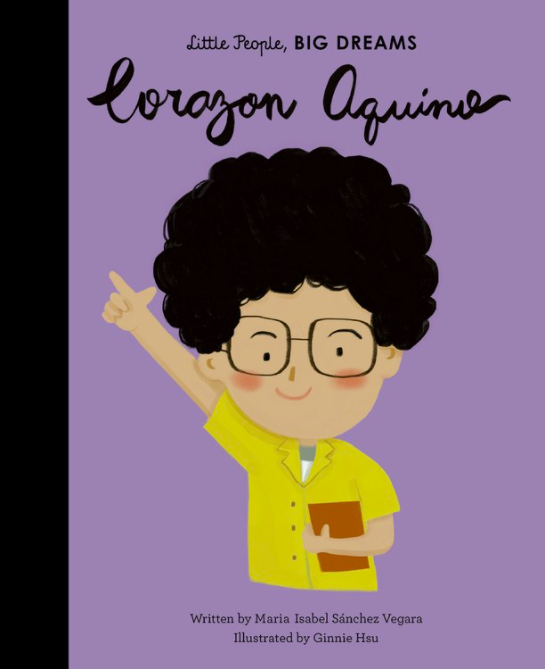 Maria Corazon—better known as Cory—was a little girl growing up in the Philippines, a country made up of thousands of islands. At school, she learned lessons on reading and writing and math and also “how to take a step forward.” For example, when one of her classmates was not able to make a speech in front of the school, Cory volunteered to give it.

When Cory was still a child, her parents send her to America to study. When she returned home after graduating from college, she was determined to become a lawyer. While in law school, “she became close with a student as honest and as bold as her.” His name was Benigno, but those who loved him called him Ninoy. Ninoy went on to become a politician. He wanted to help his fellow Filipinos and became an ardent critic of the country’s dishonest president. Because of his opposition to the president, he was arrested. Then Cory wrote speeches and became her husband’s voice for nearly eight years while he was in prison.

Declaring more and more unfair laws, the president became a dictator and forced Ninoy, Cory, and their family to leave the country. They moved to Boston, Massachusetts and were happy there, but after three years “Cory knew that Ninoy had to go home and try to restore democracy, giving power back to the people.” They returned to the Philippines, but the president’s men were waiting for them and Ninoy was killed.

Cory felt alone, but at Ninoy’s funeral millions of people showed that they were with her, giving “her their love and support.” Cory decided it was up to her to continue Ninoy’s work. She ran for president and won, but the defeated president “faked the results of the election” and sparked a revolution. For four days “millions of people armed with courage took to the streets and proclaimed Cory president of the Philippines. The dictatorship crumbled and Cory became the first female President of the Philippines. Through her lifelong courage and honesty, little Cory grew up to save democracy for her people and change their lives forever.

A timeline of Corazon Aquino’s life follows the text.

Maria Isabel Sánchez Vegara’s excellent biography of Corazon Aquino for young readers introduces them to this amazing woman with well-chosen details about her life and the personality traits that made her singularly suited for her role in leading the Philippines out of the darkness of dictatorship. Vegara’s straightforward storytelling reveals her respect for the intelligence and social conscience of her readers as she relates hard facts about life in the Philippines at the time and its personal consequences for her family. Examples of Corazon’s courage, from giving a speech at school to giving voice to millions of people, will inspire readers to show bravery in their own pursuits, both big and small, and prompt them to look for ways that they can make a difference.

Through Ginnie Hsu’s captivating illustrations, readers are introduced to a brief view of the diversity of communities among the islands of the Philippines and the cities and schools that nurtured her while growing up. Children see the enthusiasm with which crowds met Cory and Ninoy on his political rise. In a clever two-page spread, a speech that Ninoy is writing spills from his typewriter, across the two pages and into Cory’s hands as she reads her husband’s words after his arrest. Images of people lining up to vote will be familiar from our own recent election and offer opportunities for adults to discuss the importance of voting. Adults may remember Corazon Aquino’s signature yellow outfits, which Hsu recreates here. Hsu’s vibrant illustrations, packed with the people that supported the Aquinos, demonstrate the change that, together, people of courage can affect.

An inspirational biography of an influential leader, Corazon Aquino is an excellent addition to the Little People, BIG DREAMS series and offers a meaningful way for adults to introduce young readers to political and social leaders and the ideas of responsibility and leadership. The book is highly recommended for home, school, and public library collections.

Maria Isabel Sánchez Vegara, born in Barcelona, Spain, is a writer and creative director in constant search of new concepts for children’s books and the author of the multimillion-copy best-selling Little People, BIG DREAMS series of picture books that explore the lives of outstanding people. Working for more than fifteen years for clients in top advertising agencies, her books combine creativity with learning, aiming to establish a new and fresh relationship between children and pop culture. You can connect with Maria Isabel Sánchez Vegara on Instagram.

Ginnie Hsu is an illustrator, designer, and educator living in upstate New York. Her work is often inspired by everyday life, nature, human living, and well-being. Ginnie also enjoys foraging, yoga, and herbalism. To learn more about Ginnie Hsu, her books, and her art, visit her website.

In this video from Quarto Classroom you can listen to Ginnie Hsu read Corazon Aquino: Little People, BIG DREAMS and learn about the importance of the color yellow throughout the story as well as how color has become associated with other revolutions around the world. Hsu also introduces viewers to the meanings behind eight colors and how using these colors adds depth and meaning to a picture book and other illustrations. For example, yellow carries with it the ideas of positivity and happiness. After learning about colors and their meanings, Hsu invites kids to gather supplies in a color of their choice and to create a project meaningful to them. In keeping with the yellow in her book, Hsu chooses to make a sunflower from felt and a digital sunflower collage. She demonstrates how she puts together her felt sunflower and then shows children the variety of ways a sunflower can be drawn.

You can find Corazon Aquino: Little People, BIG DREAMS at these booksellers

With this printable guide from Spencer Brinkerhoff III, you can learn to draw Captain Jinx Tagget standing and in action with detailed and specific steps from making your first circle for the head to completing her superhero suit. You’ll find another guide on how to draw Savage at Quarto Classroom