Welcome to the 10th anniversary of National Fossil Day! Today’s holiday puts a spotlight on paleontology and its value in the scientific community and for education. The day raises awareness of the importance of preserving fossils for future generations. This year also marks the 100th anniversary of the establishment of Grand Canyon National Park, a treasure for scientists and nature-loving visitors alike. To celebrate today and Earth Science Week all this week, visit a natural history museum, learn more about the prehistory of your area, or read up on fossils and prehistoric creatures. You can learn more about today’s holiday and find resources, including Junior Paleontology Activity Books to download, on the National Park Service Website.

Everything Awesome about Dinosaurs and Other Prehistoric Beasts!

If there’s one thing kids can’t get enough of, it’s dinosaurs. And if there’s one thing Mike Lowery knows, it’s how to wow kids. The mash-up of the two has resulted in a wild and wacky book “that’s totally loaded with info, weird facts, and jokes that you will dig!” There are even dinos at the ready to point out these awesome puns. And these facts aren’t just presented like some old, dried-up report, the whole book—every page—is full of eye-popping illustrations and cool typography that will keep kids reading and reading and learning (and, oh yeah, having T-rex size fun). 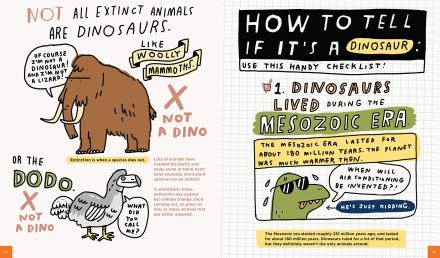 What kinds of things will kids learn? First, there’s a completely captivating prehistoric timeline that lays out the different eras and depicts some of the creatures and vegetation that existed in each. Like jellyfish during the Paleozoic Era, horsetails plants and dicynodonts during the Triassic, stegosaurus and cycads in the Jurassic; bees, birds, and flowering plants along with velociraptors in the Cretaceous; and finally, woolly mammoths and us during the Age of Mammals. Along the way there were also several extinction events. And this all comes even before the Table of Contents!

While kids chew on the fact that “some giant dinos ate up to 12,000 pounds a day,” they can dip into Part One—What Is a Dinosaur? Here, they’ll learn stuff like where the word “dinosaur” came, who coined it, what “prehistoric” means, and who “were some of the first people to keep written records.” They’ll also get to know some animals that weren’t dinosaurs and how dinosaurs are defined. Of course, there are some dino jokes to keep kids chuckling while they read.

Part Two reveals a short history of the earth as well as lots and lots about each era and representative creatures. After learning just how old Earth is, kids will be interested in a Quick Fact about one Jeremy Harper who counted to one million live on the internet. How long did it take him? Longer than you might think. Have you ever tried smooshing the whole history of the earth into just 24 hours? Mike Lowery did and it’s fascinating! Kids will also discover how Earth formed and about early signs of life.

What was going on in the Paleozoic Era? The haikouichthys (one of the first animals to have a skull), tiktaalik (a land and sea creature), and the meganeura (a giant dragonfly) can tell them. It was also the time of the Permian Period, when some pretty weird reptiles roamed the earth and some way-unusual marine life swam the seas. Then came “the Great Permian Extinction” that led into the Mesozoic Era, “aka the age of reptiles.”

Here, kids learn about the development of dinosaurs, non-dino animals, and bugs. If you think a few stormy days are bad, imagine living during the Triassic Period, when “it once rained for two million years.” What do you wear in weather like that? A “Jurassic parka,” of course. Next up is the Jurassic and then the Cretaceous periods and their gigantic creatures of the land, ocean, and sky.

In Part Three readers get to meet the dinosaurs up close and personal (well, not too close). They’ll learn what dinos really ate, how they really sounded, and this delectable fact: “More time passed between stegosaurus and T. rex than the time between velociraptor and microwavable pizza!” And while kids are digesting that, they’ll want to watch out for the gigantic sauropods (who grew that big partly because “they didn’t chew their food…. Mammals don’t get as big as the sauropods, in part, because chewing requires a lot of energy.” Kids will see who won the “smartest dino award” and who was unfortunate enough to win “the, um, not-so-smartest dinosaur award.” They’ll also learn about horned dinos, armored dinos, fast dinos, and “the weirdest lookin’ dino.”

Part Four talks about the Cretaceous-Paleogene extinction event and various theories that have been floated throughout the years. Part Five takes kids on a hunt for bones and other fossils and reveals how paleontologists study them. Part Six offers a tour of post-dinosaur beasts, and Part Seven invites kids to learn how to draw dinosaurs. That’s followed up by a Dino Field Guide, an illustrated list of dinos organized by time periods, and to round it all up, Lowery includes a few more irresistible dinosaur jokes.

Mike Lowery’s free-wheeling sense of humor, on exhibit in both his text and illustrations, will have kids laughing and learning billions of years’ worth of scientific facts. Funny asides by dinosaurs who just want in on the action put a spotlight on major events and conditions on Earth. Boxed and highlighted facts reveal the science of paleontology and provide explanations of dinosaur and prehistoric animal behavior and comparisons on size that will resonate with kids. Lowery imbues each of his creatures with personality while staying true to their nature and body type. Simply said, if there’s something you want to know about prehistoric creatures, dinosaurs, and the times they lived in, it’s in this book.

A must for home, classroom, and public library collections, you’ll want to put Everything Awesome about Dinosaurs and Other Prehistoric Beasts! on your shopping list for kids, teachers, and anyone who loves science, dinosaurs, and entertaining ways to learn or teach.

Discover more about Mike Lowery, his books, and his art on his website. 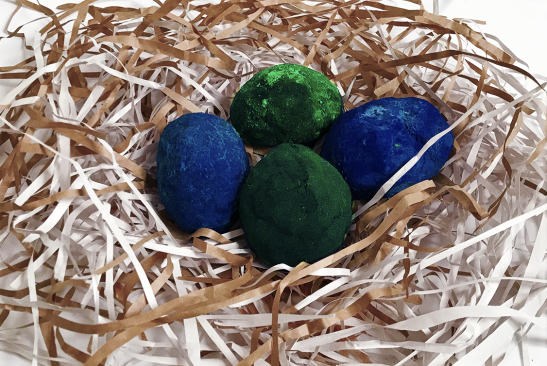 Hatch Your Own Dinosaur Eggs

Think there are no more dinosaur eggs to be found? Think again! You can make your own with this easy craft that will have you hatching some T.-rex-size fun! All you need are a few simple ingredients!

Spray the egg with vinegar to hatch your dinosaur

Chisel the egg open to hatch your dinosaur

To Bake the Eggs

To Hatch the Eggs

You can find Everything Awesome about Dinosaurs and Other Prehistoric Beasts! at these booksellers