World Anthropology Day was established as a day when anthropologists around the globe can celebrate and share their discipline with students and others interested in the world around us. What is anthropology? The short answer would be: the study of what makes us human. And what does this entail? That answer is much longer and includes the things people do, what we eat, what we wear, the way we communicate, and even such subjects as economics, health, education, law, and genetics. It studies the past but also looks to the future. The field of Anthropology and one of its subsets archaeology are endlessly fascinating. To learn more about Anthropology and careers in the field, find podcasts, and learn about resources, visit the American Archaeological Association Website.

This Is How We Do It: One Day in the Lives of Seven Kids from around the World

Each child lives with their mom and dad and various siblings. The largest family is Ribaldo’s; he has two younger brothers and a younger sister who still live at home. He also has four older siblings who don’t live at home anymore. When they go to school, four of the children wear uniforms and three choose their own outfits. Breakfast may be different for each child—with foods such as cheese, fried rice, plantains, eggs, bread and fish on the menus—but every morning starts out delicious.

After breakfast, it’s time to go to school. Kei walks along neighborhood streets in Tokyo, while Ribaldo and his sister and brothers walk along the main road, “sometimes stopping to buy a snack of sweet bread from a fruit stand.” Kian rides with his mother or father through the city, and Ananaya is driven to school through busy streets “past hotels, shops, and cows that freely roam the roads.” Romeo takes a school bus, and Daphine must walk a half-hour on a path that meanders past “groves of eucalyptus and banana trees.”

Each child enjoys learning different subjects with their friends. Ribaldo’s school in Peru is small, so the fifth and sixth graders study together in the same room, and in Russia Oleg has the same teacher and classmates from first through fourth grades. There’s time for lunch and then, after school, it’s time to play. Daphine likes to jump rope, Romeo and his friends have stone-throwing contests, and Ananaya plays “Rumaal Chor or ‘Hanky Thief’” in the part with her friends. Kei gets together with her friends at the neighborhood playground and plays “Koori Oni, or ‘Freeze Tag.’” Oleg is on a hockey team and practices almost every day.

Each child also helps around the house doing chores, tending the garden, feeding pets, and other jobs. Dinner is eaten with siblings and parents. Some families eat around 6:00 or 7:00, while others don’t eat until 9:00 or 10:00. After dinner, the kids engage in various activities: Oleg plays chess with his dad, Ananaya plays the board game Carrom with her sister, Kei reads mysteries with her mom, and Romeo and his dad build model cars. Then it’s time to go to sleep in their own comfortable bed underneath the same night sky.

Back matter includes photographs of the families that Matt Lamothe followed in writing this book as well as a glossary of words found throughout the text. The endpapers contain a world map that shows where each child lives. Author’s notes provide insight into the text and his own experiences in researching the book.

Matt Lamothe’s fascinating look at the lives of seven children from diverse countries of the world will captivate young readers. The snapshots of the children’s lives from breakfast to bedtime spotlight the subjects that kids are most interested in as they wonder what other children eat, what they wear, how they get to school and what they study, how they play, and what their bedtime routines are. In his straightforward text, Lamothe shows that children around the world are more similar than different with traditions that the readers themselves may share.

Lamothe’s colorful illustrations clearly depict food and clothing, neighborhoods and landscapes, classrooms and playtime, families and homes. Children will want to linger over the pages to take in all the details. His portrayals of kids in action at school, at home, and at play will have readers excitedly pointing out, “I do that!” “We eat that!” and wanting to try some of the things that are new as well.

A thought-provoking book to spark stimulating conversations among kids about their world, This Is the Way We Do It is a book to dip into again and again at home and in the classroom.

To learn more about Matt Lamothe, his books, and his art, visit his website. 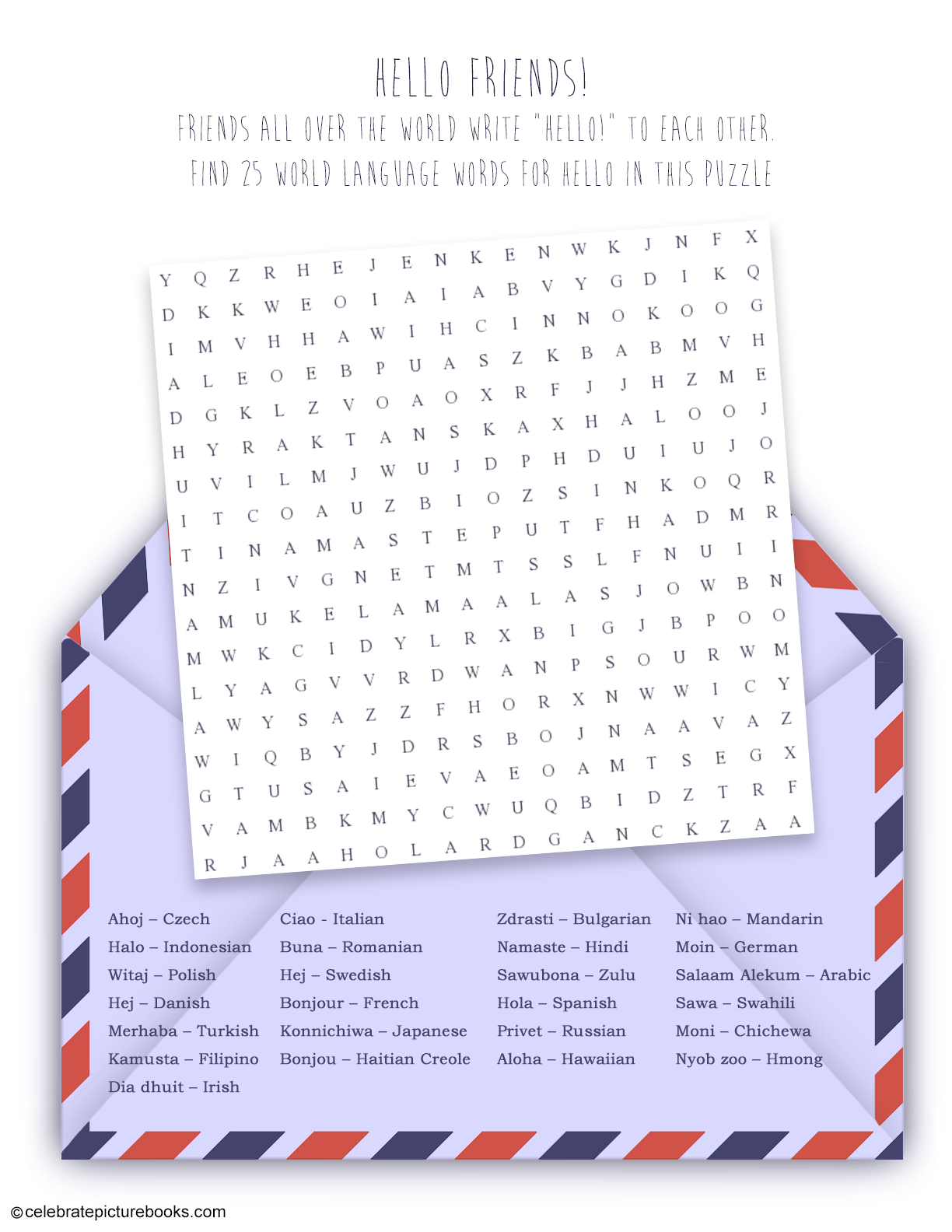 Saying “hello” to our friends and those we meet is something people do all around the world. Find the word for “Friend” in twenty-five languages in this printable puzzle.

You can find This Is How We Do It: One Day in the Lives of Seven Kids from Around the World at these booksellers