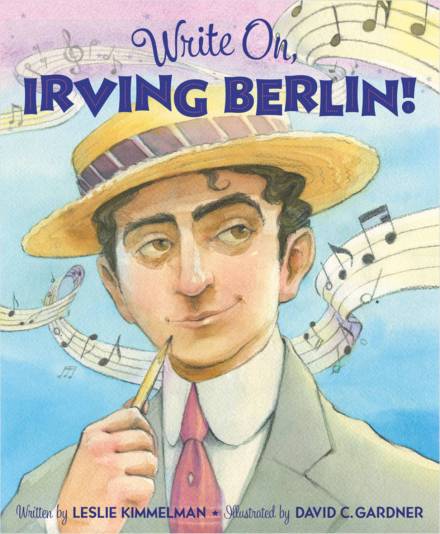 Caroling is a long-standing tradition of the holidays. Gathering with friends and neighbors as part of a professional singing group or just as amateurs and singing Christmas songs door to door, at nursing homes, and other community venues brings joy and cheer to all. Both hearing and singing favorite songs that only come around once a year makes caroling a much-anticipated activity. Today’s holiday celebrates the love of caroling and encourages people to raise their voices and join in. It’s also a perfect day to highlight the life of the man who wrote one of our most beloved carols—White Christmas—with today’s book!

In September of 1893 Moses and Lena Baline and their six children, including 5-year-old Israel, sailed into New York Harbor hoping “to start a new life in a new country.” They came from Russia, where their home had been burned down by “gangs of angry men” who “rode from village to village in pogroms, destroying Jewish homes and hurting the people who lived in them.” In America, the Balines had a small apartment, little money, and little food. But they did have freedom.

At school, Izzy—as Israel was nicknamed—paid less attention to his schoolwork than to the music in his head. When Izzy was only thirteen, his father died. Izzy knew that money was tight, so he moved out and made his own living singing in saloons, in the chorus line of New York shows, and even as he waited tables.  Irving as Izzy now called himself, became a professional song writer when he was paid 37 cents for his first song.

Irving continued to write the tunes that filled his head. When Ragtime was all the rage during the early 1900s, Irving tried this new, jazzy kind of music, and his “‘Alexander’s Ragtime Band’ was a smash.”  Irving married, but his wife died only a few months after their wedding. Irving consoled himself by writing. He became an American citizen, and when he was drafted into the US Army during WWI, he wrote songs to encourage his fellow soldiers. When he married again, he was inspired to write a song called “Always” about a love that lasts forever. 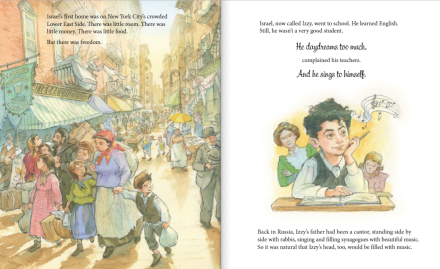 Irving never seemed to be without a tune in his head. He “wrote music for plays, for movies, for friends, for strangers. He scribbled ideas on napkins and on the sleeves of his shirt. He wrote songs in elevators and in taxicabs. He wrote songs in the bathtub.” During World War II, one of his older songs—“‘God Bless America’ became a HUGE hit.” In the winter of 1942, Irving wrote what he considered not only his best song, but the best song anyone had ever written: “White Christmas.” It’s sentimental words and catchy tune inspired the American soldiers engaged in battles around the world and helped them “remember all the things they were fighting for.”

Since Irving was too old to fight in the war, he developed a show called “This is the Army” that he took around the world to entertain the troops. His “cast was completely integrated—black and white soldiers lived, ate, and traveled together, which was rare in those days.” Even after the war ended, Irving continued to write songs that people still love today.

An Author’s Note about Irving Berlin and his songs as well as books for further reading follow the text.

Leslie Kimmelman brings to life the story of one of America’s most prolific and beloved song writers with enthusiasm and wit and the kinds of details that capture kids’ attention and inspire them to learn more. Timely for this year’s 100th anniversary of the writing of “God Bless America” and the 80th anniversary of its public appearance, Write On, Irving Berlin would make an excellent centerpiece of school music units when paired with Berlin’s songs, many of which kids will recognize. Berlin’s success, as revealed in Kimmelman’s well-paced, upbeat, and conversational storytelling is a powerful motivator for any child with big dreams.

David C. Gardner’s beautiful, softly-washed and detailed paintings take readers from the New York neighborhoods, restaurants, and dance halls of the early 1900s to the battlefields of World Wars I and II to the bright lights of Broadway, where his last musical, “Annie Get Your Gun” is advertised on the marquee. Along the way, kids see Irving as a child, a young man, and an older professional, always with a pencil and paper in hand. Images of the Statue of Liberty seen throughout the book tie together the theme of the immigrant’s experience, Berlin’s love of America, and one of his most famous works, “God Bless America.”

Write On, Irving Berlin! is an excellent biography that should find a home in classroom, school, and public libraries as well as on home bookshelves for children who love history, music, and biographies and who have big ideas of their own.

Discover more about Leslie Kimmelman and her books on her website.

To learn more about David C. Gardner, his books, and his art, visit his website.

Grab your crayons or pencils and have fun with this printable Musical Mice Coloring Page! 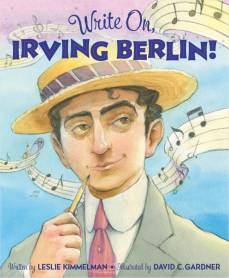 You can find Write On, Irving Berlin! at these booksellers