Tick tock. Tick tock. Do you hear it—that steady march of time counting down the hours until 2018 is just a memory? Are there things that you wanted to do this year that you just haven’t gotten to? No worries! There are three days left to finish that project, call that friend, get more organized, or whatever is niggling at the back of your mind. So get moving—but remember, there’s a whole new year coming up to fill with joy.

“Mr. Winky mended clocks. He took care of shabby clocks with dirty faces, poor old clocks with broken hands, and lazy clocks that wouldn’t run.” When the clocks were fixed, Mr. Winky wound them and waited for their owners to come back for them. Mr. Winky’s shop was alive with tickety-ticks, tick-tocks, cuckoo-cuckoos and even a tinkly song from the Swiss clock.

One day when Mr. Winky was enjoying all the sounds in his shop, Mr. Glum dropped by to chat. But when he heard all ticks, tocks, bongs, and cuckoos of the various clocks, he stuck his fingers in his ears and said, “‘How can you stand this awful noise? I was going to visit with you awhile, but I can’t hear myself think!’” And he left the shop, “slamming the door behind him.”

Mr. Winky’s feelings were hurt and he tried to think of a clever comeback to say the next time he ran into Mr. Glum. But suddenly, amid all the ticks and tocks, bongs, and cuckoos, Mr. Winky couldn’t hear himself think either. He ran out of the shop. Outside on the sidewalk things seemed quieter. But as soon as he stepped off the curb, he heard the “squoonk” of a taxi cab, the “squeech” of brakes and the “clang-clang-clang” of the trolley.

Mr. Winky decided he had to leave the city, so he went to the train station and boarded a train to the country. But even here he heard the crunch, crunch of the peanuts he was snacking on, the who-oooo-oooo of the train whistle, the clickety-clack of the wheels on the track and the “pickety-pick, pocket-pock” of the conductor punching tickets. This was just too much, so Mr. Winky got off at the next stop.

He found himself on a country road. There he found a farmhouse where he could spend the night. Before dinner he went out to the water pump, which squeaked as he washed his hands, and while the dinner was delicious, the clinking of utensils and clanking of plates made him run up to his room as soon as he was finished. 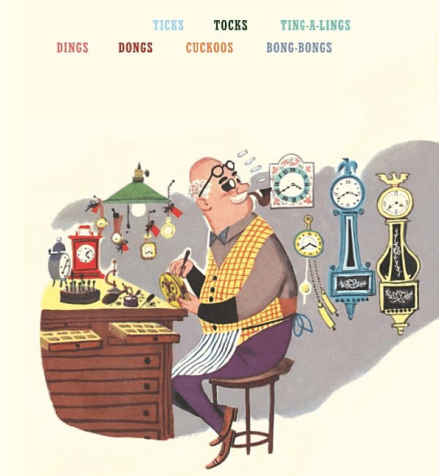 The next morning, he took off for the woods and at first it was quiet, but then a squirrel began chattering, a crow caw-cawed, leaves and twigs rustled and snapped underneath his feet, and he even “ran smack into a big brown bear.” Mr. Winky turned around and ran out of the forest, past the farmhouse, and all the way to the train station, where he bought a return ticket to the city.

He hurried through the city,  where the “clang-clang” of the trolley, the “eeee-eeee-eeee” of the firetruck siren, the “squoonk” of the taxi horn filled the air, and rushed through the door of his shop. It was so good to be back. But something was wrong. Mr. Winky checked his workbench, opened the cash register, and felt for his eyeglasses, but everything was as it should be. Then he realized it was too quiet in the shop.

The clocks had all stopped ticking and tocking, cuckooing and tinkling because they hadn’t been wound. Mr. Winky couldn’t stand the silence. He set to work winding each clock. “Soon all the clocks began to talk,” and Mr. Winky was happy. “‘I dearly love a cheerful shop,’” he said. “‘And who wants to hear themselves think, anyhow?’” 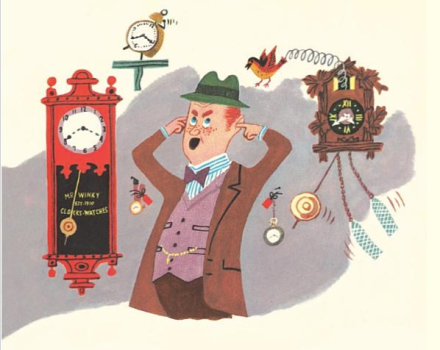 Jean Horton Berg’s classic tale has lost none of its power to enchant young readers even in this day of digital timepieces. Her story of discovering or rediscovering those things that make us happiest will resonate with kids and adults and awaken awareness of the people, objects, and work that bring the most joy. Berg’s fast-paced, humorous storytelling is filled with onomatopoeia that kids will love to echo, and Mr. Winky’s return to his beloved clock shop mirror’s a child’s happiness to come home after a day at school or out in the world. 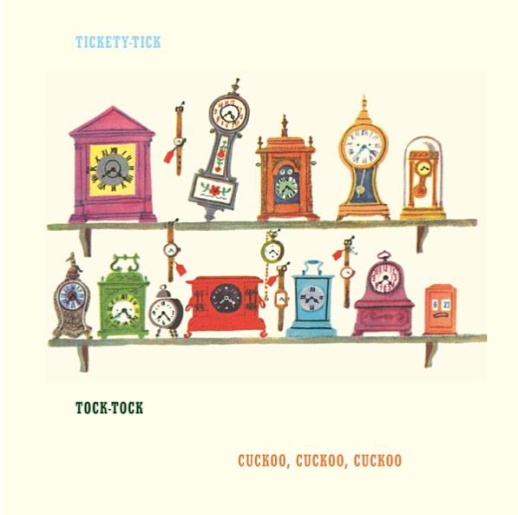 Children who may be unfamiliar with the intricate beauty and even quirky personalities of old-style clocks will be charmed and intrigued by Art Seiden’s spirited and detailed illustrations of Mr. Winky’s shop. As Mr. Winky escapes into the city and country, kids will discover plenty of familiar sights as well as some treasures of the past, such as a hand water pump and an electric trolley car. But the clocks are the stars and may inspire kids to learn more about these objects that needed their workings wound and hands turned and once stood in places of honor in nearly every home. The story may even spur a visit to a clock-repair shop—if one still exists in your neighborhood.

A timeless story that generates giggles as well as thought, this G & D Vintage reissue of the 1950’s favorite The Noisy Clock Shop makes for a fun story time at home or at school.

The chirp of a cuckoo clock keeps you on time—or at least aware of the passing of time! Here’s a printable Cuckoo Clock Coloring Page for you to enjoy! 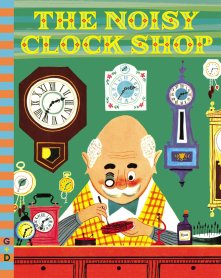 You can find The Noisy Clock Shop at these booksellers