When you love to read, you want to share the excitement that books hold. Get Caught Reading Month encourages people to pass along their love of all things written by asking folks to take pictures of themselves reading their favorite book and uploading those images to social media. Movie and TV celebrities, sports figures, authors, illustrators, teachers, mom, dads, grandmas and grandpas, and kids of all ages take part in this favorite annual event. Why don’t you?!

The Summer Nick Taught His Cats to Read

One summer Nick, Verne, and Stevenson did everything together. Nick is a little boy and Verne and Stevenson are two very different cats. Nick and Verne loved to spend time near the water—Stevenson tolerated it. Nick and Verne slept happily in a tent under the stars—Stevenson barely shut his eyes. While Nick rode his bike Verne eagerly sat in the front basket—Stevenson hunkered down in a box on the back. But when Nick sat down to read, both cats had similar ideas of fun—like lying on top of the book—and Nick could hardly read a sentence.

“So Nick decided to teach them how to read. He made flash cards and started with easy words” like “ball,” but Verne and Stevenson just wanted to play with the ball. While the three had a picnic on the lawn, Nick brought out his flashcards and “pointed to the word food. The cats ignored him.” When the cats snoozed Nick woke them with a sign. “‘This is no time for an N-A-P!’” he said. Neither cat responded well, so Nick tried a new tactic. He made word-shaped flash cards. Verne took a nibble of “F-I-S-H,” but Stevenson hid under the bed.

Nick began to see that Verne liked stories about cats and fish. “Verne loved fish. He followed along as Nick read, learning the sounds of the letters.” He even read by himself, discovering new stories, especially 2,000 Leagues Under the Sea. But Stevenson? When Nick spelled words for him, he merely ran under the porch, hissing. By this time Verne was reading so many books that he got his own library card and Nick needed help carrying all of his books home. Nick and Verne had fun acting out their favorite stories, but they missed Stevenson.

One day “Verne discovered a treasure under the bed—a great stack of Stevenson’s pirate drawings. “‘Wow!’” Nick whispered. “‘Stevenson drew a story.’” Nick and Verne put the pages together and began to write words to go with them. When the story was finished, Nick, Verne, and Stevenson “squeezed under the porch, gave Stevenson an eye patch, and read The Tale of One-Eyed Stevenson and the Pirate Gold. Stevenson listened and followed along. He didn’t run away. Or hiss. Not even once.” 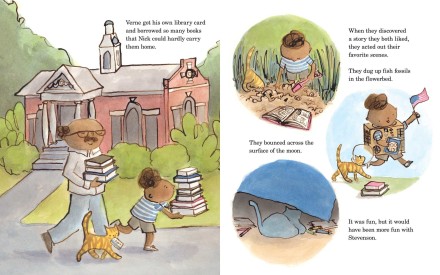 Suddenly, Stevenson couldn’t get enough of books.  Even before Nick woke up, Stevenson could be found with his nose in Treasure Island or another adventure book, and whenever Nick and Verne played pirates, Stevenson joined in. He helped bring down “scurvy mutineers” and found buried treasure. Now the three readers do everything together. They “hunt for dinosaurs in the lost world behind the garden…race around the yard in eighty seconds…and journey to the center of the basement.” And while they all like to read on their own, they also like it when someone reads to them. “Hmmm…,” Nick thinks, maybe next he could teach his cats to talk. “‘Meow,’ says Stevenson.” 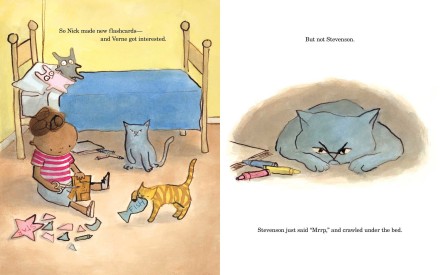 Curtis Manley’s adorable tribute to reading and learning to read, using cats with very different personalities, is inspired. Just as some people respond more to the words while others are attracted by the pictures, Verne and Stevenson have their own relationships with books. The names of the cats and their preferred reading material are also reminders that books are personal, and disinterest in one type of story does not reflect disinterest in all stories. Manley’s text makes for a joyful read-aloud as his language and phrasing is evocative, lyrical, and imaginative.

In perfect accompaniment, Kate Berube brings this creative story to life, illustrating the tender relationship between Nick and his pets as well as emphasizing the humor and distinct personalities inherent in orange-striped Verne and smoky-gray Stevenson that influence their journeys to literacy. Depictions of the various books Verne and Stevenson are drawn to highlight the literary references in the trio’s further play. Readers will want to stop and peruse the page of library shelves, where such books as “Harry Picaroon and the Swashbuckler’s Stone”, “Harold and the Purple Canon”, “Millions of Rats”, and “Where the Wild Pirates Are” wait to be checked out in the Pirates section.

Kids will eagerly want to adopt The Summer Nick Taught His Cats to Read, and it will snuggle in nicely on children’s bookshelves.

Discover “the facts, fictions, poems, and numbers” of Curtis Manley on his website!

View a gallery of Kate Berube‘s art on her website! 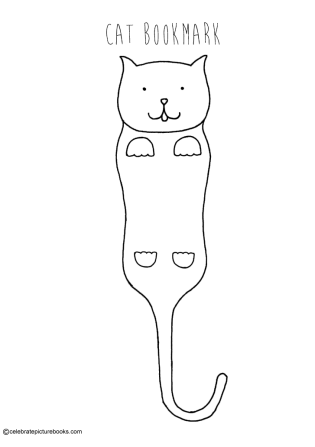 This want-to-be literary lion feels fine about reading! Let it hold your page while you’re away! Print your Feline Fine about Reading Bookmark and color it!