As we say goodbye to Get Caught Reading Month, let’s remember all of the great stories we’ve read and eagerly anticipate those that still await us in the days and months ahead! The long, relaxing hours of summer vacation are nearing, giving readers even more time to enjoy their favorite pursuit. So why not make a list of titles you’d like to explore this summer, and lead it off with today’s book that tells the true story of a very original teenager!

The Original Cowgirl: The Wild Adventures of Lucille Mulhall

Unlike most girls in the 1890s, Lucille didn’t skip rope “with her mama’s clothesline, she twirled it like a lasso. Whoosh…whoosh…snap!” While Lucille’s papa thought his daughter would be a great help around the ranch, her mother considered riding horses and roping steers unladylike. Lucille wasn’t interested in the regular pursuits of becoming a lady, however. Sewing and cooking were boring, and “riding sidesaddle was slower than a snail climbing a greased log.”

By the age of ten, Lucille was well versed in “mending fences, training racehorses, and herding cattle.” When she asked her father for her own herd of cattle, he told her that she could have one when she was old enough to rope and brand her own—something she could already do. Lucille’s mother worried about her when she patrolled the pastures where her cows grazed. They were threatened by “longhorns, wolves, and coyotes so mean they could turn the strongest cowboy into buzzard food,” but Lucille could snatch those varmints with her lasso in no time flat. The only thing Lucille was afraid of was not being allowed to work on the ranch, so she hid her bumps and bruises.

When Lucille was thirteen, her papa took her along on some rough-riding and roping competitions he had organized. When people saw how talented she was, word got around. Newspapers called her a “daring young girl who ‘held the audience in a breathless spell’” and said she was “‘the envy of half the men.’” But now that she was a teenager, Lucille’s mama sent her to a boarding school where she was to learn how to be a lady. 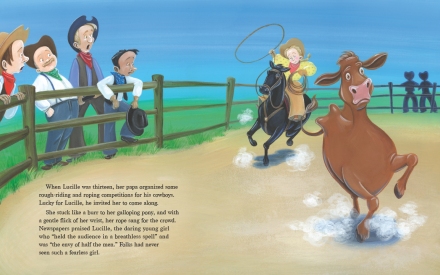 When she returned home at the end of the year, her papa presented her with a gift—a “beautiful sixteen-hand chestnut horse named Governor. Right off, Lucille could see that he would make a perfect trick horse. That summer Lucille, her papa, and the other cowboys were invited to perform for Vice Presidential candidate Teddy Roosevelt. At first Lucille’s mother said no, but she later relented, with the stipulation that “it would be Lucille’s last appearance.”

Lucille was a star, demonstrating her riding and roping skills for 25,000 people. Teddy Roosevelt was so impressed, he suggested Lucille have her own show. Soon, Lucille was traveling around the country, thrilling audiences by breaking broncos, lassoing and branding steers, and performing tricks like roping “five galloping cowboys all at once.”

Lucille entered her first professional steer-roping competition when she was just fifteen. She was the first women ever to compete in this kind of event. Some cowboys laughed at her, but she didn’t care. When the steer was released from the pen, Lucille took off after him. Her first throw of the lasso landed but broke. Quickly she tossed another and “flipped him up like a flapjack.” She jumped off her horse and in 29 ½ seconds tied the steer’s feet. Her time was “faster than all the men!” 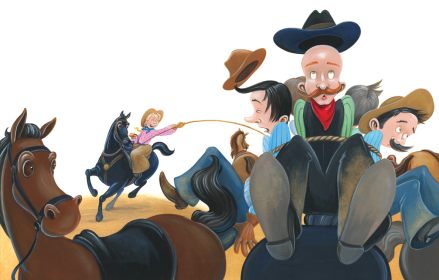 Lucille went on to break the world record for steer roping. Plenty of people still thought Lucille belonged in the home instead of on horseback. “But her home was always on a horse with the sun on her cheeks a lariat coiled in her hand, and the boundless Oklahoma prairie rolling out in front of her.”

More information on and a timeline of Lucille Mulhall’s life follow the text.

With her folksy storytelling, Heather Lang transports readers to the prairies of the Wild West, where a girl with phenomenal riding skills captured the attention and hearts of Americans. Young readers will be fascinated by Lucille Mulhall’s development from a 10-year-old prodigy to the star of her own stage show in only a few short years. Lang’s expressive period-perfect vocabulary allows all kids to ride the range while they learn about this young woman who broke stereotypes, championed the cause of women, and still serves as a role model for all who wish to live life on their own terms. 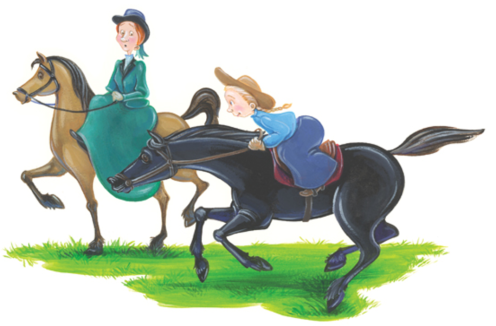 With her downhome, action-packed illustrations, Suzanne Beaky lets kids watch as Lucille lassos a wolf, ropes a steer, preforms tricks, and celebrates her record-breaking performance. Lucille is a wide-eyed force of nature in her split skirt and braids as she twirls her rope for serious ranch business and for entertaining the crowds, whose stunned expressions reveal just how original Lucille was. Clothing, hair, and mustache styles, as well as depictions of horses, steers, and the vast green prairie make The Original Cowgirl as fun as it is informative.

For kids interested in the Wild West, early American history, biographies, or a story about true individuality, The Original Cowgirl: the Wild Adventures of Lucille Mulhall is a great addition to home bookshelves and public and school libraries.

Discover more about Heather Lang and her books on her website!

To find out more about Lucille Mulhall through videos, photographs, and fun activities, click here!

Learn more about Suzanne Beaky and view a gallery of her artwork on her website!

Can you lasso the eighteen Wild West-inspired words in this printable Yee-haw! Word Search? Here’s the Solution!